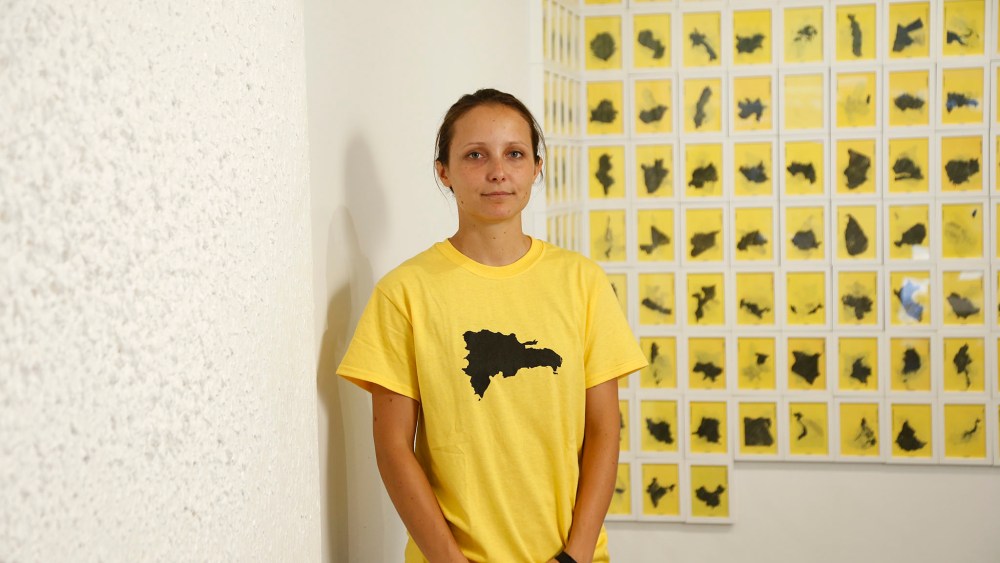 “I’ve always been quite obsessed with maps,” says artist Capucine Gros on a sunny afternoon from Catinca Tabacaru Gallery in the Lower East Side of Manhattan, where she was putting the finishing touches on her solo show “Implicit Borders: A Cartography of Free Will.” Gros grew up between Switzerland, France and China before landing in New York, where she currently resides. “Traveling always feels like putting pieces of a puzzle together and also just the concept of nationality itself,” she continues, speaking with a hard-to-place accent. “Not really knowing where you’re from exactly, and wondering, well, why are we so constrained by these lines? They are necessary, but how much importance do we let them have in our lives?'”

She explores the concept of borders — emotional and physical — through much of her work. “Borderline,” hanging on one wall of the intimate gallery, is a stitched world map outlining natural borders in thick thread and man-made borders in thin ones, including those which are contested. “It’s thinking about how abstractly we divide the earth,” Gros explains of the piece’s origin. “I can give the striking example of Antarctica. It slides between countries, literally, so there is a piece that Australia claims, there’s a piece that New Zealand claims, a piece that France claims, Argentina, Chile and U.K. as well. Some areas are in conflict, they all say they own a slice,” she says, pointing out slivers of the southernmost continent.

Mirroring that piece in size and tone on the opposite wall is “Human Strokes,” a relief-terrain abstract global map. Gros has been plotting worldwide deaths from the news, making one mark per person using white acrylic paint, since 2010. She will add layers to the monochrome painting throughout the span of the gallery show everyday at 5 p.m. The peaks of paint have caused areas of the canvas to dimple under the weight.

“It’s not about it being morbid,” Gros says of the concept. “It’s another way of counting life. It’s about acknowledging life in an equal way. Whether you hear about 1,000 [deaths] there or one [death] here that gets a lot of headlines, it still gets the same mark.”

The most attention-grabbing section of the exhibit is a back corner of the gallery, which is tiled with bright-yellow prints featuring the silhouette of every country — recognized and claimed — in the world. “Approximately 199” is also part performance piece; Gros has been wearing silk-screened T-shirts bearing each individual print everyday since March 20. She began with the least populated country (Vatican City State) and, going in order of increasing population, will finish the performance on Oct. 5 wearing a shirt of China.

“Isolating each shape was a really interesting process because there are some shapes that you know right away, and you realize it’s because this country is often talked about on its own, while others are so abstract — especially Africa,” she says, wearing the T-shirt for the Dominican Republic. “We often see Africa as a continent, but never as individual countries. They are always treated as a whole rather than individual places with their own characteristics.”

Although many of the dismembered countries are difficult to place out of context — how many New Yorkers would recognize the outline of Tajikistan, for instance? — the shirts become inevitable conversation starters. “Sometimes people recognize it’s a country, but they don’t know [which],” she says. “One time, this guy was, like, ‘You know, you have Ghana on your shirt!’ I was, like, ‘Yeah, I know!'” To prepare for the inevitable conversation that the shirts generate, she starts each morning by reading a bit about the country she’ll be wearing that day.

In the opposite corner, on two smaller canvases, Gros has plotted maps based on love. Beneath each canvas is a stack of blank maps printed on colorful paper for visitors to take and fill out for themselves. “Every person that I love or loved — wherever that was in the world,” Gros says of the left canvas containing only a handful of markings. “And these are people I could love,” she continues, gesturing toward the other canvas a few feet away, which is heavily populated with red dots. “Really, it could be anyone in the world. It’s covered.”

The exhibit will take place through July 30.