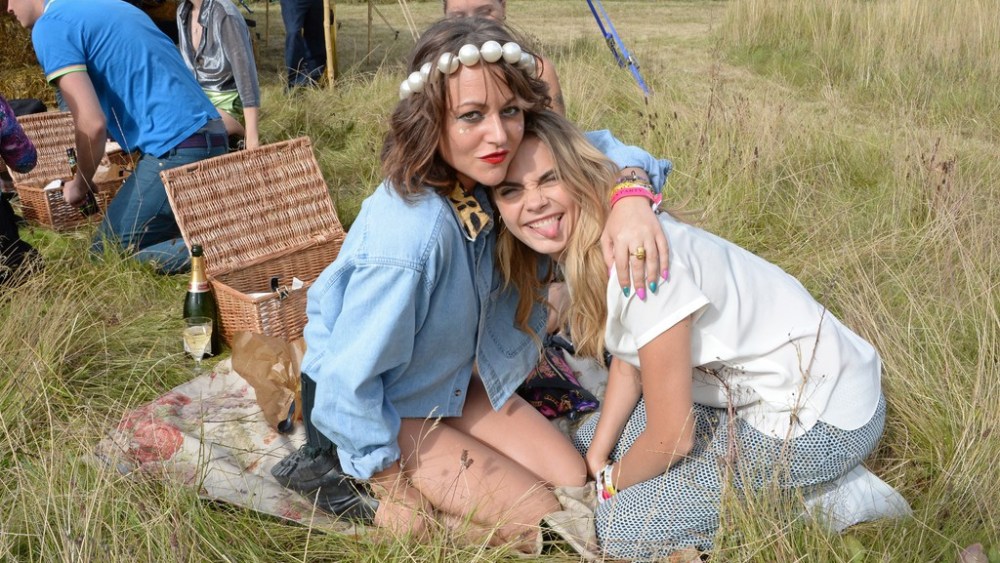 Cara Delevingne was looking very much the wild English rose as she sat cross-legged on the grass to watch her pal Will Heard perform an acoustic set at Wilderness Festival in Oxfordshire, England, on Saturday.

And she’s clearly ready to ramble: She said her oxblood Mulberry bag contained “my phone, eyebrow gel, Berocca [fizzy vitamin pills], camera, passport and Daim [chocolate] bars.” Delevingne and Mulberry cohosted a garden party during the festival, which ran from Thursday to Sunday.

Gold Mulberry balloons and tall grass swayed in the breeze as the sun bore down on the garden, which had been set with hay bales covered with tartan or rose Mulberry picnic blankets. Baskets were filled with goodies from British chef Giles Clark, and Champagne was served up in vintage glasses.

Booth, whose film “The Riot Club” is headed to the Toronto Film Festival in September, was working a low-key look, dressed in jeans, a T-shirt and a blue Warner Bros. baseball cap. “It’s the only one that really fits my head well, although it’s not a bad message to be sending out: ‘Please keep hiring me,’” he said.

Booth said he’s a dab hand at festivals. “I’m the one that will go from Thursday to Monday and not shower at all — and be OK with that.” Reid, Booth’s costar in “The Riot Club,” was sporting similar headgear and had clearly tapped into the true British festival spirit.

“We did Glastonbury in June and made a few key learnings.…Mostly, we’re not doing Winnebagos again. They’re too posh. Next year, we’ll get a tepee in the area that overlooks the entire festival,” he declared.

Inside the festival, there was a “Mulberry Loves Craft” tent, where festivalgoers could meet the brand’s craftsmen and make their own monogrammed leather bracelets at workshops, which were fully booked.