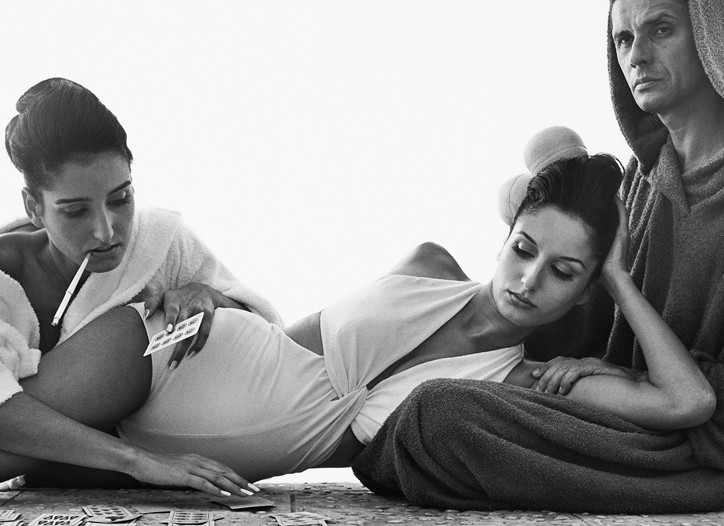 CELEBRATING AVEDON: Five books, three shows, a catalogue of the archives — The Richard Avedon Foundation has been busy since the famed photographer’s death in 2004. And at Christie’s Paris on Nov. 20, the foundation will auction 60 works — the largest group to come to market — to endow philanthropy supporting photography.

The sale’s centerpiece is an enormous print of the “Dovima With Elephants” (1955), which hung in Avedon’s studio for 30 years. The iconic shot of the willowy model in a Dior evening gown and bracketed by circus pachyderms is expected to fetch a half-million of the group’s $4 million to $6 million estimate. Also on offer: shots of Veruschka, Twiggy and Jean Shrimpton.

But fans don’t need to hop a flight to Paris for an Avedon fix. The Museum of Fine Arts Boston is running “Avedon Fashion: 1944-2000” (through Jan. 17), the first retrospective focused solely on his fashion work since 1978. (He being a portraitist at heart, Avedon’s shots aren’t really about the clothes, but about the body underneath — celebrated or distorted by fabric.) A 1967 portrait of Audrey Hepburn in a black headdress elongates her neck, à la E.T. In 1998, he shot Carmen Kass and Audrey Marnay unrecognizably swathed in nappy, boiled wool by Hussein Chalayan. They look like cleverly sculpted topiaries or ancient statuaries toppling against each another.

Later in his career, Avedon created his extensive New Yorker portfolios and the Versace campaigns. A 1993 image features a nude Marcus Schenkenberg in the role of an abducting Greek god, tugging the hand of reluctant mortal Stephanie Seymour.

SWEET CAROLINA: Carolina Herrera is hitting several milestones this year, and has one more reason to celebrate. She will be the recipient of this fashion week’s Mercedes-Benz Presents honor, singling out her Sept. 13 show at the presentations at Lincoln Center. “To be recognized in such an important year in Mercedes-Benz Fashion Week history is, without question, a wonderful honor,” Herrera said.

This is turning out to be a significant year for the designer. She is marking her label’s 30th birthday and the 10th anniversary of her 954 Madison Avenue Collection flagship, as well as opening a CH Carolina Herrera boutique at 802 Madison Avenue. “Carolina Herrera’s understated grace, precision design and attention to detail uphold the Mercedes-Benz commitment to quality,” said Lisa Holladay, Mercedes-Benz USA’s manager of brand experience marketing.

A MATERIAL LAWSUIT: A lawyer representing L.A. Triumph Inc., the California-based apparel manufacturer that is suing Madonna in federal court for trademark infringement over her Material Girl junior line for Macy’s, said his client has trademark rights stemming from first use of the name. Attorney Peter Afrasiabi said the company has sold its own Material Girl line to retailers such as Nordstrom and Ross Stores since 1997. The fact that Madonna’s song “Material Girl” topped the pop charts in 1984 “is not germane,” Afrasiabi said.

“If she’s going to be in junior apparel, my client certainly has a strong problem,” with the name use, he said. The firm has cited “deception” in the marketplace.

SELFRIDGES, DOLCE & GABBANA SPLIT: The U.K. department store group Selfridges will no longer carry Dolce & Gabbana or D&G’s collections. “We constantly seek to improve the diversity and presentation of our brand portfolio and address the demands of our ever-evolving fashion and accessories departments,” the company said. “To this end we have found that we are unable to accommodate Dolce & Gabbana and D&G in our mix going forward.”

The move followed reports in the British press that Dolce & Gabbana executives were disgruntled that the two collections’ locations in the store had been moved. A Selfridges spokesman declined to elaborate on the statement, and a Dolce & Gabbana spokeswoman could not be reached for comment. The retailer carries both labels’ fall collections, but will stop selling the lines when the spring collections would have hit the sales floor. Selfridges did not comment on whether Dolce & Gabbana’s makeup line would continue to be sold at the store.

EDUN’S LOSS: Edun, the Dublin-based ethical clothing label founded and controlled by Bono and his wife, Ali Hewson, recorded a loss of $8.7 million last year, according to financial statements filed with Ireland’s Companies Registration Office. That figure widened from a $4.6 million loss for the previous fiscal year. Edun — whose shareholders include minority stakeholder LVMH — has net liabilities of $10.4 million, compared with liabilities of $19.1 million the previous year. The statement noted that the company is financed by shareholder loans, and the shareholders have confirmed they will not seek repayment for the foreseeable future and “will provide the company with sufficient finance to ensure the continued operation of the company.” The firm took out shareholder loans of $11.4 million for the 2009 fiscal year. Edun Americas Inc, a wholly owned subsidiary of Edun Apparel Ltd., recorded a net profit of $37,879 for the 2009 fiscal year, a 42 percent fall compared with $65,818 the previous year.