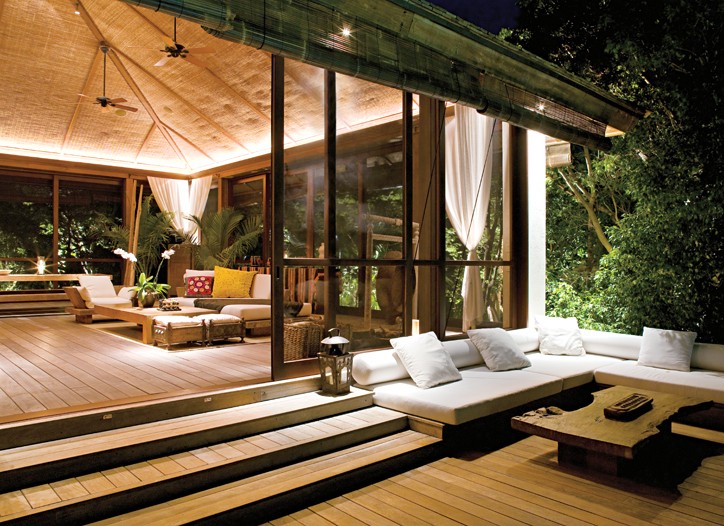 NEW YORK — Come fall, the Council of Fashion Designers of America is moving from the runways into designers’ homes.

In September, the CFDA will publish with Assouline “American Fashion Designers at Home,” a coffee-table book that will feature images of homes from some 115 of its members, including Carolina Herrera’s opulent Upper East Side digs, Donna Karan’s Zen-like Parrot Cay retreat and Josie Natori’s Paris pied-à-terre.

“This is the ultimate voyeuristic journey,” the book’s author, Rima Suqi, said. “If you are a New Yorker, and like me, are always looking into people’s windows if the lights are on, this will feel very similar, except that they are all the homes of fashion designers.”

Most of the images have been published before, and the interiors are as diverse as the designers behind them: for example, Elie Tahari’s modern SoHo triplex; Francisco Costa’s Murray Hill home in multiple shades of gray; Bob Mackie’s colorful explosion in Los Angeles, and the Kentucky horse farm that belongs to Mark Badgley and James Mischka. Some of the art is new, however, including Band of Outsiders designer Scott Sternberg’s Polaroid of his living room featuring stacks of books topped with a colorful collection of troll dolls.

Just because they are designers doesn’t mean their taste extends into the home. “A lot of people have help, they just don’t always admit it,” Suqi said. “But these designers all read home magazines and have a lot of books on design, and some of them even trained in architecture or interior design. A lot of the designers have fun with their homes.”

In some cases — Betsey Johnson’s vivacious apartment or Lauren’s Double RL ranch — the interiors are aligned with the designers’ fashion sentiments, but there are quite a few cases in the book when the two couldn’t be further apart. Lela Rose’s TriBeCa apartment, for instance, was created by Work Architecture Co., whose architects honed their craft with Rem Koolhaas. The ground-floor loft’s modernist feel is in contrast to Rose’s more feminine designs.

Suqi supplements the visuals with anecdotes, such as the time it took some to renovate their spaces. “Vanessa Noel took the prize for taking the longest with seven years,” Suqi recalled. “Kate and Andy Spade took three years.”

J. Crew’s Jenna Lyons, meanwhile, took two years to renovate her Park Slope brownstone, during which time she lived in her husband Vincent Mazeau’s art studio with five others, a dog and two cats. “She was sleeping on a loft bed and had to go up and down a ladder while eight months pregnant,” Suqi said.

“We started doing books as an opportunity to create our own editorial voice around our members,” CFDA executive director Steven Kolb said. “The first one, ‘American Fashion,’ was a huge success, so it was logical to go to accessories and men’s wear. It’s a nice way to talk about the American fashion industry and our CFDA members, and it shows the spectrum of talent and difference of creativity.”

The foreword was written by Margaret Russell, editor in chief of Elle Decor, which was also responsible for many of the images in the book. The $65 tome will benefit the CFDA Foundation.

Suqi’s biggest discovery was probably Ben-Amun designer Isaac Manevitz’s New Jersey digs. “He has a very significant collection of Memphis furniture at his house, probably one of the most significant ones in America.”

The writer was also quite taken by the beauty of Ralph Rucci’s Upper East Side home. “Sometimes you will find that for a man of a certain generation, the apartments have a similar aesthetic,” Suqi said. “They are perfectly tasteful but there is a sameness and safety to them. But Ralph Rucci’s was not one of them. His was incredibly luxe and different, and he had worked with Susan Gutfreund. Of course, if you’re friends with Susan Gutfreund, you can’t really go wrong.”