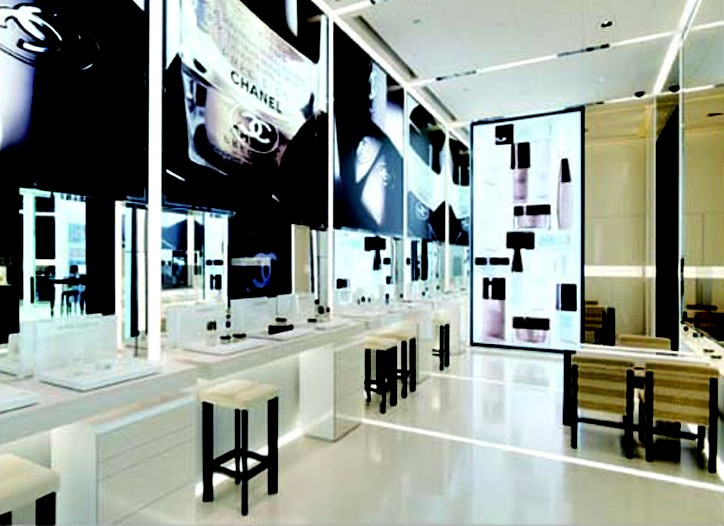 TOKYO — Chanel opens its first freestanding beauty store here today in a bid to make buying lipstick just as luxurious as shopping for a quilted handbag.

Located on the ground floor of a new shopping and entertainment complex in the trendy Aoyama district, the Chanel store carries the French brand’s full range of fragrance, cosmetics and skin care items. The same building, featuring a stunning asymmetrical glass tower, also houses other beauty tenants, including Bobbi Brown and RMK.

Richard Collasse, president of Chanel Japan, said the all-beauty retail concept should broaden the brand’s reach, especially to aspirational luxury consumers. Although he’s frank when talking about the depressed state of the prestige beauty market in recessionary Japan, he said it’s the perfect time to launch a new concept.

“It’s not a business decision,” he chuckled. “Because if it were a business decision, we would not open.” Although the executive declined to discuss financial details, he allowed that this is an expensive project in terms of rent, design and logistics.

“You want to tell the consumer, ‘Look, we understand that you are not coming, but don’t forget that this is what we are,’ ” he said, describing Chanel as “the ultimate house of luxury.”

To that end, Chanel isn’t resorting to discounts or freebies to drum up business — even in extremely tough times. “I know that if I were doing gift-with-purchase….I would have 10,000 people waiting, but that’s not how we want to be perceived as a brand.”

Although the freestanding store might be perceived as a step away from the traditional beauty retail channel of department stores, Collasse stressed that this is not the case. Chanel beauty sells in about 170 doors in Japan but could easily grow to 400 or even 500 over time, he said.

Collasse said department stores will continue to play a significant role in Chanel’s beauty business — also because rolling out freestanding stores for the category is not financially feasible. Chanel intends to keep the Aoyama boutique unique, and there are no plans to replicate the concept elsewhere in Japan. Collasse said he’s not aware of intentions to take it to other countries either.

“This is the first time in history that we see such a drop across the board. I mean there is no brand which is untouched…so are we,” he said. “Honestly it’s mind-boggling. Even when you have been in Japan, like me, for 38 years and you think you know the Japanese consumer. As a matter of fact, you never know them enough.”

Collasse said he’s not aiming for an “explosion of sales” at the new store but rather looking to cultivate customer loyalty through an intimate level of service and pampering not available at department stores. He declined to give a sales forecast but said he expects the boutique to generate turnover at the same level of a top cosmetics corner in a big department store.