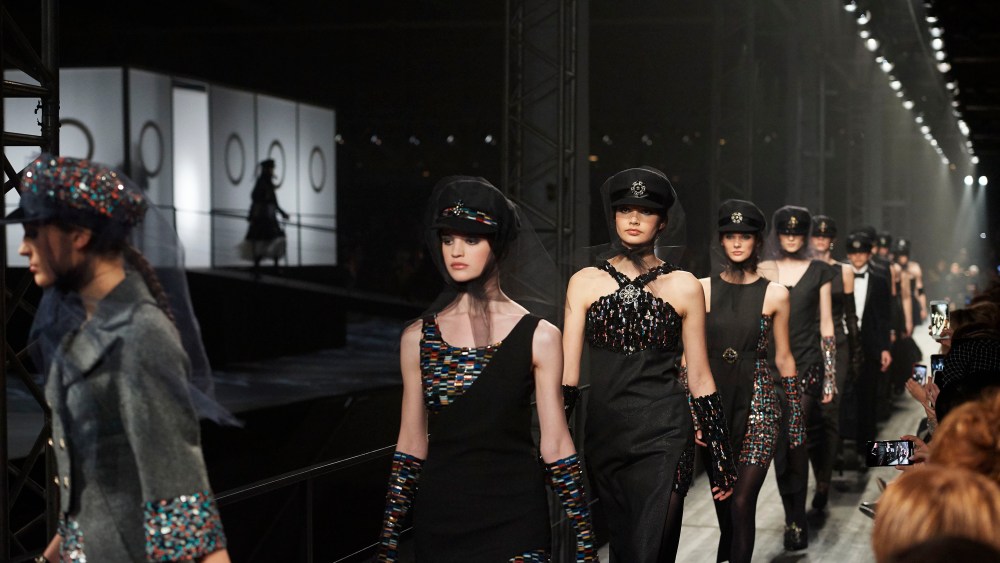 MOSCOW — Chanel, which kick-started the international resort season with its May 4 spectacle in Paris, hit the road to stage a fashion show in Moscow on Thursday night, parading its Paris-Hamburg Métiers d’art collection in a vast industrial space.

The event drew a wide swath of Russia’s elite — all decked out in tweeds, black-and-white and double Cs — who drank in an imposing set reminiscent of a shipyard, complete with lighting effects, making the floor undulate with waves.

The show was set at Pavilion 69, part of the vast trade show and amusement park VDNKh, previously called the Exhibition of Achievements of the National Economy. Its famous attractions include a gilded fountain spewing water from sheaves of wheat — a symbol of Chanel — and the Worker and Kolkhoz Woman sculpture of two giant figures with a sickle and a hammer raised.

Andrei Kirilenko, commissioner of the Russian Basketball Federation and a former NBA star, said he’s been to Paris and New York fashion weeks, and the Moscow showing lived up to those standards. “I was impressed by the show and the organization — Chanel knows how to do it,” he said.

Enjoying some oysters, Alex Chzhen, art director of Kazakhstan Fashion Week, had one lament: “Everything was great, but not perfect as Karl was not here,” he said, referring to Karl Lagerfeld, who rarely attends repeat shows, given his workload designing collections for the French house, Italian label Fendi and his signature brand.

“I am Russian, but I live in Berlin and I am proud of my people and how they turned out for this event,” said Anna Vorobeva, wife of the current coach of Russia’s national hockey team. “When Chanel invited me to Moscow, I was over the moon.”

According to the house, the fashion event was to reinforce its “commitment and attention” to its Russian clients, a day before the Paris-Hamburg collection hit stores. (It was originally shown in the German city in December.)

The brand last presented a fashion show in the Russian capital in 2009, its Paris-Moscou Métiers d’art collection, and its roving “Little Black Jacket” photo exhibition touched down in Moscow in 2012.

On Friday, Chanel invited 200 students from a variety of Russian fashion schools to view the Paris-Hamburg collection up close, and to hear a master class delivered by Bruno Pavlovsky, the brand’s president of fashion, who spoke about a business model hinged on the creative dialogue between Lagerfeld’s studio and Chanel’s ateliers.

Byzantine motifs from the Russian empire still figure in Chanel’s jewelry and embroideries, and ties between the house and Russia date back to the Twenties, given founder Gabrielle Chanel’s fascination with Russia and its then aristocracy.