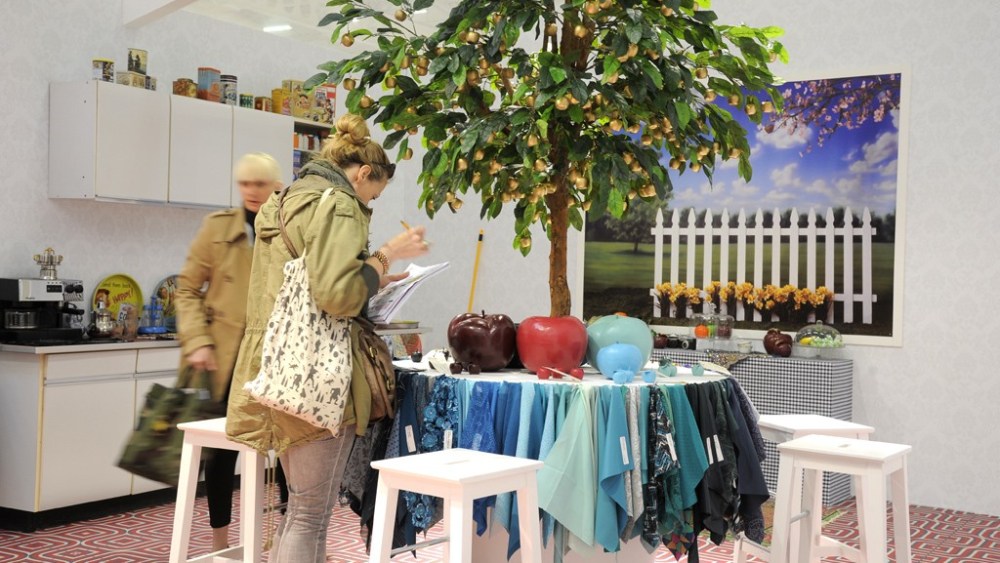 PARIS — Despite ongoing concern over Europe’s debt crisis and the impact on consumer spending, weavers and manufacturers showing at the Première Vision Pluriel and Texworld fairs here said business is picking up, slowly but surely.

Many also noted a trend toward making goods in the home country of a brand as costs rise globally and quality control becomes more important.

A transportation strike on Sept. 17 marred the opening of the international textile and apparel manufacturing shows Texworld and Apparel Sourcing, with 14,400 visitors from more than 100 countries attending the four-day event, 6 percent less than a year earlier. Turkey, South Korea and China were strongly represented out of 816 exhibitors at Texworld, reflecting a measured return to sourcing small orders closer to Western Europe, while still relying on Asia, and especially China, for larger-volume orders plus technological know-how.

Première Vision Pluriel saw a 4 percent uptick in attendance versus last September, to 60,716 visitors, of which 70 percent were from abroad. The event saw a resurgence of U.S. buyers, with an 8 percent increase year-on-year. The turnout of Japanese buyers increased by 19 percent.

“I predicted a year-and-a-half ago that Japan would have a feel-good factor following the recovery after the tsunami, and this has happened,” said Peter Ackroyd, president of the International Wool Textile Organization and a consultant for The Woolmark Co., which is pushing its Cool Wool program to “major Japanese retailers and clothing manufacturers” as a good fit for the country’s agenda of energy saving.

Despite the challenging context, several mills said their value as heritage companies with a legacy for quality and savoir faire has helped them weather the storm.

“I feel it is inevitable that we will see a shrinkage of quantity, with all the favor going to quality,” said Nino Cerruti during an interview at the Lanificio F.lli Cerruti dal 1881 booth. “Whereas in the past quality was an intrinsic fact, today it is a much more complex subject.”

Certain traditional weavers are benefiting from the vogue for goods made in Europe.

“The whole provenance thing is doing well,” said Beryl Gibson, a textile and color consultant for the U.K. Fashion & Textile Association, adding that with solid support from British designers “the British mills here are flying at the moment.”

Didier Provent, president of Marc Rozier, one of the few remaining Lyon, France-based silk manufacturers, said with demand rising for French fabrics, several “major foreign clients” who had switched to working with Chinese partners are back in the picture.

Performance fabrics with added value were topical at PV.

“Innovation is everywhere in this industry,” said Sophie Bramel, coauthor of the book, “High-Tech Fabrics & Fashion,” which launched at the event. “Every single company at this show is looking to make a better product that lasts longer, with lighter weights, that is easier to care for, and that will keep you warm when you need warmth and cool when you need coolness.”

Shower-proof and stainproof fabrics were key themes showcased by the UKFT, with eco-oriented technical finishes a growing trend, such as Abraham Moon’s shower-proof Shetland wool with a dermatologically tested natural beeswax finish. Henry Bertrand had a stainproof pure silk, and Holland & Sherry had a stain-resistant 150s wool.

“Wine or food simply beads up and rolls off the fabric — it’s ideal for messy men,” said the UKFT’s Gibson, who believes that machine-washable wools that do away with dry cleaning bills have a big future, such as a machine-washable black Bedford cord by Robert Noble on view.

Masters of Linen presented a range of linen knitwear items made in collaboration with various weavers, spinners and knitters, including Sophie Hallette, John England and Loro Piana. Masters of Linen will hold its first international congress on linen in Brussels this month.

Faced with steep prices on natural raw materials and the challenge of servicing an increasingly global market, designers were scouting innovative blends.

“With e-commerce, you’re selling to everywhere, from Paris to China to Rajasthan to Argentina, so you have to find a middle ground, especially for coats,” said Carven’s Guillaume Henry. “Linen can be an alternative for hot countries. Prices on so-called noble raw materials like wool and silk have [risen], so today we have to find alternatives, like wool polyamides that look like wool.”

“It makes the fabric…really dense, tightly woven,” said Lanvin men’s wear designer Lucas Ossendrijver of the high-twist yarns, adding that he was intrigued by the technical fabrics on show, with mixes of polyester and nylon, and nylon and cotton that were “quite stiff, with quite a lot of body.”

“It’s all about going back to basics — cotton, wool, silk gabardine, tennis stripes, a Prince of Wales check,” said AMI’s Alexandre Mattiussi. “Even technical cottons are very dry and natural.”

For Paul Smith, the fall 2013 season is one of extremes — “A lot of the fabrics are either quite stiff and hard or very soft.”

“We’ve been through some difficult years but our feeling is that it’s our turn again,” said Thomas Andreae, managing director of Niedieck.

There were reasons to celebrate the 15th anniversary edition of Texworld in Paris, thanks to increasingly diversified, flexible sourcing, added quality and innovation. Buyers said a wider choice of sources helped better serve tight-budgeted customers shopping in smaller quantities for fashionable items.

“If the minimum order quantity is too high in Pakistan, then we might go to Istanbul for a smaller order,” said Ben Klaassen, director of sales for Netherlands-based jeans company Reell. “The trend in the market is that you can’t sell high quantities of the same item, so you go to Turkey, Portugal or Prague.”

“Customers do complain about prices, but that’s a lot better than customers complaining, ‘you have nothing new,’” said Taiwan-based Unitex manager Joseph Chang, who noted that the company was expanding to Brazil, Eastern Europe and other parts of Asia.