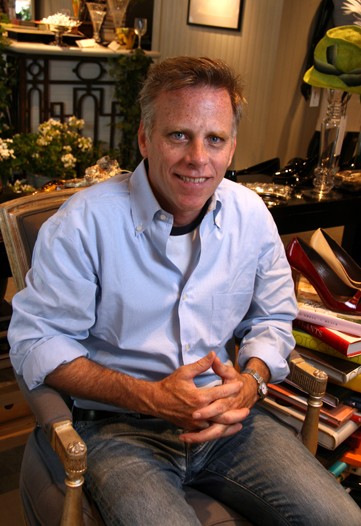 Funeral services will be held Wednesday at Blessed Sacrament Church in Manhattan for designer Charles Nolan, 53, who died Sunday at his uptown apartment.

The cause of death was liver cancer, according to his partner, Andrew Tobias, who serves as the Democratic National Committee’s treasurer.

Nolan’s all-American ideals extended from fashion to politics, so much so that he exited the industry temporarily in 2003 to help Howard Dean with his presidential bid.

Throughout his career, the Brooklyn-born designer created clothes with an easygoing American style much like his own. With his boyish looks and preppy style, Nolan could often be seen striding purposefully through the streets of New York in a button-down shirt with the sleeves rolled up and jeans. His take on American sportswear involved updating toggle coats, striped shirts and other classic favorites. Before launching his signature collection in 2004, Nolan designed for a bevy of labels including Anne Klein, Ellen Tracy, Blassport, Tahari, Christian Dior and Bill Haire.

Fashion insiders really did a double take in 2003, when he volunteered for Dean, a move that even floored the candidate. In a phone interview Sunday, Dean said, “I was shocked. I’m not a big fashion aficionado. I didn’t realize what a big deal Charles was until I became chairman of the DNC a few years later and half the senior management was wearing Charles Nolan. He was a wonderful, matter-of-fact person. He was thoroughly unpretentious and he didn’t put up with pretentiousness in others.”

The designer, who was instrumental in the 2004 fund-raising revolution that political experts said catapulted the gay and lesbian community into a major force in the Democratic Party, never lost his thirst for politics or civic duty. How many other designers have Web sites with a link to the DNC site? And just last fall, Nolan was among the designers who hit the street for a Save the Garment Center rally.

To drum up support for Barack Obama in 2008, Nolan welcomed fashion’s elite to his downtown studio for a “Runway for Change.” He was among the first contemporary designers to woo political types — Tipper Gore wore a Charles Nolan ensemble when she and her husband shared what would become a much publicized kiss at the 2000 Democratic Convention. In an interview with WWD in the summer of 2007, Nolan, whose clients included Hillary Rodham Clinton, intimated a motive for getting closer to the world of politics. “One of my goals was always to dress the president of the U.S., and I did mean a woman president,” he said, chuckling. “Though I’d like to dress Barack Obama, as well.”

Cozying up to politicians and appearing in an IBM ad in 2001 were not the only signs of his foresight. In the fall of 2008, he recruited a mishmash of models including Dara Torres, his retired police detective aunt, Tobias’ mother and a few famous friends like Kerry Kennedy. Reached by phone Sunday, Kennedy said, “Being in a fashion show is every girl’s dream but it was funny to be in one at the age of 45. You sort of imagine yourself as doing one at 18. But Charles had this way of making everyone around him feel that they were at their best so it didn’t matter that you hadn’t been to the gym and that you had had too much Häagen-Dazs. It was so much fun and so full of joy and beauty.”

Another fresh idea for an American designer was his decision to offer a range of price points from T-shirts to luxury apparel, and to sell gifts, home goods and furniture in his store. “To me, the key is that the value is both real and perceived,” Nolan said.

In early 2004, Nolan designed an exclusive label for Saks Fifth Avenue. He was also among the first to lend a helping hand to other designers during the financial fallout after the collapse of Lehman Bros. Nolan invited Michael Bastian to show at his downtown studio. More recently he used the space for even more charitable purposes like one for Toms Shoes. Right before Christmas Nolan used his blog to encourage shoppers to buy Toms Shoes, which donates a pair of shoes for every pair it sells.

Growing up in Hempstead, Long Island, the fifth of nine siblings, Nolan made costumes for the plays they put on and watched Sixties British movies studiously. His brother Kenneth, who works in design at Calvin Klein, said, “We used to share a room growing up and it drove me crazy. I couldn’t understand why anyone would watch them. Later on I think he used them for inspiration for a few collections.”

After graduating from the Fashion Institute of Technology, Nolan cut his teeth in the fashion world working with Frank Tignino at Jerry Silverman, before moving on to Bill Haire, and eventually Blassport. In the early Nineties, he started a 10-year run that helped make Ellen Tracy an international name, before jumping ship to revamp rival Anne Klein, replacing Ken Kaufman and Isaac Franco. Disillusioned with fashion in 2003, Nolan hit the campaign trail for Dean. Upon his return to New York, he launched his own label and landed the windows at Saks Fifth Avenue.

In addition to his father Philip, his partner Tobias, his brother Kenneth, Nolan is survived by sisters Virginia Nolan Vitto, Elizabeth Rooney and Carola and Joyce Nolan, as well as brothers Phillip, David and Edward. A wake will be held Tuesday from 6 p.m. to 9 p.m. at the Frank E. Campbell Funeral Chapel.