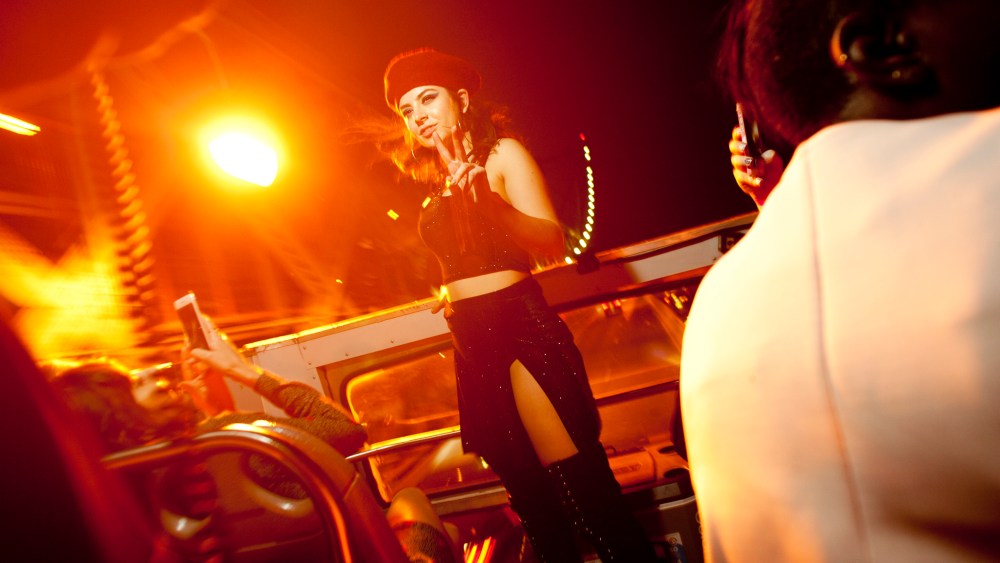 On Thursday evening, Charli XCX exited her temporary residence at the Mondrian Soho hotel in New York, and was greeted with a double-decker tour bus, the side of which was emblazoned with her face.“It’s like ‘My Super Sweet Sixteen,’” she exclaimed.

It was a perfectly accurate description of the evening, a full-out XCX-themed bash to celebrate the singer’s new collection for Boohoo.com.

Per the former MTV show’s fail-proof (well, until it was canceled circa 2008) formula, the venue, Brooklyn’s Villain event space, was transformed to realize a specific theme: Charli’s carnival, which ticked off all the typical ‘Sweet Sixteen’ hallmarks. Larger-than-life images of the special girl? A perpetually busy photo booth? A buzzy DJ spinning crowd-friendly rap hits? Check, check and check (thank you, Joe Jonas).

And as for that grand entrance? Post-initial shock, Charli loaded a posse of her closest friends, including radio DJ Emmie Lichtenberg and singer Ryn Weaver, onto the top deck, where the crew swigged Champagne and passed cans of Heineken around during the approximately 20-minute journey from Soho to Brooklyn. “It’s f—ing weird,” the signer said of her current status, atop a bus with her face on it. “I didn’t realize it was going to be like that…It’s giant. It’s weird.”

She made the most of the weird situation, posing toward the front of the bus as it traveled over the Brooklyn Bridge, her two-piece Charli XCX-for-Boohoo ensemble glinting in the moonlight.

Right, about that collection. “I was very hands-on with this,” she said of the leopard, glitter and velvet-heavy collection, which lands on the site Sunday.

Any favorites? “I wore this silver leopard print two-piece on stage with Taylor Swift in Toronto, Can., and that’s definitely my favorite piece,” she said. “I love all the fur cuffs too, because you can just put them on any outfit and make it new.”

Upon arriving in Brooklyn, the singer worked the room, dividing her time between the elevated VIP area and the DJ booth. Circa 10 p.m., it was time for the surprise musical guest, a time-honored Sweet Sixteen tradition. Except, of course, the act was the birthday girl herself (unsurprisingly, this has happened on the show itself, as well, albeit with considerably less talented subjects).

Charli launched into her ubiquitous “Boom Clap” as a kickoff to her raucous, but quick, three song-set. By 10:25 p.m. it was over, instigating a mass exodus toward the door for a very curfew-friendly exit.

“Goodnight, Angels,” the singer cried as she left the stage. Goodnight, Charli.