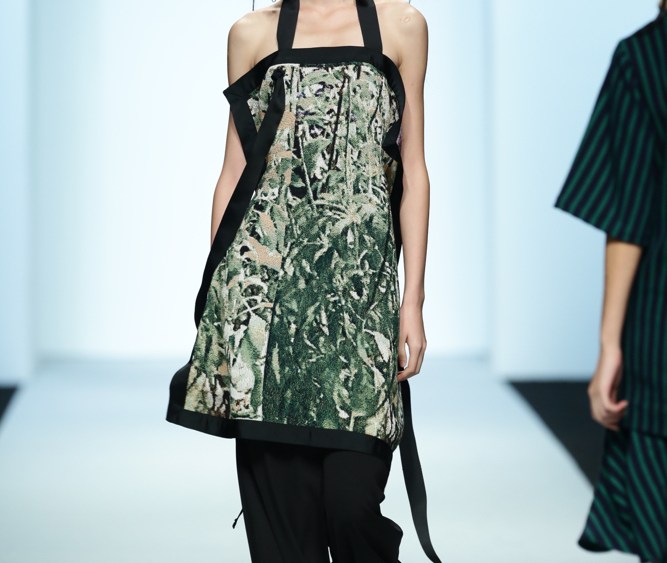 Business was front of mind for many involved in the spring 2016 edition of Shanghai Fashion Week, a dramatic turnaround from only a few seasons ago.

Until last year, a common criticism of fashion weeks in China, including in Shanghai, was that the shows, which often featured talented young Chinese designers, were in effect an expensive marketing exercise with no opportunity for commerce.

This was in part because Shanghai and Chinese design weren’t really on the radar of the fashion world at large, but also because of a local retail environment dominated by malls constructed by real estate developers keen primarily on housing big-name brands and making their money by charging minimal rents, but taking a cut of purchases.

In such an environment, it was exceedingly difficult for independent designers to make their mark. However, over the past five years in first-tier cities such as Beijing and Shanghai, and within the last two years in second- and third-tier cities, a culture of multibrand retailers and their accompanying buyers has quickly emerged, bringing niche Chinese and international brands to consumers in their hometowns.

Though Shanghai Fashion Week has always seemed to struggle with its identity — experimenting with the balance of big international names, more commercial brands and quality independent designers — it seems these issues are beginning to resolve themselves. The event is becoming a forum for international buyers to discover young Chinese designers and global brands to access a fast-growing contingent of Chinese multistore buyers by participating in concurrently running showrooms and trade shows.

Half a dozen showrooms and trade shows ran in conjunction with the spring 2016 edition, which ran October 13 to 21, including The Hub, Chic Shanghai, Intertextile Shanghai, Mode Shanghai (managed by the Shanghai Fashion Week organizing committee), Showroom Shanghai, Alter Showroom and the On Time Show.

Mode Shanghai, which debuted during April’s Shanghai Fashion Week with around 200 brands, this time hosted 22 showrooms and 400 brands. A large percentage was from China, but brands from countries such as the U.K., Denmark, Spain and Korea were also represented.

This rapid growth in the showroom aspect of Shanghai Fashion Week has been driven by two factors, according to organizing committee vice secretary general Lu Xiaolei. “The first is that Chinese consumers are not satisfied with regular commercial brands or luxury brands anymore,” she said. “They have a trend to pursue and look for unique and special fashion products.”

“In addition, the retail fashion market is also changing with more attention on multibrand boutiques and independent designers from traditional department stores and shopping malls in China. We see more and more domestic and international buyers are becoming more enthusiastic about buying Chinese designs.”

Touring the showrooms, buyers from far-flung parts of China were an obvious presence — including one from Ningxia, China’s smallest and one of its most impoverished provinces, a demonstration of how deeply the trend for multibrand boutiques has penetrated the country.

International buyers from Opening Ceremony, H Lorenzo and Australia’s David Jones department store were all in attendance, as were high-profile local players such as Lane Crawford and Dong Liang, which exclusively stocks Chinese brands.

Lorenzo Hadar, of H Lorenzo, said the retailer would continue to work with Chinese brands he had discovered on previous trips, as well as pick up a small number of new brands he came across this year after visiting the Mode Shanghai showrooms.

“I’ve been coming here for the last four seasons and things have really changed,” he said. “It’s getting better, but they still need to shape up a little bit, they need to be a bit more focused on who they represent, because they are a little all over the place, but they are going in the right direction.”

“It was great to see so many showrooms taking place alongside the shows. On Time, Mode Shanghai and Showroom Shanghai are catering to both domestic and international buyers,” Xin said.

For a young designer, such as the aforementioned Xu Zhi, who showed his collection alongside many of the same people he studied fashion with in London, exhibiting his spring collection at Mode Shanghai was an opportunity to spread the word about his fledgling brand. “This is my first season in Shanghai — it feels like a homecoming,” he said. “I have met so many press and so many buyers, it’s been really, really great.”

Compared with this time last year, the presence of international brands on the official schedule was reduced. That said, the week opened with the highest-profile international show of the week, from Ports 1961, featuring turns from superstar models Kendall Jenner and Joan Smalls, and an after party with Paris Hilton serving as DJ.

Also on the Shanghai Fashion Week schedule was New York-based brand Carrie Hammer, who brought her “Role Models, Not Runway Models” show concept to China for the first time and had successful and inspirational women from Shanghai walking in custom-made dresses.

Off-schedule shows and events throughout the week included the launch of Gucci’s “No Longer/Not Yet” exhibition at Minsheng Art Museum, with both creative director Alessandro Michele and president and chief executive officer Marco Bizzarri in attendance.

The former praised the energy and growth of Shanghai as a fashion city, the perfect place to introduce the conceptual exhibit — preoccupied with the nature of the contemporary and modern, both in fashion and the world at large. “It’s a very powerful place, it’s full of energy. If you go out in the street, it’s crazy,” Michele said.

“It’s a big market, everybody knows it’s a big market. But I was not thinking about the marketplace. Now Chinese people are really ready to speak the fashion language,” he added.

Also showing off the schedule were Shanghai design stalwarts Helen Lee and Ji Cheng, the latter show coinciding with the close of Shanghai Fashion Week on Wednesday evening. Ji’s collection, her signature mix of custom eveningwear with a newly apparent sportswear element in her rtw line, was particularly notable for its location. Staged at the Yuz Museum, which currently houses the visiting “Rain Room” exhibition, the designer, models and fashion insiders spent the after show frolicking their way through the simulated environment.

As for the future, organizer Lu Xiaolei is aiming to build on the foundations of commerce put in place this year: developing the current model with a view to promoting the fashion ecosystem and concentrating people’s attention on Shanghai as China’s fashion capital. “We do not foresee or expect a sharp and thrilling development for our fashion week, but want to see its stability continue,” she said.