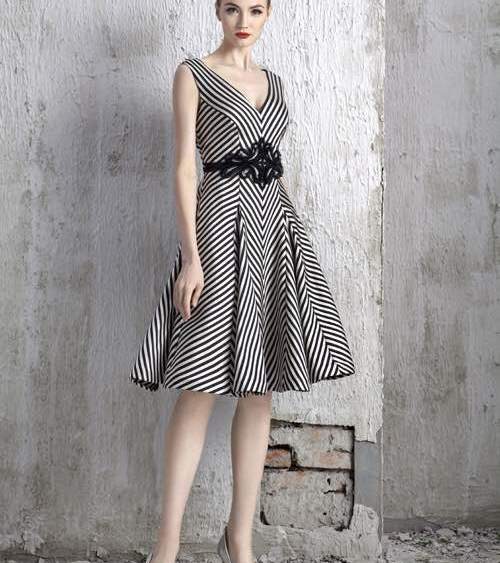 EASTERN TIME: “Now is the time of the Chinese,” said Grace Chen, describing the growing importance of her country’s fashion designers, both internationally and at home. Chen was showing her first ready-to-wear creations as well as her couture at the China in Paris showroom, which ended Oct. 6, alongside six other labels.

The initiative, a collaboration between Paris-based consultancy Fashion Intelligence and Chinese luxury brand consortium InLife, aims to help build the presence of Chinese brands on the worldwide stage.

The partners have several new international projects in the works, including an event next May during Asia Fashion Exchange in Singapore, as well as another, on the U.S. West Coast, in partnership with a major retailer, according to Fashion Intelligence cofounder and manager Martina Planty.

As to the Paris event, the organizers are moving more toward a contemporary and rtw offer.

“[Chinese] couture is now established,” Planty said. “Our aim now is to have the younger, contemporary labels.”

Planty said buyers who visited, keen to differentiate their offer, appreciated the fresh eye of the young Chinese designers as well as the broad range of price points — monochrome designs by Houang, who studied at the Chambre Syndicale in Paris and was presenting his first collection, started at 37 euros, or $41.50 at current exchange, wholesale for an ample cotton shirt dress.

Buyers also picked out cocktail dresses from Grace Chen’s collection, including a black-and-white striped number with dainty chiffon embroideries at the waist, and another in pale pink jacquard with a Peter Pan collar embroidered with beads, both priced 380 euros, or $426, wholesale.

She said she is planning on building her rtw internationally before launching it in China, where brands are expected to operate their own retail, making a launch prohibitive in the short term, despite what she sees as demand from her couture customer base, more educated about quality and less label-centric than in the past.

“For ready-to-wear, you need a certain number of stores,” Grace Chen said.

Internationally, she is targeting four or five accounts in the short term and foresees strong demand from Chinese expatriates and travelers.

SheMe marketing director Zoe Chen said the footwear brand had also garnered a lot of attention from buyers, who had been surprised by the comfort of the label’s elaborate sky-high designs compared with comparable luxury footwear labels.

SheMe already has five department-store boutiques in China, and is looking to build international presence for its elaborate creations.

“We want to develop the market in Europe and the Middle East,” she said, adding that Harvey Nichols Riyadh had been very interested in the brand’s personalization service, which can see designs adapted to a customers’ specifications and shipped within one month.

SheMe produces 5,000 pairs per year and registers annual revenues of 20 million yuan, or $3.1 million, with both figures expected to double in 2016 as a result of the expansion, Zoe Chen said.

Other highlights at the showroom included Kilin Chen’s HVL label, which used Japanese fabric made from pine needles as well as real gold for embroideries and prints, and Esmod-trained Zhang’s Ge Gieva collection, which offered a range of shapes and styles all done in a single graphic yet understated print.