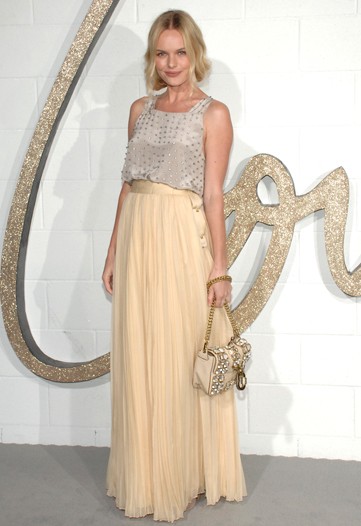 Kate Bosworth and Chloë Sevigny hosted a party to fete the opening of Chloé’s Los Angeles boutique Thursday night at the new Hollywood outpost of Milk Studios, drawing a slew of starlets including Camilla Belle, Leighton Meester, Ever Carradine, Emma Stone, Lake Bell and January Jones, among others.

“I’m a true fan,” said Bosworth, who brought her mom to the party. “I have been in love with this brand for many years. My favorite thing is the feminine touch with the edgy twist.” Bosworth styled her own outfit, a studded top with a diaphanous floor length skirt, noting, “That’s what Chloé is all about — individuality. You can take things from each collection and make it your own.”

Sevigny, who met Chloé creative director Hannah MacGibbon back when she was working for Phoebe Philo, said, “I am so glad Hannah is back. I think Chloé was missing a feminine touch, and with my body it’s hard to do the tomboy thing. I feel more comfortable dressing like a woman.”

Zoe Saldana lamented that she couldn’t stay later — she had a 3 a.m. call time —  but Leighton Meester was enjoying her first day off and had a reason to celebrate. “I signed my record deal today so I am really excited,” said the “Gossip Girl” star, who just wrapped a movie with Tina Fey and Steve Carrell (“Date Night”) and begins work on the horror film “The Roommate” next month. “I’m excited to be spending time in L.A. In New York you never get to wear anything backless or triangle-less,” she said, pointing to the cut-out on her dress.

The night before, Lisa Love hosted a party at the Melrose Place store, where the racks of clothes made Rose Byrne drool. “If I could afford to buy anything I wanted, I would only shop here,” she said.