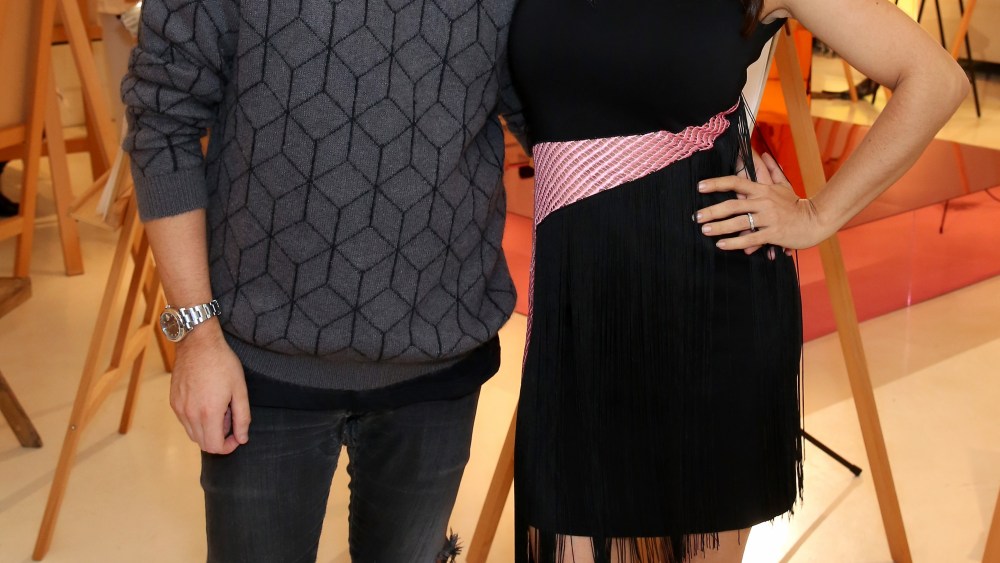 LIFE AND SOUL: Christopher Kane marked Frieze week with an invitation to friends to pick up their pencils and join him in a life drawing session at his store on Mount Street in London.

“I’ve always done life drawing classes, because I studied fine arts as a student, and it’s very close to my heart,” said Kane. “It doesn’t become anything but relaxing, and it’s a nice occasion to bring so many people together — journalists, artists, models.”

The designer, who was recently nominated for a British Fashion Award for women’s wear, joined guests including Salma Hayek and Daisy Lowe in a class taught by his former high school art teacher, Janey Broughnan. “She’s from Glasgow School of Art and has been teaching for 33 years. I love her and she’s a huge mentor for me and for Tammy,” he said, referring to his sister and the company’s deputy creative director.

A cluster of easels, canvases and an assortment of art supplies were assembled across the two floors of the store. Live nude models posed on platforms and partygoers sat and sketched.

Later that evening, GQ Style marked its 10-year anniversary with a heaving party that had Home House filled to capacity. Tempers were fraying in the queue to get inside, where the dance floor was thumping.

Patrick Grant was bopping in his E. Tautz wide-leg jeans. “Seriously, they’re our biggest seller. People come in all the time asking for them,” he said.

Agi & Sam designer Sam Cotton said he tends toward more aggressive physical pursuits. “I was the youngest person to do full-contact fighting in Britain,” he said. “You know the Ultimate Fighting Championship? It’s mixed martial arts in an octagonal cage. I did Brazilian jiu-jitsu.”

“I used to kill kittens. That’s pretty badass,” countered his design partner Agi Mdumulla. “No, I didn’t, not really.”

The evening wrapped with a dinner at the Rosewood Hotel to mark the launch of David Koma’s first handbag collection for Mugler. The event was cohosted by Sandrine Groslier, Virginie Courtin-Clarins and Koma.

“It’s my first accessory collection for Thierry Mugler, and it has a masculine edge. I wanted it to be very graphic and smart,” he said of the bags, with their geometric patterns and sharp edges. They’re made from bits of metal, suede, snakeskin and napa.

Koma’s not stopping at accessories. He said he’s hoping to work with the brand to get more involved in perfume and develop new fragrances for the house that’s known for best-sellers Angel and Alien.

He’s also not complaining about living his life between Paris and London, where he continues to show his signature line.

“I was doing three days here, three days there. But now it’s one week in each city. I get on the 5:45 a.m. train from London — and start my working day in Paris. It’s dark when you leave London and light when you arrive in Paris, so it’s just like waking up there,” he said.

During the evening, Swiss watch brand IWC hosted a reception in support of the British Film Institute at the Langham Hotel’s Palm Court. Guests, including the actress Zawe Ashton, watched a screening of “The Lobster,” a quirky British film starring Rachel Weisz and Colin Farrell. In the film single people are required, by law, to go to The Hotel, where they must find a romantic partner in 45 days. If that doesn’t happen, they are transformed into an animal of their choosing, and sent off into the woods. “I’d be a jelly fish,” said Ashton, “Then I could have tentacles that reach everywhere.”