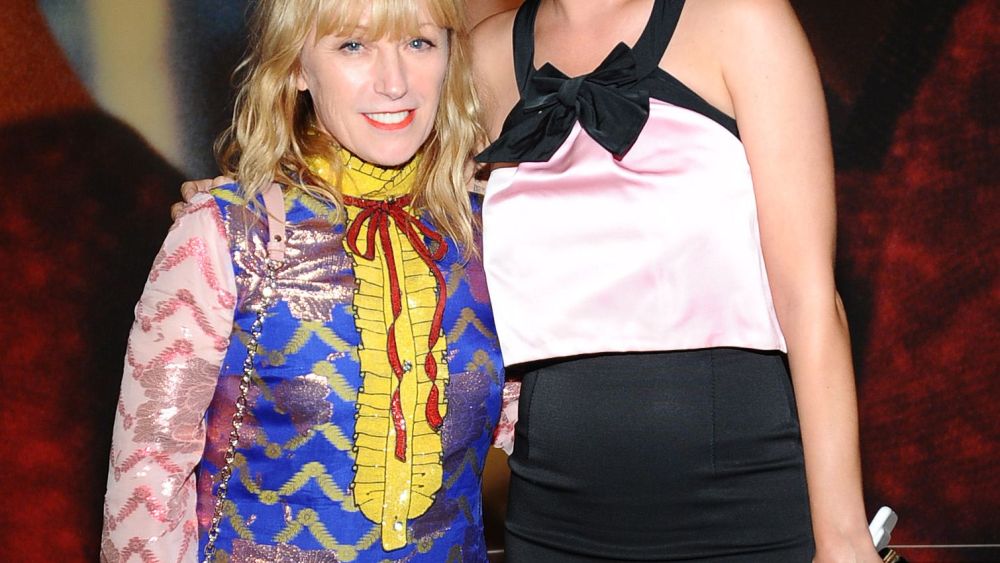 Clad in a colorful Gucci dress with a Dior shoe on one foot and a brace on the other, conceptual photographer Cindy Sherman was the belle of Wednesday’s private dinner and preview of The Broad museum’s first special exhibition “Cindy Sherman: Imitation of Life.”

Clutching a crutch with one hand, Sherman warmly hugged members of the art world elite who passed through the exhibit — her first major museum show in Los Angeles since 1997 — and even took selfies with one appreciative fan: Katy Perry, whose boyfriend Orlando Bloom arrived earlier.
Guests including The Broad founders Eli and Edythe Broad, Jamie Lee Curtis and her husband Christopher Guest, Los Angeles County Museum of Art director Michael Govan and artists Barbara Kruger and Ed Ruscha mingled and chatted, then feasted on a multi-course dinner at Broad restaurant Otium.

“This is so beautiful … When did you start experimenting with taking photos of yourself?” Perry, in a sleek Oscar de la Renta sheath, asked Sherman in front of a full-wall mural of the artist.

The exhibit traces Sherman’s 40-year history of stereotype-smashing self-portraits exploring a range of personas, from model and Hollywood actress to Renaissance muse. She shoots alone in her studio, acting as her own makeup artist, hairstylist, photographer and director.

Perry said her management team bought her a Cindy Sherman photo as a Christmas gift last year. “She’s a great developer of characters. I develop a lot of characters. She’s very inspirational in that way,” Perry said. “I just love her as an incredibly strong female in modern art who has a very distinct look about her, and she does it all herself.”

Curtis smiled, standing next to an untitled 1983 print of Sherman wearing a ragged wig covering her entire face, except for one intense, angry eye. The actress pointed out that she and Guest bought an edition of the photo — their first piece of art bought together as a couple — in New York City in 1984 when they first married. “I personally feel that she’s on par with the greatest actresses ever,” said Curtis. “I’m very happy to see this up.”