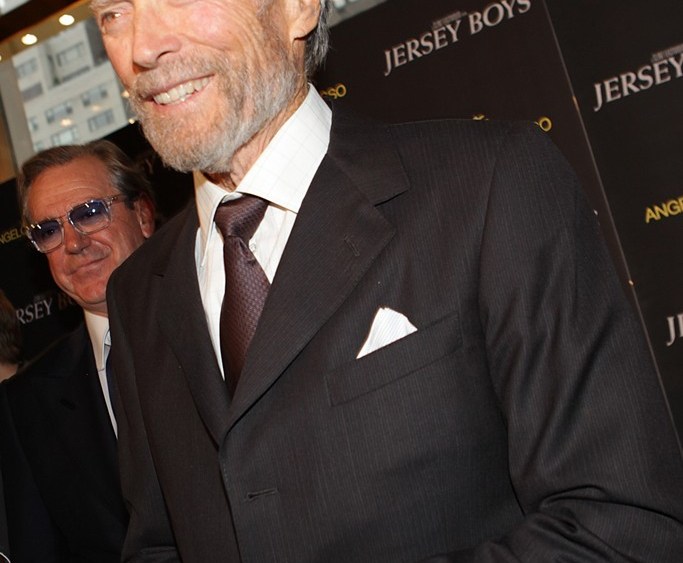 On Monday night, Clint Eastwood was at a dinner before a screening of his new movie, “Jersey Boys,” the hit Broadway jukebox musical that traces the rise and fall of the Sixties pop group The Four Seasons. The movie is a bit of a departure for Eastwood, who as a director favors heavy dramas like “Million Dollar Baby” and “Mystic River,” a movie that deals with sexual abuse and murder, not exactly Broadway material.

So what does a musical look like in the hands of Dirty Harry?

“It isn’t really a musical. You could do the story without any of it,” Eastwood said. “Music is what they did,” but the band’s origin story was compelling enough to draw the typically choosy filmmaker into new territory. The last time he directed a film with music as its subject was in 1988 with “Bird,” and with Charlie Parker’s heroin addiction that was some heavy going as well.

“They asked me to do [the movie] before I knew anything about it. And I said, ‘Well, let me look at it and see,’” he said. “I went and saw three different versions, in Nevada, San Francisco and here, on Broadway, and I kind of got what I thought made it tick — at least in my mind, anyways — and so I settled down to do it.”

Broadway, curious about Eastwood’s musical chops, turned out to check out the goods — among the guests was new Tony Award winner Lena Hall, Alan Cumming, Bebe Neuwirth, Tommy Tune, Jefferson Mays, Brian d’Arcy James, “Rocky” actor Andrew Karl and Elaine May, who came with partner Stanley Donen, the director of such celebrated screen musicals as “Singin’ in the Rain.” The screening was held at the Angelo Galasso House at The Plaza in New York, which seemed like a missed opportunity — was the Four Seasons booked? Turns out designer Angelo Galasso had grown up watching Eastwood’s movies at his local cinema in Italy.

John Lloyd Young, who reprises his role as Frankie Valli in the film, said Eastwood is a natural at musicals.

“Clint’s overriding philosophy is, ‘Don’t overthink anything. Go with your first best idea and that’s usually the right one,’” he said.

Another star was making her way down the carpet toward Eastwood when Young backed up at a precarious moment. “Sorry, sorry!” he said, turning around to face the person he’d just stepped on: Barbara Walters. “I had no idea it was you! I would never have dared to step on you,” Young said, acting more like he was actually facing Dirty Harry and not the retired TV personality. Walters did not pull a “Do I feel lucky?” moment and instead graciously greeted the young actor.

Click Here to See Images of Fashion From ‘Jersey Boys’ >>