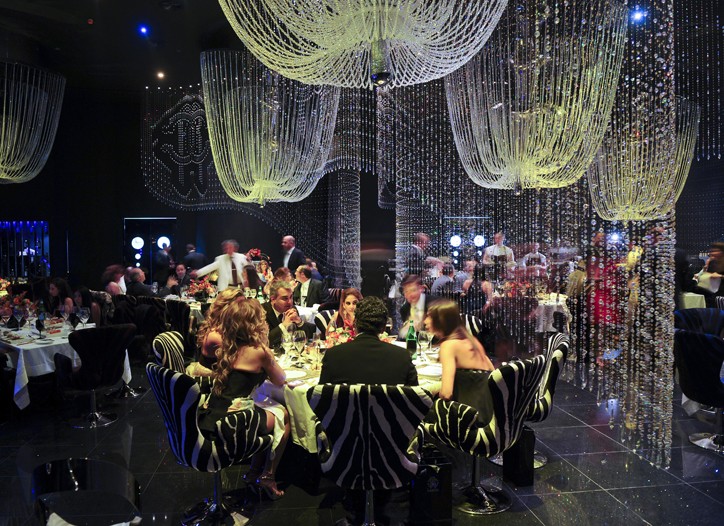 DUBAI — Roberto Cavalli was dancing in the desert last weekend, as he launched his namesake club in Dubai on Thursday night with a lavish private party for more than 400 friends.

Billed the first designer club in the Middle East, Cavalli hopes to tap further into a market that has been lucrative for his products.

“This is the perfect place to express the futuristic concept of the Cavalli Club,” he said. “Dubai is experimentation, research of the new, and so is my fashion.”

He added his business has grown considerably in the region. “I have many stores in this area and loyal customers. Dubai is one of the most important selling places in the world for Cavalli fashion. It’s the future of the luxury business.”

The Cavalli Club, with its opulent Italian restaurant, sushi bar and nightclub cost nearly $30 million. Connected to the Fairmont Hotel in the heart of the city, it features floors made of black quartz, 20-foot-high ceilings dripping with Swarovski crystals and furnishings in his trademark animal prints.

The club also includes a boutique showcasing jewelry, watches and a selection of the designer’s favorite gourmet Italian foods, and a range of Cavalli Club-branded home accessories, from lamps and cutlery to china and glassware.

The much-talked-about club had an original launch date last fall. But Cavalli said the blame for the delay lay squarely with his meticulous involvement in planning every detail. “Beautiful things are expensive and take time to create,” he remarked.

He said there was no hesitation in launching during this economic slowdown, which has hit the usually prosperous emirate of Dubai hard.

“This project started more than a year ago and the budget had been already allocated before this credit crunch,” he said. “And we want to give a sign of optimism for the future.”

Cavalli added that he hopes to open the next Cavalli Club in Milan next month.