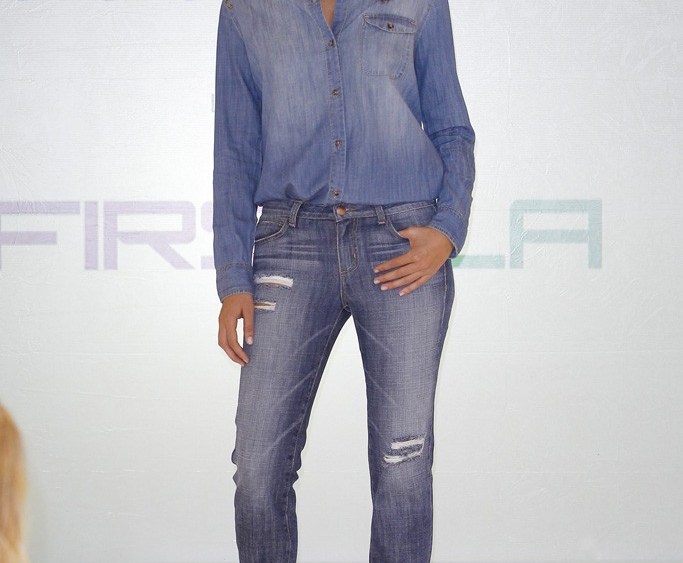 LOS ANGELES — Like the spring colors at the Los Angeles contemporary fashion market, a four-day event that ended Oct. 18, retail buyers were cheerful about the prospects for the upcoming season.

Angela Myers, the Los Angeles buyer for franchise boutique concept Apricot Lane, said her buying has increased 40 percent since last year. Krystle Kemp, buyer for Richmond-based Need Supply Co., also expects growth for the retailer this spring, while Jasmine Afcharieh, owner of the Boulmiche store in Beverly Hills, said her budget for spring is about the same as last year. “Hopefully, [business] will get better,” said Afcharieh, sounding optimistic.

In terms of trends, buyers still gravitated to color, especially mint green, yellow, peach and other hues from the sherbet rainbow. Koger said spring pastels were strong last spring and summer and are still selling well. Kemp said the muted colors translate to shoes, denim and even metallics. Shine created by the use of Lurex and sequins was also popular, along with transparency via chiffon and mesh. Leather remained a staple.

Loose-fitting tops and pleather jackets are top-selling items in Afcharieh’s boutique, and she has stocked up on more for spring. Koger will focus on the already popular novelty and conversational prints, like animals and food. For Myers, dresses with lace, sequins and peplums dominate.

“There were dark, men’s wear elements in the fall, so the spring has feminine silhouettes with a very flowy, organic, cool feel,” said Kemp.

Trade show exhibitors and showroom staff reported that traffic was a mixed bag at the contemporary market, which encompassed Designers & Agents, Focus, Select, Coeur and the showrooms in the New Mart, Cooper Design Space, Gerry Building and California Market Center. While some said business was slow throughout the event, others said brisk days were offset by mediocre ones. All agreed that the most recent trade expo, which is usually the strongest of the five annual fairs for the region, represented a marked improvement from the Great Recession but still hadn’t caught up to the preceding boom years.

Pricing, while still important, isn’t as pressing an issue as in seasons past. Liza Stewart, who represents labels including Yoana Baraschi and Only Hearts at her namesake showroom, said the sweet spot for retail prices is under $100 for knit tops, below $150 for silk blouses and under $200 for casual dresses.

“They’re not asking [about prices] as much,” she said in regards to retail buyers. “The manufacturers are doing a better job in their pricing and how to be competitive.”

Myers, who spends five days a week at the San Pedro street wholesalers, said store owners are realizing it is easier to get weekly shipments instead of projecting trends four months in advance.

In a reflection of improving business conditions, a number of new fashion labels from Los Angeles made their debuts for spring.

Counting Andrea Bernholtz, the former president of Rock & Republic, as a consultant, De Chemin premiered 38 styles of novelty jeans, including a camouflage-print skinny sailor style and ankle-length jeans featuring curved yokes in the front and back. Launching as an update of French Seventies brand Chemin de Fer, De Chemin wholesales from $79 to $120.

Seinne also relied on pedigree and experience, in particular from veterans of Clu, to update basics. Backed by Seung B. Lee, Clu’s former co-founder, and Seoni Kim, its former designer, Seinne gave a sporty twist to shirttail hem skirts, tank dresses and other easy pieces by mixing drapey fabrics like silk chiffon, cotton jersey and washed rayon. Wholesaling from $30 to $108, the line has already been picked up by leading specialty store Satine.

Karolyn Pho channeled the Sixties with her line of cream body-conscious midcalf-length dresses and navy silk gowns enhanced with high-low hems and pleating detail on the hips; wholesale prices are $30 to $265.

Kelly Wearstler fared well among buyers with a boxy fake leather top wholesaling for less than $100. New York’s 3×1 attracted attention with its colorblocking of pastel hues such as mint green and pale pink on a basic palette of white and black for $107 superstretch jeans.

Szen from Italy appealed to shoppers who want novelty and value with reversible sweaters that were muted green on one side and teal with printed blue herringbone elbow patches on the other. New York-based Saunder offered a $180 lime green jacquard dress spliced by mesh panels that ran horizontally across the chest and waist. Pia Pauro from India proved that buyers are willing to pay for something special with the demand of its most expensive item, a $400 strapless dress that glistened with hand-sewn sequins arranged into a tableau of orange, yellow, pink and blue ferns.