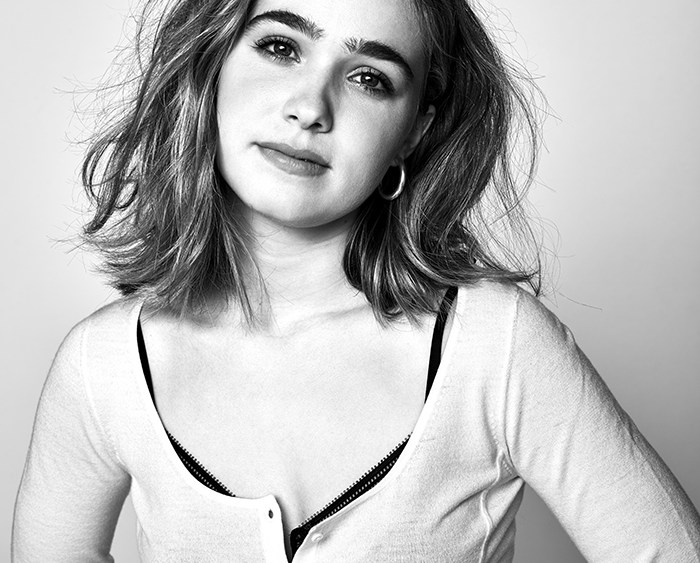 Haley Lu Richardson first learned of her future costar, rising multihyphenate Hailee Steinfeld, like much of the world did: when the Coen brothers’ “True Grit” was released in 2010. Yet the casting stuck out to Richardson not only because Steinfeld earned an Oscar nomination, or because they share the same name; she, too, had auditioned for the part, all the way from her childhood home in Arizona.

Several auditions and a move to L.A. later, the 21-year-old Richardson is capping off a year of breakouts in critical darlings celebrating the awkwardness that is coming-of-age. Earlier this year it was gymnastics comedy “The Bronze,” and she now delves further with ‘The Edge of Seventeen,’ where she plays Steinfeld’s best friend as they find their way through high school.

Up next, she’ll star in M. Night Shyamalan drama “Split” with James McAvoy and Anya Taylor-Joy; she chatted about her background in dance and what her parents “fangirl” over.

WWD: You grew up competitively dancing; when did you realize you wanted to be an actor?

Haley Lu Richardson: I just celebrated my five-year mark [in L.A.] a couple of months ago. I really had no clue what [being an actor] meant — I hadn’t really acted much in Arizona. I did competitive dance really seriously for nine years in Arizona, and I was always entertaining — I was always sort of a ham as a kid, just always wanting to entertain and to get people to laugh.

When I was eight until I was 17, my life was dance — sorry this is a complicated answer, I still haven’t figured out the simple answer to this question. But when I was 16, my friends and I were all starting to think about what we were going to do with our lives, and I started picturing myself majoring in dance at college traveling around with a contemporary dance company, and it didn’t excite me as I thought it would all those years. I was just thinking about the things that I loved most about dance, which was entertaining and telling a story, and that’s when I kind of opened my eyes again to acting.

WWD: Has the acting career intersected with your dance background at all?

H.L.R.: Oh my God, like, I hope it does! It doesn’t come up as much as I want now, but my biggest dream is to be able to be in a movie or some great TV show where I get to dance, and it’s about a contemporary dancer of some kind. I love how much dance is sneaking its way back into society. Dance is so prominent, now more than it’s been before, but I still feel like there’s this void that needs to be filled that tells the story of a contemporary dancer who is in a company — I don’t know, just that’s my dream to do that.

WWD: What stood out to you about the “Edge of Seventeen” script?

H.L.R.: It was one of those scripts where you don’t put it down and go make a sandwich and check Instagram a bunch while you’re reading it — I was in it the whole time and read it straight through and laughed and cried along with the characters. I think there were no cons — it was all just pros leading me to do the movie. I started reading the script and I kind of saw what was going to happen: Krista, my character, is going to end up being a b—h and ruining the friendship and the boyfriend is going to be full of himself and all these things. There were all these immediate stereotypes that went into my head, and then by the end of the story, all of the characters had kind of proved otherwise. And I just thought it was really real and really cool because what you kind of expect, isn’t — that’s the best kind of script to read.

WWD: How did you first meet your now costar, Hailee Steinfeld?

H.L.R.: I met her at Sundance Film Festival a couple of years ago — I had loved her in “True Grit,” and I actually auditioned for “True Grit” from a self tape in Arizona when I was 15. That was one of the first things I ever auditioned for, so when it came out that this other Hailee booked it, my parents always had a place in our minds for “True Grit” and Hailee, the two Haleys. I finally met her and my mom and dad were like fangirl-ing over her because of that story.