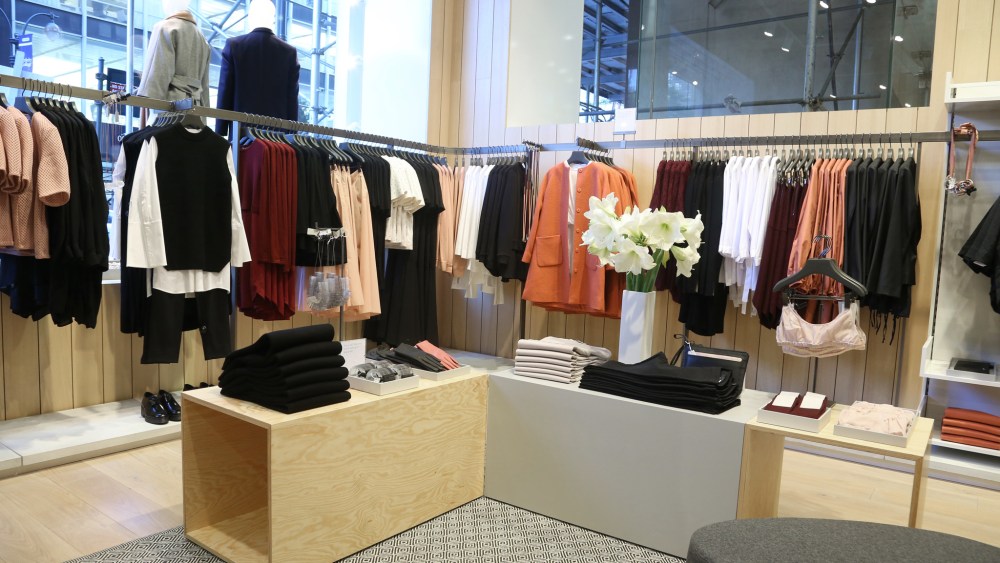 NEW YORK – Cos today is opening its second Manhattan unit, a 3,982-square-foot store at 505 Fifth Avenue and 42nd Street here.

H&M’s sister brand is in the midst of its biggest expansion to date with previously announced plans to open 27 units worldwide by the end of this year. Cos on Thursday revealed it has signed two new leases, at the World Trade Center here and in Atlanta. The retailer now operates 133 stores in 27 countries.

The Fifth Avenue store is Cos’ fourth in the U.S., but the brand is quickly racking up units. A second California location was unveiled Wednesday at South Coast Plaza in Costa Mesa. Next week, Cos will open a store in Boston, followed by locations at The Beverly Center in Los Angeles and Houston’s River Oaks District.

The retailer arrived in the U.S. in 2014 with stores on North Beverly Drive in Los Angeles and Spring Street in SoHo. An e-commerce site launched last year.

Cos, which is influenced by architecture and contemporary art, is also growing overseas. A second Australia store will bow in Sydney at the end of November, joining an existing Melbourne store. Cos will unveil its first freestanding store in Seoul, a four-level flagship, which will be the brand’s fourth sales point in Korea. Milan’s second Cos will bow at the end of November. The brand will enter two markets before year’s end, Budapest in Hungary and Luxembourg. Cos recently opened its first Canadian stores, in Toronto and Montreal.

“We’re pleased with the response to Cos in the U.S.,” a spokesman said. “We’re having strong organic growth.”

The Fifth Avenue store shares the building with & Other Stories, another H&M brand, which on Oct. 30 will unveil a 9,700-square-foot flagship. H&M previously occupied the entire space.

The Fifth Avenue store is bright and airy with an internal façade covered in light wood and white modular shelving. Cos is priced above H&M, with dresses retailing for $89 to $139 and outerwear, $250 to $450. The white shirt, which the company considers an iconic garment, is reinvented every season. For fall, there’s a kimono style, $89.

Expedition, the name of the fall collection, features sea greens and glacial whites. Shapes are voluminous, such as an ice blue down coat with drawstring hem, $350, and a navy nylon balloon dress with a drawstring hem, $175. Handbags range from $60 to $180.

The spring collection, which was previewed at the store, features a denim dress with attached apron, a dress with a dramatic wide lattice and blouses with origami folds.

For men, blazers are unlined. Welded seams are a design element of a men’s car coat. Men’s accounts for 20 percent of Cos’ total business.

To celebrate the new opening, Cos produced a booklet with images of products shot in stark settings along with the musings of six New Yorkers on their favorite city retreats. Mac Carbonell, founder of Verdant Gardens, mentioned Chelsea’s art galleries, while Pamela Yung, chef and cofounder of Semilla, cited WNYC Transmitter Park in Brooklyn.

Cos’ interest in the art world has led to a partnership with the Judd Foundation; the brand will sponsor an exhibition of Donald Judd prints at the organization’s SoHo space. Cos is in its third year of sponsoring special events at the Serpentine Gallery in London.