The world doesn’t need another celebrity perfume line, but how about one from a magazine?

For Cosmopolitan, part of Hearst Magazines, expanding its branded product was not taken up lightly, but it landed on fragrance for its foray into the beauty category. Hearst executives started discussing a partnership with Luxe Brands, the company behind Ariana Grande and Justin Bieber’s fragrance lines, over a year ago and the result is a line of four scents set to roll out with Ulta in all doors, exclusively through the end of the year. This is the first time Luxe has partnered with a magazine.

Cosmo will go full out with advertising in print and online for Eau de Juice, so named because “juice” is slang for perfume in the industry, and Ashley Benson of “Pretty Little Liars” is the main spokeswoman, a move sure to get plenty of younger women to try a bottle or two. But the name of the magazine is actually nowhere to be found on the bottle. It only appears in small white type on the bottom of the retail packaging saying that Eau de Juice is “served by Cosmopolitan.”

Giving the perfumes (packaged to look like slightly crumpled juice boxes and set to be displayed at 925 Ulta stores in stand-alone cases that resemble retro refrigerators) an identity largely separate from Cosmo is intended to give it a chance to live on its own. Noreen Dodge of Luxe Brands called the perfumes “a concept.” Steve Ross, Hearst’s global chief licensing officer and head of brand development, called the perfume a “diffusion brand” that used the magazine’s knowledge of its audience and its editorial leaders, like editor in chief Jessica Pels, to build it out.

“If you look at the bottles, for which we have a design patent pending, and aesthetics of the overall campaign, you can really see this brand come to life in a cheeky and whimsical way,” Ross said. “That was intentional and we really leaned-in to our brand differentiator to find our own niche in a highly competitive fragrance market.” 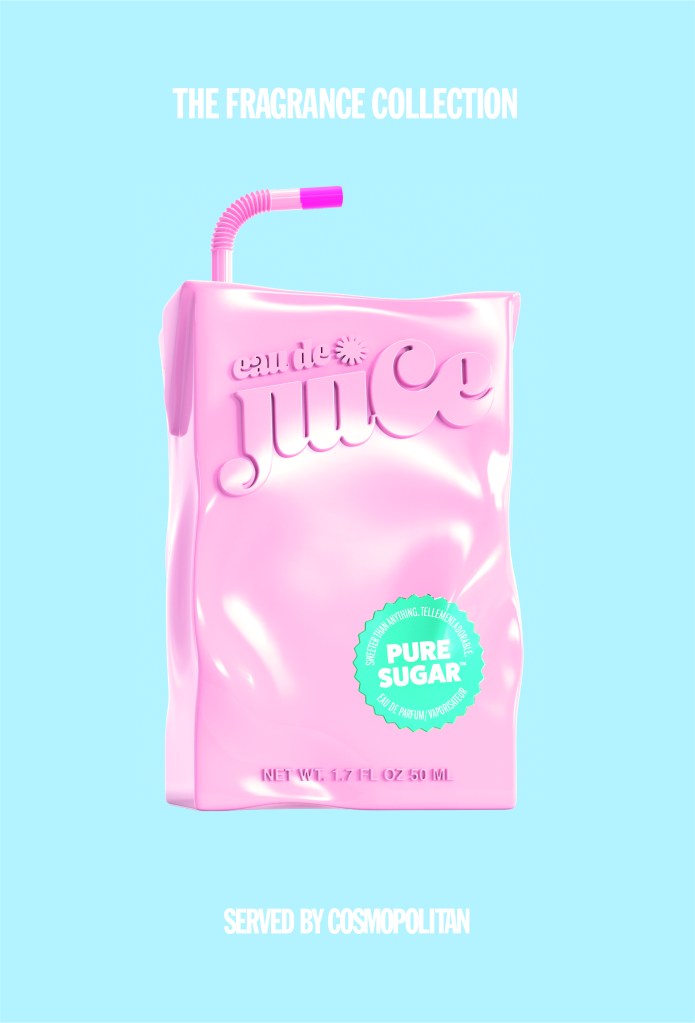 Even with that competition, and the fact that a lot of magazines have unsuccessfully launched a range of sometimes tacky branded products over the years, Ross is confident that the research and development of Eau de Juice will make it a success story.

“We know that roughly one-third of all beauty spending in this country is done by Cosmo readers, so we’re betting fragrance will be a relevant category that will really resonate with them — not just here in the U.S. but in a multitude of key international territories,” Ross added.

So how do the four fragrances smell? While not developed for an extremely sophisticated nose and retailing at a mid-low price point of $55, they’re not too bad. There’s a sweet one and a musky one, a light one and a floral one. But the packaging is the most striking part of the product.

Dodge said the bottles and the cases they’ll be displayed in are “very Instagrammable, very eye catching.”

“We love the idea of if it’s not on Insta did it even happen,” Dodge said. “Especially when you’re talking about this demographic. We wanted to make sure when we took that sensibility into the design of this brand. We went through a lot of rounds of design.”

As for Pels, who said she was involved with “every element of this line,” she said the decision to get into beauty with fragrance had a lot to do with her idea of the Cosmo reader and the fact that so many of them already spend in the beauty category.

“Fragrance is the busy girl’s secret weapon — you spritz some on your literal way out the door and you feel magically more pulled together,” Pels said. “Plus you create a sense of intrigue whenever someone smells it — ‘Ooo, what is that?’ It brings people closer to you.”

With the relatively limited branding of Cosmo’s name on the product, it seems like a subtle halo effect is anticipated. Pels said the fragrance is “an invitation to our world,” not just to read the magazine.