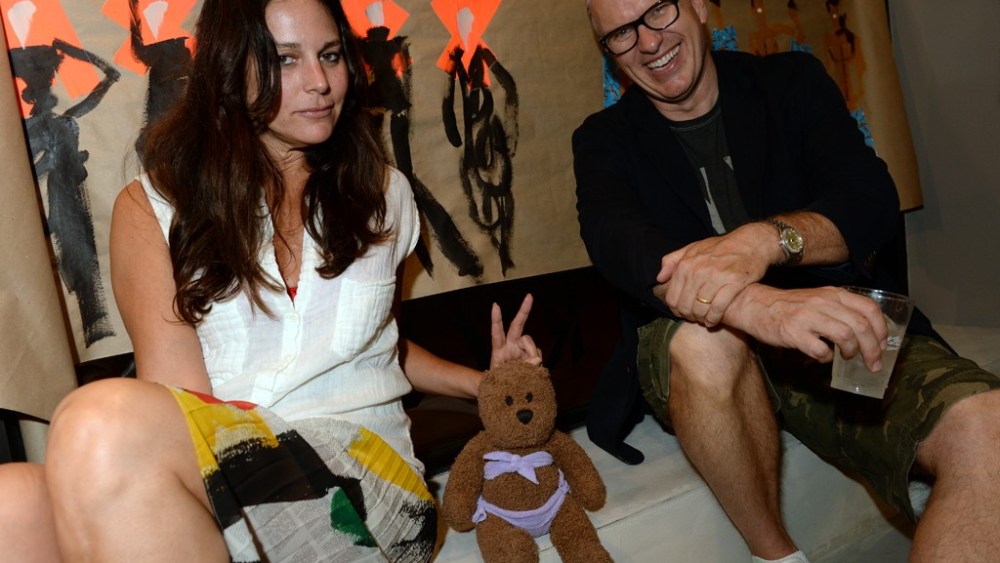 Donald Robertson, or “Drawbertson” as he’s better known in fashion circles, was the man of the hour on Tuesday night at Curve’s Bond Street boutique in Manhattan’s NoHo. The multimedia artist — who also heads creative development at Bobbi Brown — was there to mark the opening of the retailer’s new subterranean gallery space, which he had filled wall-to-wall with his kitschy illustrations of fashion personalities. Carine Roitfeld, a frequent collaborator of Robertson’s — he does all the illustrations for CR Fashion Book — was also billed as a host of the event, though she was a no-show (“she’s still on set,” a flack was heard saying).

Nevena Borissova circulated the room with her husband, Dany, and son Dorian. “Basically, I thought that we were gonna do men’s wear downstairs — we got all the merchandise — and three weeks later, I was so over it,” she said, through a thick Bulgarian accent. “So we decided to build a gallery instead. We’re not taking ourselves super, uber-seriously. We want it to be based around fashion and to feature cool people that maybe aren’t shown in galleries.”

Robertson — whose Instagram account has a cultlike following — is rarely profiled without mention of his other job as a “suburban dad” (he has a wife and five children with whom he lives in New Jersey). “Nobody else [at home] knows [about my job],” he said. “It’s like ‘Bewitched’ — I’m Darrin Stephens. Literally, I’m sitting at Little League games and I’m getting e-mails from Japanese Harper’s Bazaar, like, ‘Where is my art?’” His illustrations at Curve, priced at $2,800 a pop, were flying off the walls thanks to a partnership with Trendabl — an iPhone app that allowed users to purchase a chosen artwork straight off the wall with a click of their camera.

Carmen Carrera, clad in a slinky Jonathan Simkhai number, spoke excitedly about “Girls Like Us,” her upcoming VH1 documentary series produced by Tyra Banks, which will follow the lives of five transgender women. “I’m the star — I’m the advice-giver, the diffuser,” she said. “It lets people into my real life. Me and my husband are raising two kids, so it will show me at the PTA meetings, the soccer practices and stuff…the real lives of women like me.”