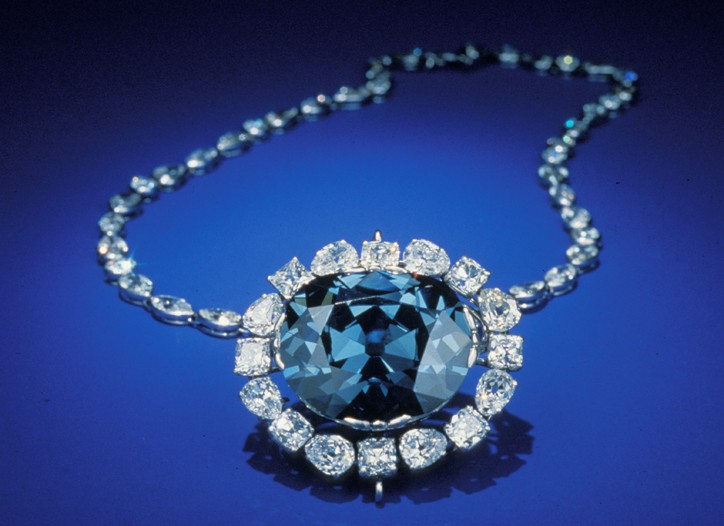 Perhaps Harry Winston has what it takes to break the curse.

Jeweler Harry Winston donated the Hope Diamond to the Smithsonian Institution 50 years ago and now the company he founded is resetting the stone that is supposedly cursed, but marvelous nonetheless.

At 45.52 carats, the legendary blue modified-cushion-cut diamond is the subject of a new documentary on the Smithsonian Channel to air next year. In commemoration of the anniversary of Harry Winston’s gift to the museum, the diamond, which has passed though the hands of royals and socialites, is being taken out of its most recent mounting, which was designed by Cartier in 1911.

Sandrine de Laage, Winston’s vice president of design, headed up the design process, in which three mountings were created. The final setting will be selected by popular vote, which takes place at smithsonianchannel.com/hope, starting today.

The Renewed Hope design is a cascading necklace with round, emerald and other fancy-cut diamonds. The Journey of Hope features swag like design with white diamonds and the Hope set obliquely at the nape of the neck. Embracing Hope is made from two elegant rows of emerald-cut diamonds that curve at the center and suspend the diamond. De Laage said the Hope, which is property of the Smithsonian, has remained at the museum during the process. The Smithsonian procured Winston with a resin replica of exact proportions to help make the new mountings.

The voting will be open until Sept. 7 and the winning design will be revealed at a press conference in Washington later this month. The actual piece is expected to be unveiled in March 2010.

“We went through very exciting moments when we knew we were going to do this,” said de Laage. “It’s a huge privilege.”

De Laage and her team played on the word “hope” to come to the final submissions.

“We started brainstorming with words,” said de Laage. “What hope means to us and how we wanted to translate this into a new designs…it’s optimism, with the notion of sharing, gathering and going forward.”

The diamond was acquired in 1653 by gem merchant Jean-Baptiste Tavernier in India, who subsequently sold it in 1668 to Louis XIV, who dubbed it the French Blue. It was passed down to Louis XV and was stolen along with the French Crown Jewels during the French Revolution under the reign of Louis XVI. The diamond eventually landed in the hands of London banking heir Henry Philip Hope in 1839, for whom it is now named. Cartier acquired the Hope in 1910, when newspaper articles began spreading about its bad luck, as several of its owners died horrible deaths. The McLean family of Washington, D.C., acquired the diamond in 1911 and Harry Winston purchased it in 1947 for $177,000.

Thomas J. O’Neill, chief executive officer of Harry Winston, said, “For us it represents the pure beauty of a beautiful, rare diamond. It’ll be interesting to see what the viewers decide.”