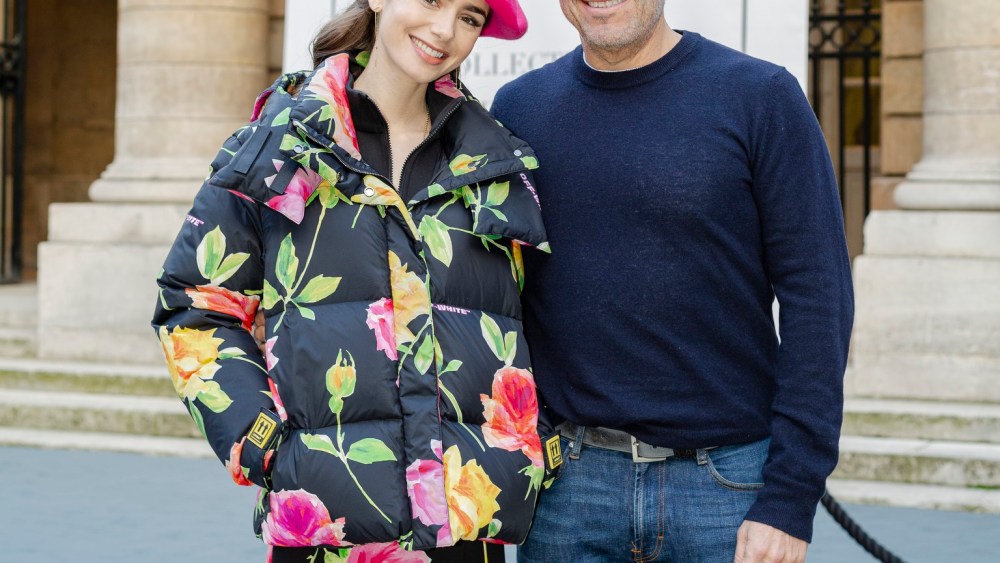 Among clichés about Paris: Fashion is such an entrenched part of daily life that taxi drivers in the French capital can talk authoritatively about collections and designers during fashion weeks.

Darren Star discovered a new one: that French extras on film sets know precisely, almost instinctively, how to behave at a fashion show.

That was the case last week when 250 extras assembled for one of the finale scenes for season one of “Emily in Paris,” the television series the “Sex and the City” and “Beverly Hills, 90210” creator has been filming in the French capital, and environs, for the last four months. Shooting wraps up this week, and the 10 episodes are slated to air next summer on the Paramount Network.

“We’re really getting the character and the texture of the city — and it informs everything we do,” says Star, inviting WWD to attend a sprawling shoot in the courtyard of La Monnaie de Paris that involved a garbage truck, a guerrilla fashion show of outlandish neon gowns, and a roped-off red carpet swamped by a noisy crowd.

Star describes the series as a romantic comedy or “dramedy” centered on a “fish-out-of-water” American in Paris, portrayed by Lily Collins, on this day dressed in a floral-print puffer jacket, matching short skirt and bright pink beret.

The 30-year-old actress appears in almost every scene as Emily, sharing her star billing with a city that Star has swooned over since he was 19, and one he found to be more ravishing and picturesque than ever.

“We’ve become very inward-looking as a country, and I think it’s good to do a show that celebrates another culture,” Star says, seated on a director’s chair tucked in a chilly hallway steps away from the main action. “Anywhere you put the camera, this city looks gorgeous and surreally beautiful. That’s another cliché of Paris.”

Beyond the romanticism of the historic city, Star wishes to convey its elegant, unrushed way of life. “There’s still a sense of graciousness and manners, the way people interact with each other, the politeness and respect for one other, which I feel is really missing at home,” he enthuses. “It’s definitely a more mannered society. It still exists!”

Star brought his crew and cast to the gilded Opéra Garnier, the Pont Alexandre III, Le Grand Véfour restaurant, Luxembourg Gardens and the Musée des Arts Forains dedicated to funfair artifacts. “Paris is definitely a character in the story the way New York was in ‘Sex and the City,'” he says. “I revel in the clichés. I love it all.”

“She’s the youngest character I’ve written for since ‘Melrose Place,'” he says, name-dropping another of his zeitgeist-defining shows. “You’ve got to come to Paris as a young person to have a certain sense of wonder.”

Collins portrays a budding professional parachuted in from Chicago to implement social media at a French luxury marketing agency, setting the stage for drama and culture clashes — not to mention references to fashion and perfume brands; some real, some fictional.

In an interview, Collins described her character as a “go-getter, determined, optimistic” and perhaps “too happy and slightly annoying. She just has that American sense of can-do that clashes with some of the people she encounters. That can come across as foreign and annoying to some; for others, it’s endearing.

Emily’s boss at the fictional agency is portrayed by French actress Philippine Leroy-Beaulieu, who describes her character as “a little bit the villain” as Star’s “meta-vision” for the show explores the gulf between brash American enthusiasm and French formality and reserve.

“Darren is making as much fun of the Americans as he is the French. It’s a very tender way of looking at it. It’s affectionate cruelty,” she says, her mouth curling into a wry smile. “It’s more about bridging the cultures.”

And, she adds, “there are a lot of great punch lines.”

Star is careful not to reveal too much of the plot, but describes Collins’ character as a charming, yet tone-deaf American who “doesn’t speak French and doesn’t have any great love or affinity for Paris. And she’s not warmly embraced.”

Known more for dramatic roles in films such as “Love, Rosie,” “Mirror Mirror,” and “The Mortal Instruments: City of Bones,” Collins shows a new side of herself in “Emily in Paris,” Star enthuses.

“She’s smart, she’s funny, and she’s a terrific actress. She is such a romantic comedy star,” he says, marveling that she brought to mind a young Audrey Hepburn in many scenes. “I think people are going to fall in love with her.”

Collins is also a producer on the program, consulted on the wardrobe and brought a contagious, joyful energy to the set. “Her spirit never flags, and that trickles down to everyone on the set,” Star says.

The admiration is mutual. “I grew up loving every show he did,” Collins says about Star, whose latest TV creation is “Younger,” already on its sixth season.

“I love his perspective on female characters,” the actress adds. “He’s so hands-on with everything and is on the set every day, yet he is also so incredibly collaborative. He chimes in and is creatively inspiring all the time.”

Collins has become smitten with the French capital over the past few months. “It has been an utter joy to work here,” Collins says. “There’s so much culture, so much beautiful architecture and so many beautiful sights to see in Paris. The locations have been absolutely incredible.”

Fashion plays an important and colorful role in the show, and Star called on his “Sex and the City” collaborator Patricia Field, plus costume designer Marylin Fitoussi, to team up and shape the look of the show.

“There are a lot of hats. Way more hats than I ever expected,” Star says, shaking his head in mock disbelief.

He gingerly describes Emily’s style as “fun” and not exactly subtle. “She can pull off an Eiffel Tower print dress,” he deadpans. “Her style gets more sophisticated as the show continues, but it’s a series, so she’s always going to be an American.”

Collins describes Emily’s clothes as colorful and loud, telegraphing her personality: “She’s a ray of sunshine; there’s so much color and pattern.”

In her life as an actress, Collins is admired for her sleek-yet-feminine style on the red carpet. She is an ambassador for Lancôme, and a friend of jewelry house Cartier.

Star is also a fan of fashion, more as a spectator, and appreciates the bite-size theatrical spectacle of runway shows. He praised Thom Browne’s spring 2020 display and Chanel’s beach set for its spring 2019 collection.

And he clearly is hip to the tensions that are festering between the new and old guards as fashion enters the social media age. The fashion show scene in the finale episode recounts a showdown between an elderly French couturier and a brash American streetwear brand that results in a boisterous display of one-upmanship.

“Lily’s character comes from the generation of Instagram,” Star explains. “The democratization of taste becomes a subject in the show. Who are the gatekeepers of taste, and how it’s changing is something we talk about in the show.”

Yet Star sees the show mainly as a “love letter to Paris” that will surely inspire many young women to log onto Expedia.com and book flights. Or armchair travelers can simply relish the cinematic splendor.

“Television has become big — and I mean big in terms of scope. I want people to have an experience watching this series,” Star says. “I wanted to share my excitement about Paris in this series, and I think people will be able to leave their lives for a bit watching this show.”

Patricia Field on ‘Sex and the City’; ‘Younger’ and Her Career at 92Y With Fern Mallis