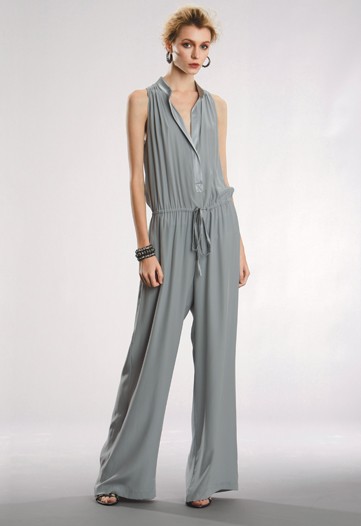 House of Deréon is ready for work.

The contemporary brand, which started in 2004 and is designed by Beyoncé and Tina Knowles, will launch a full collection of day dresses for spring selling. The brand is already known for its collection of contemporary social occasion dresses, which sell in eveningwear departments of such stores as Bloomingdale’s, Saks Fifth Avenue and Neiman Marcus. But it’s Tina Knowles’ hope House of Deréon can now dress its customers for their daytime activities.

“Beyoncé and I have had several occasions where we have meetings all day and don’t have time to run and change before dinner,” Knowles said. “This is a perfect collection to wear from the office to dinner because each piece can easily be dressed up or down.”

While the majority of the collection consists of dresses, there are a few dress and jacket ensembles, as well as jumpsuits. The line features washed rayon and sateen tank dresses, some with matching jackets; spandex knit styles with embroidery detailing at the waist; silk jumpsuits, and textured metallic cap-sleeve dresses. Knowles said for the first collection, the company was careful to design looks that weren’t over-the-top, but rather more work-appropriate pieces to appeal to a range of customers shopping in contemporary departments.

The launch of House of Deréon’s day dresses comes at a time when the contemporary retail sector is facing major credit issues, with some stores struggling to pay their vendor bills. That, mixed with the contemporary customers’ loss of disposable income, could make for a tough time to enter into the market.

Despite these issues, Knowles is confident the new line will make its mark.

“I’ve always loved designing for daytime and our customers have been asking us to do something like this since we launched the evening collection,” Knowles said. “I felt it was really important to incorporate a few suits into the line, since that is something really important for many working women. And, it’s always nice to have a jacket in the office that is easy to take off for evening.”

The House of Deréon day collection is produced under a licensing agreement with New York-based Bahari Group Ltd., which also produces the brand’s evening line that launched in stores in January.

The collection also represents another stage in the evolution of Beyond Productions, the company founded by Tina and Beyoncé Knowles along with Jason and Arthur Rabin of Kids Headquarters. House of Deréon launched in May 2004 as a denim and sportswear line, licensed to RVC Enterprises. That collection never took off at retail, so it was pulled off the market and reintroduced as Deréon, a junior version of the brand, also with RVC Enterprises, for holiday 2006. That line, sources said, continues to do well in stores.

Beyond Productions also includes the Miss Tina collection, a women’s apparel and accessories line that was introduced on HSN in August 2007. Miss Tina is geared to women between the ages of 30 and 50 and retails from $20 for a bracelet to about $130 for a dress.

Knowles said she is gearing the new House of Deréon day line to select high-end department and specialty retailers. The collection wholesales from $70 to $100 and is being shown out of Beyond Productions’ showroom at 1384 Broadway in New York. While Knowles declined to give sales expectations, sources estimate the line could do as much as $10 million in its first year at retail.

“With strong trend-driven pieces, affordable prices, blends of sportiness, great separates and the strong dichotomy of Beyoncé’s viewpoints mixed with mine, the collection is sure to be impactful,” Knowles said.

Knowles said she hopes to grow the House of Deréon brand further by adding product categories such as accessories and shoes.

“I’m really hoping we can go into accessories really soon, especially jewelry,” she said. “Jewelry can really make a simple dress look fabulous. And as for shoes, that’s completely Beyoncé’s thing. She has already said that she would handle the design of the shoes. She’s very much into the clothes, but I can really get her excited about accessories.”