With Christmas just days away, Deloitte issued its latest retail insights report showing a more granular picture of the shopping season from Thanksgiving week through earlier this month.

The report found that there was an early start to the holidays. “Consumer retail spending increased modestly (1 percent) year-over-year in November; however, more spending occurred earlier in the month, as retailers offered extended promotions, and focused less on Black Friday as a singular event,” authors of the report stated.

Deloitte also noted that online sales remain “merry and bright.” The research report stated that while the number of visits to physical stores “increased over Thanksgiving week, e-commerce sales are the gift that keeps on giving.” Authors of the report said that digital spending increased “30 percent year-over-year in November, helping to offset brick-and-mortar sales, which declined 11 percent compared to November 2019.” 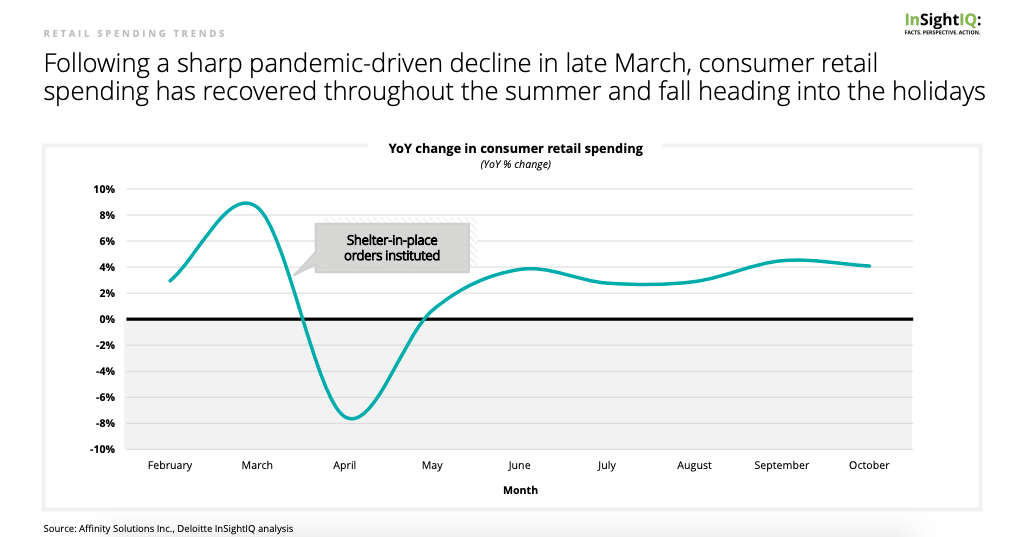 Looking at spending trends, authors of the report said while there was a 6 percent decline in the number of transactions during November, retailers, on average, saw a 7 percent increase in average basket size compared to the same period last year.

Other notable trends were the strength of home improvement and mass retailers this year, as the only sub-sectors “to see an increase in sales during Thanksgiving week; however, new product launches resulted in increased spending at electronics retailers in mid-November.”

The next notable report on consumer spending trends will be from Mastercard, which releases the results of its latest research on Dec. 26.