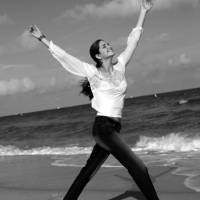 Lee Co. is making a new push into the contemporary market with a message that might resonate with shoppers in these shaky economic times: Why spend so much?

The company is launching for fall retailing a new subgroup called “One True Fit” under the Lee brand — though the logo has been tweaked on this line, to appear in lower-case cursive letters. It’s a group of contemporary style, low-waisted jeans with modern washes in cross-hatched denim. The goal is to get 18-to- 34-year-old women who currently shop for things other than jeans in national chains like Kohl’s and J.C. Penney to make their denim purchases there as well.

“That consumer is walking in the door” of national chains, said Steve Birkhold, vice president and general manager of misses’ at Merriam, Kan.-based Lee. “The question is, how [to] get the shopper who’s not buying jeans there to buy them.”

Kathy Collins, vice president of marketing, explained that the line was developed from market research the VF division did on Kohl’s customers. Lee executives learned that many women felt they were falling into the cracks in the jeans market between junior and misses’ lines, unless they were willing to trade up into high-end lines, like Earl or Seven.

“A lot of times, she would settle for junior jeans or misses’ jeans,” Birkhold said.

The line is built around a core five-pocket style with a low-rise fit and contoured waistband. Key colors are light and dark blasted blue denim, along with ink — a darker fabric that is also sandblasted at the thighs. The line will also include corduroy bottoms and some jeans with wide-tab waistbands, as well as some tops and jackets, but Birkhold said he expects at least 60 percent of sales to come from the core styles.

The jeans will feature minimal packaging, including a copper tag held on by a faux-suede loop. In place of the typical leather rear patch that bears the traditional Lee logo, these jeans feature a small tag with the lower-case Lee logo on the center rear belt loop.

“It’s more about the fit than the brand,” Birkhold explained.

The wholesale prices on jeans are about $18, with a targeted starting retail price of around $42, that could be marked down to about $30, he added.

Gordon Harton, Lee president, said he did not believe the new group would eat into Lee’s current sales.

“I think it’s incremental, because this is an additional purchase from a woman who’s not buying jeans in our marketplace,” he said. He estimated that the line could grow to represent between 20 and 30 percent of Lee’s women’s sales.

While Harton declined to discuss specific dollar sales projections, the percentages suggest the line could bring in more than $100 million a year in sales once it’s up and running.

Birkhold said the company will begin shipping the line in July.

“We didn’t want to ship product in too early,” he said. “Because even if we ship for June, the business doesn’t come in until mid-September or October.”

A lot has changed since New York-based junior sportswear firm Coolwear launched its denim jeans collection two years ago. The firm had sold primarily knit tops for most of its 18 years, and its entry into the booming jeans market has helped the firm grow its sales to $78 million by the close of 2002, according to Oded Nachmani, co-owner of Coolwear.

But now that the growth of the jeans category is starting to slow, Nachmani said he’s redirecting the brand’s bottoms direction, and including more nondenim bottoms for the back-to-school season. But he’s not completely getting jeans out of his mind. Nachmani said the line will include many nondenim bottoms with denim treatments such as washing, rinsing, overdyeing and whiskering.

“Jeans aren’t doing poorly,” Nachmani said. “But they have slowed a bit. How many pairs of jeans can one girl own? She already has so many, so now we have to give her the next thing.”

The next thing is what Coolwear is intent on offering. Nachmani and his partner in the business, Stuart Gelb said they will spend 2003 planning a shift for the Coolwear brand. While jeans were its first real move into the bottoms business to make it a true sportswear firm, the company now plans to have a more diverse bottoms assortment.

With that change, Nachmani and Gelb realized they needed to increase their staff.

“It used to be that we had everyone working on their own separate projects, so it was almost like they were running their own separate businesses,” Gelb explained. “Now we plan to work more as a team and build a more corporate type of environment.”

The company added two key new members to its staff.

One new hire was Lainey Goldberg, a former president of the private label business of Sun Apparel, a Jones Apparel Group division, who was named director of sales and marketing. The other is Eileen Bruckman, a former Urban Outfitters executive who was named merchandiser.

Gelb said his goal is to turn the Coolwear brand into a true lifestyle label. The Coolwear brand represents about 50 percent of the firm’s sales, with the balance being in private label. The brand’s target customer is 15- to 18-year-old girls who are very interested in trends. Coolwear plans to eventually expand its sportswear assortment to include an array of licensed items such as accessories.

For b-t-s 2003, the company plans to offer an array of new trends such as a military group that includes knit tops printed to look like soldiers’ fatigues with lace overlays and cargo-inspired bottoms, which Gelb said he believes will take up much of the former denim business.

“We have a preppy group, men’s wear-inspired group and Eighties group,” Bruckman explained. The company will still offer jeans.

“There is a lot of opportunity in casual bottoms in this business,” Goldberg said. “Denim has been so oversaturated and there has been a void for these nondenim bottoms in the market.”

While the owners stressed that they are not ready to begin licensing the Coolwear name just yet, they did say they would likely consider that in the future. They said they plan to advertise the brand, but must first concentrate on making it recognizable in the market.

“We want to use this year to develop the brand with a certain customer in mind — express the message we want to send so that when people see our clothes, they immediately think the name Coolwear,” Nachmani said.

Nachmani said he expects sales to reach the $90 million mark by the end of 2003.

At Greensboro, N.C.-based Burlington, chairman and chief executive officer George W. Henderson saw his total compensation rise 62.9 percent for the fiscal year ended Sept. 29 to $1.6 million. That includes $630,000 in salary, $630,000 in bonus and $290,088 in other compensation, according to a filing with the Securities and Exchange Commission. The final figure included a $280,350 payment that came from a key-employee retention program approved by the court.

That came in a year when the company substantially restructured itself, cutting its head count by 6,100, to 7,600 employees. Burlington also took a $100.8 million net loss on sales of $993.3 million last year.

At Galey & Lord, based in New York, top executives also saw their pay boosted by a court-approved retention plan, which covered 62 employees deemed critical to the company.

In fiscal 2001, the company did not pay bonuses to its top executives.