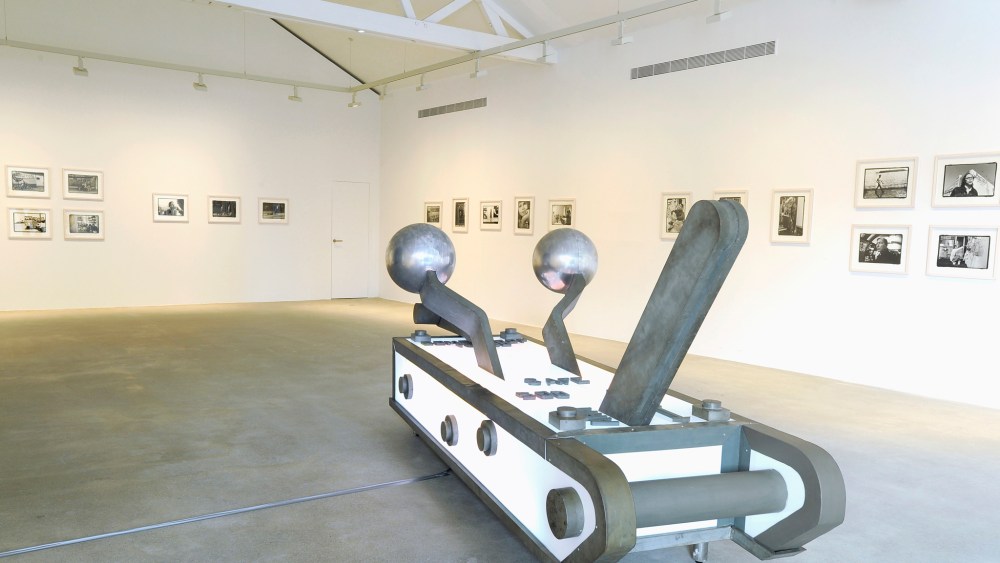 PARIS — The buzz around Los Angeles’ burgeoning art scene can even be heard in Paris, where an exhibition at the Pantin branch of Thaddaeus Ropac is shedding light on one of the city’s late talents.

“Icons of the Sixties,” opening Wednesday, showcases photographs by Dennis Hopper, whose copious movie career outshone his work as an artist.

“We’ve had these prints for a while. Hopper was a friend and frequent visitor to the gallery. But now, with L.A. being swept by this new wave of creative energy, we said we needed to do something with them,” explained Xaver von Mentzingen, who with Marcus Rothe co-curated the show.

The 30 black-and-white prints, signed by Hopper, span his most productive years from 1963 through 1967 and portray the actor as an astute and witty observer of his time. “This was a very special period for Hopper,” said Rothe. “The art world had started to take him seriously as a photographer — his pictures fronted the covers of Artforum for one, and he got his first exhibit in 1965 — but also, he started to take himself seriously.”

The eternal rebel, Hopper refused to abide by the rules of old Hollywood, said Rothe. Following his parts in — encouraged Hopper to work behind the camera, the actor was looking for alternative modes of artistic expression, taking up painting and sculpture, though most of his early work was destroyed in a 1961 fire of his Bel Air home.

“He was part of that bohemian bunch in L.A. of the Sixties, boasting a high concentration of high-profile actors, musicians and artists who were accessible to Hopper because he was their friend but also because they were interested in being photographed by someone who — like them — was a creative,” the curator noted.

Among Hopper’s subjects: Paul Newman, Jane Fonda, Roger Vadim, Ike and Tina Turner, influential art dealers and music producers, and nearly all of Pop Art’s heavyweights whom he met through Andy Warhol, after having reportedly bought one of the artist’s soup can paintings for $75.

Unlike what the exhibition may suggest, Hopper’s allegiance never lay with the rich and famous, according to Rothe. “He was obsessed with the notion of the American dream in the widest sense and, consequently, with those who were barred from it — the poor and the homeless. He was very political, following Martin Luther King during the Civil Rights Movement, and keen on capturing the changes shaking up American society. In that sense, he was a chronicler of his times,” he said.

Hopper described himself as a tourist with a camera, eager to capture the energy around him, while citing “abstract expressionism and jazz” as his main influences.

Yet he never lost sight of his film career. “I had been taking photographs because I hoped to be able to direct movies. That’s why I never cropped any of the photographs; they are all full-frame,” Hopper said in a quote provided by the gallery of the irregular, thick black frame seen in the prints, which make his subjects appear as if they were stills from a movie.

Working with Kodak’s Tri-X film also allowed him to shoot at night and without artificial lighting. “He basically anticipated the style of ‘Easy Rider,’ which would transfer the art of moviemaking from the studio out on the road,” said Rothe.

Following the film’s success, which Hopper co-wrote and directed, photography took a backseat. He wouldn’t take it up again until the Eighties, “always snapping away with a small camera resting on his chest, a very charming man — and elegant, wearing a beret and cracking jokes,” remembered von Mentzingen.

The Paris exhibit, which is set to run until Jan. 9, also features Bomb Drop, a sexually charged antiwar sculpture which the gallery restored after years of rotting away in Hopper’s New Mexico home.

Intrigued with Marcel Duchamp and assemblage art, the actor had put together the piece mimicking a WWII bomb-drop switch after “junking out with [his friend and fellow artist] Ed Kienholz,” as Hopper put it. “I made it in a big plastic thing with lights inside and went through the primary colors — blue, yellow, red — and this big phallus with these big balls would go from arm to safe, arm to safe,” he explained.

One is a letter from Dianne Vreeland, who helped the actor brainstorm for his book “Out of the Sixties,” published in 1986.

“I am sure it will be full of many amusing and outrageous stories, as you certainly were the 60s,” she wrote to him, before attaching three pages with — as Vreeland called them — “ingredients of the 60s,” listing “the Vuitton bag for the masses,” “the renaissance of Chanel” and “the jet-set beauties,” among those ideas which defined the decade.