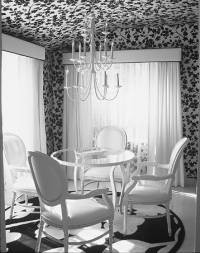 LOS ANGELES — Emerging like a stylish oasis in the middle of the California desert is Estrella, the latest boutique hotel designed by Kelly Wearstler, who brings her clean, modern aesthetic to the heart of Palm Springs, where Old Hollywood overkill typically reigns supreme. Instead, it’s Old Hollywood chic that Wearstler delivers.

“I wanted it to feel like an old-time Palm Springs resort, so it definitely has a Hollywood Regency vibe,” says Wearstler, referring to its Spanish-meets-French revival decor, so popular in the Sixties and Seventies. Estrella, known as the Star Inn in the Thirties, underwent a two-year facelift that will be completed at the end of this month. The 3.5-acre property features three pools and 74 rooms, including 28 villas. The interiors are done in clean white, accented with lemon yellow chairs and persimmon doors. It’s a palette meant to take the edge off the desert heat.

“Color is very psychological,” Wearstler says. “It’s so hot in the desert that when someone walks into a room, I want them to feel crisp and refreshed.”

Of course, Angelenos have long ventured to Palm Springs seeking rejuvenation, and no stay would be complete without taking to the waters. Wearstler and her team converted two villas into a spa “with all the bells and whistles,” including 10 treatment rooms, saunas, Vichy showers and soaking tubs.

Fans of Wearstler’s other projects — the Viceroy hotel in Santa Monica, Calif., and Avalon and Maison 140 in Beverly Hills — will be happy to find plenty of common seating areas in which to lounge, but Estrella also boasts plenty of nooks and crannies. Wearstler says the new hotel’s hallmark is its seclusion. “You can be very private with your own terrace and soaking tub or jacuzzi.” There are also in-room spa services offered and in-room dining, courtesy of chef Tim Goodell, who heads the restaurant at Viceroy.

Those familiar with Wearstler’s style will recognize the regal greyhound statues guarding doorways and theatrical tenting and draping inside and out as her own, but Wearstler also painted five of the works that hang over fireplaces in the villas. “I got pregnant midway through the project and had horrible morning sickness,” she says, “so I had to hire an artist to finish the rest.”

Wearstler’s design book, “Unexpected Style,” is due out from Harper Collins this summer, and her 12-piece furniture line, including a white vinyl chaise found in the Viceroy lobby, bows in the fall. But once Estrella’s renovation is complete, Wearstler says she plans to spend as much time as she can in Palm Springs, “being pampered and waited on hand and foot.”