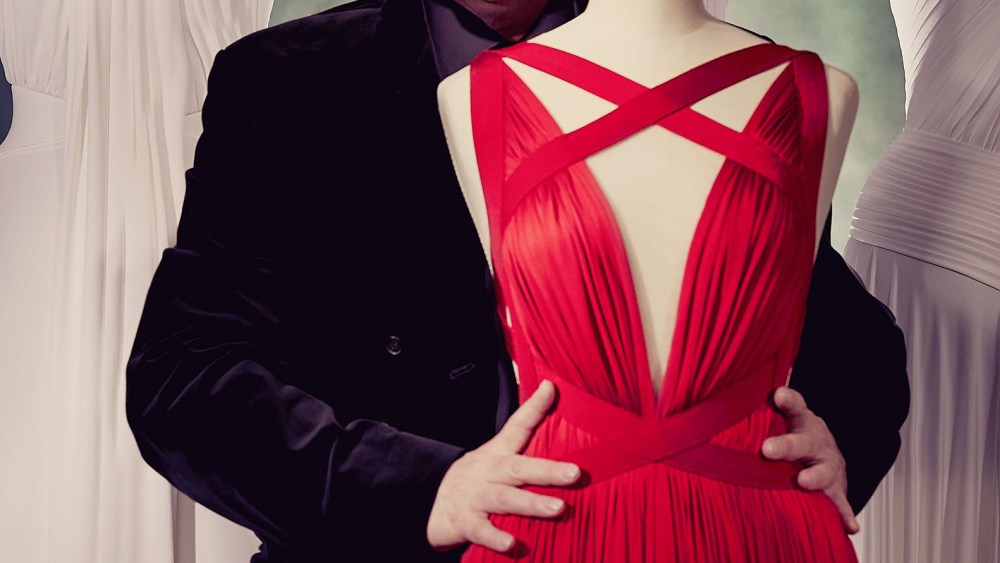 PARIS — Hervé L. Leroux, the French designer famous for creating the form-fitting bandage dress that was the uniform of Nineties models, has died at the age of 60, the Fédération de la Haute Couture et de la Mode said on Friday.

While the cause of death was not officially confirmed, a source close to the designer said he passed away unexpectedly in the night of Wednesday to Thursday.

Leroux, who was born in Bapaume in northern France, started his career as Hervé Léger but lost the commercial use of his name in 1999 after BCBG Max Azria bought the brand.

He began his career as a hairdresser before seguing into hats. In the early Eighties, he met Karl Lagerfeld, with whom he worked at Fendi and subsequently at Chanel.

Lagerfeld said he was the one who told Leroux how to name his label.

“We worked together for years. He was incredibly gifted with his hands, he could do everything. He was very amusing — I have never had an assistant who was as much fun as Hervé,” Lagerfeld said.

“I was the one who named him Hervé Léger because when he wanted to launch his own label, his family name was too heavy, so I suggested Léger [which means ‘light’ in French.] When he lost the right to use his name, I said to him: ‘Now you are going to call yourself Hervé L. Leroux,’ because he was a redhead [or ‘roux’ in French]. And the day you get your name back, you drop Leroux and you go back to being Hervé Léger,'” Lagerfeld said. “He knew how to work, he knew how to do a fitting, he had incredible technique. He was terrific.”

Leroux founded his ready-to-wear label in 1985, developing the signature bandage technique that sculpted the body like shapewear. Under the Leroux brand, he specialized in draped jersey, creating glamorous gowns that heightened the wearer’s natural assets, which he preferred on the curvy side.

He opened a store on the Left Bank and had a steady made-to-measure business, dressing celebrities including Cate Blanchett, Dita Von Teese and Kristen Stewart. The boutique and label closed this year, but friends said Leroux — who worked closely with his sister Jocelyne Caudroy — was brimming with projects.

Von Teese posted a photograph of the designer by Ali Mahdavi on her Instagram page alongside a lengthy tribute.

“He made the most exquisite dresses that showcased a woman’s beauty, rather than distracting from it,” she said, describing afternoons spent trying on his dresses at his atelier. “We would have the best time, I honestly could have only ever worn his dresses.”

The burlesque star said Leroux was the only modern equivalent to Madame Grès for creating draped goddess gowns.

“I loved him for his wit, his candor, his sublime elegance and, of course, his talent, which came from authentic obsession, with no care for the commerciality of fashion. I’m so sad to see him go, and so abruptly. We’ve lost one of the fashion greats,” she said. “Thank you, dear Hervé, for all of it. Rest in glamour, you’ll never be forgotten.”

“We had a lot of friends in common,” Mabille told WWD. “Even if our designs are very different, we had a similar fashion sensibility. Hervé was a brilliant man who was incredibly joyful, despite everything that happened, because life was not always kind to him. He had this capacity to always bounce back.”

Mabille recalled that in the Nineties, Leroux’s catwalk shows — featuring the likes of Cindy Crawford, Nadja Auermann, Carla Bruni and Helena Christensen — were among the hottest tickets in town. “If you had a banging body, you wore Hervé Léger or Alaïa,” he said.

“He was incredibly good at sewing. If you gave him a piece of silk jersey, he would make the dress. He didn’t necessarily need to have seamstresses with him; he was from that old school where he was capable of designing the most incredible collections, but also of making them,” he noted.

“The dresses are impeccable. If you are fortunate enough to see them up close, it’s absolutely amazing. They sculpt the body with a support structure inside, but everything is very comfortable. You could be a fantasy version of yourself, totally gorgeous with a controlled waist and hips, yet still be at ease,” Mabille said.

Susan Ashbrook, a product placement expert who consulted for Leroux in the U.S., paid tribute to his positive energy.

“Hervé was a vibrant, creative person and a joy to work with. I loved representing his collection to pair with some of Hollywood’s biggest stars. His career had highs and lows, but he never lost his desire to design and make beautiful clothing for women,” she said.

“They were my favorite dresses to photograph. Each time I would bring them to a shoot and they tried them on, they would go nuts for them. He was one of the only designers whose aim was to make women beautiful, and one of the only ones who knew the female anatomy,” he said.

The two men had been friends since 2011, even if their relationship had its ups and downs. “When I went to the Fine Arts School to draw, I would often buy macaroons and drop in on him,” Mahdavi said. “We had fights all the time because he was super sensitive, but we would always make up afterward.”

The photographer expressed sadness over the way Leroux was deprived of his brand name, adding that he should have received more support from the industry for his subsequent endeavors.

“I hope there will be a big exhibition of his work, that he will be rediscovered and that people will realize what a genius he was,” Mahdavi said. “Given that the fashion world did not support him when he was alive, I hope they will do so now and pay him a great homage that is due to him.”

“It would have been great if, after everything that happened, Hervé had been able to recover his brand. That would have been the most beautiful thing. Unfortunately, that is no longer possible now,” Mabille said.

Leroux was in and out of the spotlight after leaving the Léger brand. Between 2004 and 2006, he was creative director of Guy Laroche, designing the critically acclaimed midnight blue backless gown that Hilary Swank wore to collect her Oscar for best actress in 2005.

After keeping a low profile for more than a decade, he joined the Paris couture calendar in January 2013 as a guest member, showcasing his spring 2013 collection in his showroom on Rue de Seine. Five pieces were displayed in the windows of Colette for the occasion.

“I’ve never been away, I just didn’t do any shows,” he said about his comeback.

The same year, he created a dress for model Noémie Lenoir’s special appearance at the Crazy Horse in Paris, and he continued to dress its dancers for their red carpet appearances. Andrée Deissenberg, the cabaret’s chief creative officer, was in shock, having seen Leroux and his sister last week.

She noted affectionately that Leroux could be the stereotype of the grumpy Frenchman, but was in great form despite the closure of his store earlier this year. “It’s all the more shocking because I saw someone full of ideas, energy and good humor,” she said. “He still had a lot to give.”

Details of funeral services were not immediately available.Save