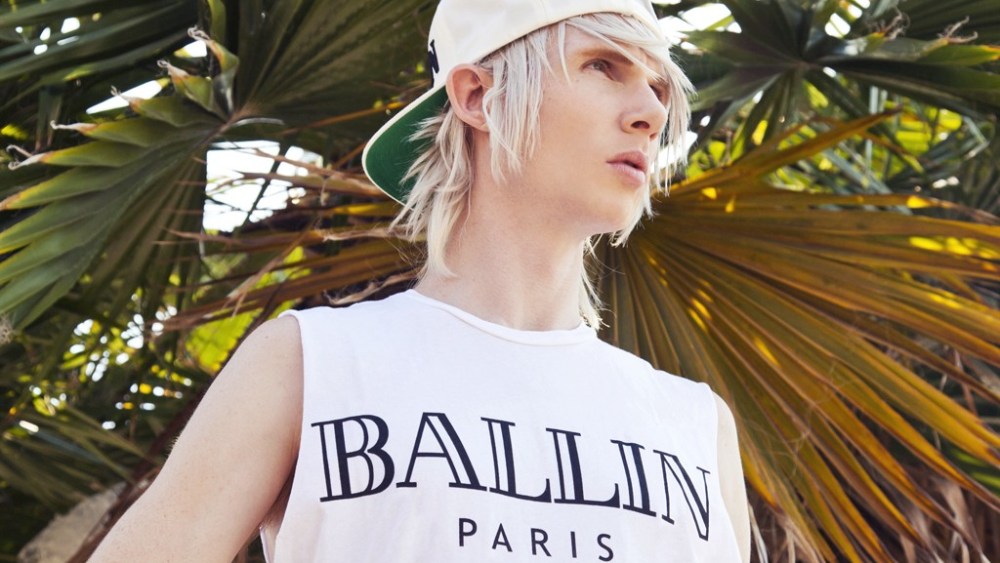 The status symbol du jour in hipster enclaves these days isn’t necessarily a luxury label — but rather a clever parody of a luxury label.

Instead of authentic Hermès, scenesters can rock “Homiés” sweatshirts by Brian Lichtenberg; instead of Balmain, there’s “Nawman” T-shirts by Reason Clothing, and rather than genuine Givenchy, an homage “Tisci” football jersey by LPD New York may garner just as many fashion kudos in some circles.

Luxury labels — and their famous logos — are being co-opted by streetwear makers in a blossoming marriage of high and low, chic and street. The trend is indicative of the pervasive appeal of luxury brands and the ongoing dialogue between high fashion and youth culture.

Central to the trend, however, are the legal issues of trademark protection — and what legal strategies designer brands should pursue to guard their logos while cultivating a potential constituency of style-savvy customers.

“I think this is a very current trend and issue. You have the convergence of constitutional law, free-speech issues, intellectual property law and a general overlay of business and commercial law. It’s a fascinating area,” said Douglas Hand, a partner at Hand Baldachin & Amburgey, a firm with a large fashion industry practice. “I think designer brands should be very vigilant to these issues. The main value of these companies is their intellectual property, specifically, their trademarks. Given that, to not diligently police and enforce trademarks in this industry is just not good business.”

Hermès is a particularly popular inspiration for streetwear brands at the moment. Apart from Lichtenberg’s “Homiés” designs, there are “Hotmès” hats from Unif and “Hornés” designs from What About Yves. The lines are available at streetwear retailers like Karmaloop and Asos, but also high-end stores such as Brown’s, Colette, Lane Crawford, Holt Renfrew, Harvey Nichols and Net-a-porter.

In a statement to WWD, Hermès said it would diligently protect its trademarks but that it also recognized some of the gray legal area that parodies present to brand owners. “Hermès is dedicated to vigorously protecting its brand against unauthorized uses that infringe upon its valuable intellectual property rights, but also respects the freedom of artistic expression,” the company said. “Every case is addressed on its own merits. Hermès does not comment on matters under legal evaluation.”

The legality of a parody rests on two key legal tests: whether there is actual consumer confusion between the two brands and whether there is dilution of the original brand’s value, said Joseph Gioconda, an attorney who specializes in intellectual property cases and whose clients include Hermès.

“It’s fair to say that in the designer community, there is a spectrum of opinion about these types of activities,” said Gioconda. “On one end of the spectrum are companies like Louis Vuitton who have taken a very aggressive stance to the use of their name or logo in any context. Other brands see it as a relatively inconsequential act with no direct threat to their own commercial value. Brands have different cultures and sensibilities.”

Riccardo Tisci at Givenchy and Olivier Rousteing at Balmain may be two designers who appreciate streetwear’s current fascination with luxury logos. Earlier this month, Tisci posted a photo of LPD’s “Tisci” jersey to his own Instagram feed. According to LPD founder Benjamin Fainlight, a number of “Tisci” T-shirts and jerseys have been ordered by the Givenchy office in Paris. Givenchy declined to comment.

Similarly, Rousteing has posted a photo on his Instagram feed of himself wearing a sweatshirt by Criminal Damage that riffs on the Balmain logo, turning it into “Ballin.’” Balmain declined to comment as well.

Other companies have taken a more overtly hostile stance toward perceived infringements of their trademarks. Earlier this year, lawyers for Dolce & Gabbana sent LPD a cease-and-desist letter after the New York company hosted a pop-up shop at Lane Crawford that included its “Gabbana” jerseys. “They thought it would cause brand confusion. I respect their wishes, but I think they’re misunderstanding the concept,” said Fainlight.

Cartier at the beginning of this year sent New York designer Fahad Al-Hunaif, along with retailer American Two Shot, cease-and-desist letters for creating and selling hats that substituted an off-color word in the Cartier script. “I responded right away and was very compliant,” said Olivia Wolfe, cofounder of American Two Shot. “We’re a young company, and we don’t want to fight with anyone.” Cartier declined to comment.

Wolfe said the trend of streetwear borrowing iconography from luxury labels and twisting it into something new and rebellious spoke to the cultural zeitgeist. “There’s something very familiar and highbrow to it, and something really lowbrow and cheeky at the same time,” she observed. “People like to push boundaries, and there’s a lot of humor to it. It makes luxury accessible and at the same time it says, ‘F–k you, I’m going to rep this my own way.’ It’s a new form of luxury.”

That attitude can be seen in Ssur’s eye-catching riff on Comme des Garçons, which it turned into a logo beginning with Comme and using an expletive and plastered on hats and T-shirts that were popularized by the red-hot rapper A$AP Rocky. Comme des Garçons declined to comment.

“High fashion has been grabbing from the street for ages. The script got flipped, and now the big brands don’t like it,” observed Wolfe.

Parody is, in fact, protected by the First Amendment, pointed out Gioconda — but only to a certain extent in commercial applications. “The legal test is whether there is some form of content or communication in the parody. Commerce can be protected under it, but courts put it in a second tier. Commercial speech is not entitled to the same level of protection as political speech,” he explained.

As streetwear parodies may not cause actual confusion among consumers — shoppers are unlikely to confuse a Hotmès hat for the real thing — the most effective tack for designer labels could be a dilution claim, said Prof. Susan Scafidi, academic director of the Fashion Law Institute at Fordham Law School.

“There are two forms of dilution. One is by blurring, which means making the brand less recognizable,” explained Scafidi. “The other is tarnishment, where the brand is made less elegant and desirable” — which off-color parodies like the Cartier and Comme des Garçons ones could easily fall under.

Scafidi said both Ralph Lauren and Lacoste have won previous cases against companies that parodied their logos on apparel. Conversely, Louis Vuitton lost a case against a canine toy maker who made “Chewy Vuiton” branded items, as the product line was so far removed from Vuitton’s core business.

Apart from legalities, there are pros and cons in terms of public relations in potentially going after parodies and homages, added Scafidi, who likened the trend to the genre of fan fiction in entertainment. “There’s a risk in going after people who are essentially your fans. The creators of ‘Star Trek’ don’t go after writers of their fan fiction, even if it’s terrible writing and off-color,” she noted.

At the most recent Agenda and Project trade shows in Las Vegas, the designer parody trend was in full swing. Reason Clothing showed a T-shirt that riffed on the Prada logo, transforming it into a “Prima Donna” emblem. The company has an extensive collection of parody T-shirts and hats on its e-commerce site, including designs that spoof Fendi (which is turned into “Trendi”), Balmain (turned into “Nawman”), Miu Miu (turned into “Meow Meow”) and Vogue magazine (turned into “No Clue”).

Rich Kids Brand used the easily identifiable Chanel font to spell out “Hooligans No. 110” on T-shirts and tank tops. London-based Criminal Damage also used the Chanel font for logo Ts — and even on the company business cards — while its other designs riffed on Givenchy (“Giveintome”), Hermès (“Hombrès”) and Moët (“Poët”). The company’s e-commerce site has a creative take on the Louis Vuitton “LV” logo, with the “V” replaced by a two-fingered peace sign.

Walk into the Ssur store in New York’s NoLIta and there are T-shirts and tank tops bearing the “Ralph Lifshitz” logo, mimicking the font and polo pony of Ralph Lauren. (Ralph Lifshitz is the designer’s original childhood name.)

“There’s a huge community of people who follow and respect and love these brands but can’t afford them. This gives them a chance to feel an emotional connection to those brands — but also be funny and cool about it,” said Phil Bassis, cofounder of Reason Clothing, which operates an e-commerce site and stores in New York and London. “It’s obvious that it’s a joke and there’s no confusion for customers. We have a Reason label in all of our products. It’s like a parody video on ‘Saturday Night Live.’ No one thinks it’s a real video.”

Still, Reason Clothing has received a handful of cease-and-desist letters over the years, which it has complied with. “If someone is unhappy, we pull the product,” said Bassis.

Jeanine Heller, founder of the line Ain’t Laurent Without Yves, has applied to register that mark with the U.S. Patent and Trademark Office, but was initially denied. “I think it’s original and fun and clever,” said Heller, who was previously the director of online and digital marketing at Miramax Films. She operates an e-commerce site and wholesales to Colette and Kitson.

Several small streetwear brands are riding their success in designer parodies to presentations during New York Fashion Week. Conflict of Interest — known for its “Ballinciaga,” “Bodega Vendetta,” and “Giraunchy” designs — and LPD are cohosting a presentation of their expanded ready-to-wear collections on Sept. 6. The multimedia installation includes influential hosts like Jenné Lombardo and Mia Moretti. Lichtenberg will present a full collection on Sept. 6 at Pier 59 Studios.

In a case of turnabout is fair play, some streetwear brands claim that other streetwear makers are now stealing from them. Heller has accused Reason Clothing of stealing her “Ain’t Laurent” designs, which the latter denies, and Lichtenberg says major fast-fashion retailers have adopted his “Homiés” designs. “I just think that’s the nature of the beast,” said Lichtenberg philosophically.