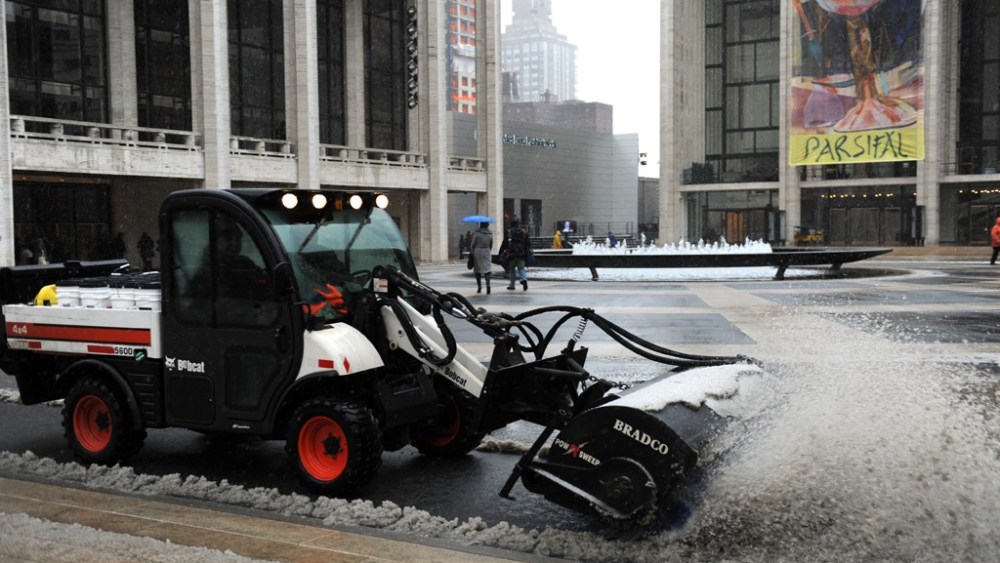 Ah, as Suzy Menkes recalls, for the New York shows of yore “in the crispness of October and the lovely beginning of spring.”

Instead, there’s a blizzard.

Scores of stores closed early Friday in the tri-state area due to Winter Storm Nemo even as designers and the fashion pack soldiered on through New York Fashion Week — although many European buyers and journalists, including Menkes herself, could not get to New York because of canceled flights. The clothes on the runway suddenly looked perfectly timely for the weather outside even as many fashion folk refused to give in and stuck to their vertiginous heels, short skirts and flowy dresses, snow and slush be damned.

None of the fashion shows were canceled or postponed as of press time Friday, with most designers due to show today saying they were sticking to the schedule. A spokeswoman for IMG, which owns Mercedes-Benz Fashion Week, said Friday, “We have been in constant contact throughout the night and into this morning with city officials, including the Mayor’s office, the NYPD, Council of Fashion Designers of America, the Department of Sanitation and the Department of Buildings. As we stated yesterday, we have a proactive plan in place to deal with Nemo. That plan includes additional crews to help with snow, ice and salt maintenance, increased interior heating, among other precautions. We also have our tent architect and extra crews on site to help manage our structure during the storm.

“Based on the most current weather models available, it is becoming clear that most of the snow accumulation and high winds will occur late tonight and end by early tomorrow morning. Mass transit continues to operate normally in New York, and there have been no service changes announced as of yet. In consultation with the city and CFDA, as well as our other partners, we have decided not to close Mercedes-Benz Fashion Week early this evening. All planned shows will go on as scheduled. We will continue to monitor the storm, and make changes to the schedule if they are needed.”

Kerry Youmans, senior vice president of KCD, which is handling about 25 shows and presentations during New York Fashion Week, said there were a group of editors who arrived before the storm, and about an equal number of international editors who have had delayed flights. “Most appear to be making it here by [this] afternoon or evening. We’re aware that could change further. A lot of them have re-booked for Saturday flights, so we’ll see. We have only a handful of people who have flat-out canceled.”

Youmans said KCD would move ahead with a normal schedule for today and is monitoring the weather.

Men’s wear shows, such as Nautica, General Idea, Billy Reid and Tommy Hilfiger, all went off without a hitch on Friday. In women’s, shows such as Rebeccca Minkoff, Yigal Azrouël, Monika Chiang and Tocca, all scheduled for Friday afternoon, went on as planned, as did Nicole Miller. Designers that are showing today, such as Lacoste, Jill Stuart and Sun Jung Wan are all going ahead with their shows.

Paul Wilmot, whose p.r. firm is handling shows such as Ruffian, Christian Siriano and Nautica, said all the shows were going ahead as planned. “Christian welcomes the opportunity to show in the face of the storm,” said Wilmot. Siriano shows on today at 4 p.m.

Deborah Hughes, whose p.r. firm was working on several shows over the weekend such as Monika Chiang, Son Jung Wan and Catherine Malandrino, said, “We’ve had a few people say they aren’t coming, but all the shows are going forward. Everything’s moving along. People are arriving in high heels and have scarves over their heads,” said Hughes, who was stationed at the tents.

Libby Haan, whose firm Haan Projects is working on shows, such as Monique Lhuillier at 7 p.m., said, “All tent shows are moving forward.” She said a couple of editors from the U.K. had to cancel out of the Thakoon show on Sunday, but most of the European editors were already here.

Menkes, fashion editor of the International Herald Tribune, was slated to fly to New York Friday from London, but her flight was canceled. She is now slated to depart today, and “let’s just hope it takes off. It’s absolutely maddening in every way,” she said, adding, “I think they’re very lucky in New York this hasn’t happened” before since the shows leapfrogged to the front of the international calendar, putting the February shows in the path of potentially inclement weather.

“I’m still hoping to get to New York, although feeling increasingly worried about how to cross the Atlantic, with so many canceled flights,” said Justine Picardie, editor of British Harper’s Bazaar. “I’m just about to rush out to Uniqlo to buy a bundle of thermal vests and socks; but I’m wondering, should I be packing Wellington boots, rather than Manolos?”

Editors from Vogue and Tatler also were delayed Friday, but hope to arrive today.

Italian buyers and retailers are expected to leave today and are waiting to hear from the airline companies whether the flights are confirmed. U.K. buyers are also hoping to cover the New York shows as usual: “Yes we are still planning to attend, and after the snow in Paris during pre-collections, we are prepared for the weather,” said Laura Larbalestier, buying director at Browns in London. “We are just sorry we can’t wear all our spring clothes and we have to re-create our winter wardrobe once again.”

To make sure key guests made it to Charlotte Ronson’s Friday night presentation, her p.r. team offered 30 of them a $40 discount for Uber car service. Yohji Yamamoto’s Y-3 show downtown Sunday afternoon was still on track. An Adidas spokeswoman said Friday, “The show has a total of 540 seats and we are expecting to fill them all. We are confident everything will be fine by Sunday. The weather forecast shows a big sun for Sunday.”

Meanwhile, stores and shopping centers closed in large numbers as Nemo began pummelling the Northeast Friday. With up to two feet of snow feared in parts of New England, retailers urged employees to close early and stock up on food, water, shovels and other snow survival supplies.

Simon Property Group, the nation’s largest shopping center developer, closed a total of 20 malls and outlet centers through New England, most around 2 p.m. and a handful at 3 p.m. Simon’s Chestnut Hill mall in Massachusetts closed at 11:30 a.m. Woodbury Common was set to close early at 6 instead of 9 p.m. The Roosevelt Field and Walt Whitman malls on Long Island were still open as of about 4:30 Friday.

The Mall at Short Hills in New Jersey, owned by Taubman, closed at 4 p.m.

“This is not something we fool around with,” said Frank Castagna, principal of Castagna Realty and owner of the Americana Manhasset luxury center. The Americana closed at 5 p.m. on Friday, two hours earlier than normal, and is set to reopen at noon today, two hours later than normal, Castagna said. That will provide ample time for the Americana crew to operate its melters and clear the ice. “One of the reasons we want employees out of here is to start the cleanup,” Castagna said. “We want our shoppers to know that if they can get out on the road, they don’t have to worry about ice here.”

Late Friday afternoon, J.C. Penney reported that about 50 stores were either closed or closing early due to the storm. At Macy’s Inc., which operates Macy’s and Bloomingdale’s, six Macy’s stores closed early in Massachusetts and Connecticut on Friday, between noon and 2 p.m. “Obviously we are watching the storm closely and making decisions about stores individually based on local conditions,” said corporate spokesman Jim Sluzewski.

Barneys New York officials were “monitoring the situation” but because there’s “no accumulation” at this point, there were no plans to close any stores as of early Friday afternoon.

The Natick Mall, one of the largest in Massachusetts, remained closed Friday and said it would be watching the storm’s progress to make a determination Friday evening regarding Saturday’s operating hours. The Maine Mall in Portland said it would be closing at 3 p.m., though the department store hours could vary.

At Copley Place in Boston, by around 1 p.m. the vast majority of stores were closed, though the center itself did not yet have a definite closing time on Friday afternoon.

At around 1 p.m., Taubman Centers reported that its malls in West Farms and Stamford, Conn., would close by midday.

Tanger Outlets said its Riverhead center on Long Island would close at 5 p.m., instead of the normal 9 p.m. closing Friday. The outlet center in West Brook, Conn. and the Kittery outlet center in Maine both were closed by 2 p.m., and the Deer Park outlet center, also on Long Island, was open but would reevaluate at 3 p.m. “Everyone is reevaluating at 7 a.m. Saturday morning,” said a spokesman for Tanger, about all of the companies properties in the path of the storm.

Tiffany & Co. planned to close its Fifth Avenue flagship two hours early Friday, going dark at 5 p.m. And 13 of the luxe jeweler’s other stores in Nemo’s path were either closed by midafternoon or planning to shutter early. “Our corporate office is clearing out now,” said a Tiffany spokesman around 3 p.m.

A spokeswoman for Fifth & Pacific Cos. Inc. said early Friday afternoon: “Our offices are not closing early, rather we are asking people to use discretion. Some retail stores in the Northeast that are directly in the path of the storm are either closed now or closing early.”

Then there were the parties around fashion week. Kate Spade was going ahead with its 20th anniversary celebration Friday night, while Bulgari planned to hold its party for 800 to celebrate The Serpenti Retrospective and The Year of The Snake tonight. After the weather turned, the luxury company decided to hire a welcoming crew to help keep guests warm an dry en route to the boutique. Ten trenchcoat-wearing men will stand out front holding six-foot umbrellas and offering guests hand warmers.