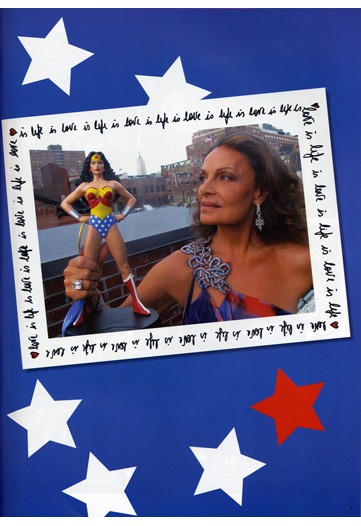 Much like her own story, Diane von Furstenberg’s core message is about empowering women.

With “Be the Wonder Woman You Can Be, Featuring the Adventures of Diva, Viva & Fifa,” the new comic book she authored, she doesn’t just turn herself into a bonafide superheroine, but offers inspiring tales about women and the life-empowering choices they face — all with illustrations by artist Konstantin Kakanias.

The DC Comics book coincides with the launch of von Furstenberg’s holiday collection, which is inspired by Wonder Woman.

“I always wanted to have these three characters Diva, Viva and Fifa, as in DVF, and we came up with the concept,” she said. “I called Konstantin, my artist friend, and asked him, ‘Would you like to do it?’ And now it exists.”

The key is that the three heroines — all of whom are wearing DVF clothes — make things happen. Diva, for instance, finds herself in a downtown bar to celebrate a male colleague’s successful leveraged buyout and his pending promotion. It turns out, however, that Diva was the brains behind the project. She looks at a reflective surface and sees a DVF, which emboldens her to “Be the Wonder Woman you can be.” Diva makes the point the lbo was her idea, and lands a promotion.

Viva, meanwhile, accompanies her older brothers to a music gig. Feeling intimidated to stay in the van, the reflection of DVF encourages her to get up on stage to sing. She ends up with a record deal.

Finally, mother-of-three Fifa receives news she is a finalist for a Gourmet Cooking award. Juggling the responsibilities of running a home, she is unsure that she can attend the ceremony, but DVF empowers her to get a babysitter and she wins the trophy.

“I am Diva, Viva and Fifa altogether, I am DVF,” von Furstenberg said. “It’s not so much that I identify with each of them, though. The idea is that if you feel insecure, look at yourself in the mirror, and through the reflection remember to be the Wonder Woman you can be. That’s my message.”

Also in the book are essays by Gloria Steinem and Les Daniels about the original Wonder Woman, a reprint of the superheroine’s first adventure, as well as several of the first covers.

The $25 comic, as well as a $50 special T-shirt and $230 tote, will be sold at DVF boutiques and dvf.com, and benefit Vital Voices, an organization that helps to empower women.

Von Furstenberg will celebrate the holiday collection and the comic series at her Meatpacking District headquarters next Tuesday, with a portion of the night’s proceeds going to Vital Voices.

The designer is already reaching a whole new generation of women with the comic. “Last weekend, I was in the car with my granddaughter Antonia, and she was reading it out loud,” von Furstenberg said, “I just thought, ‘What a wonderful message.’ There is a Wonder Woman in each of us, and once you understand that, you get what you want. And once you do that, you can give back.”