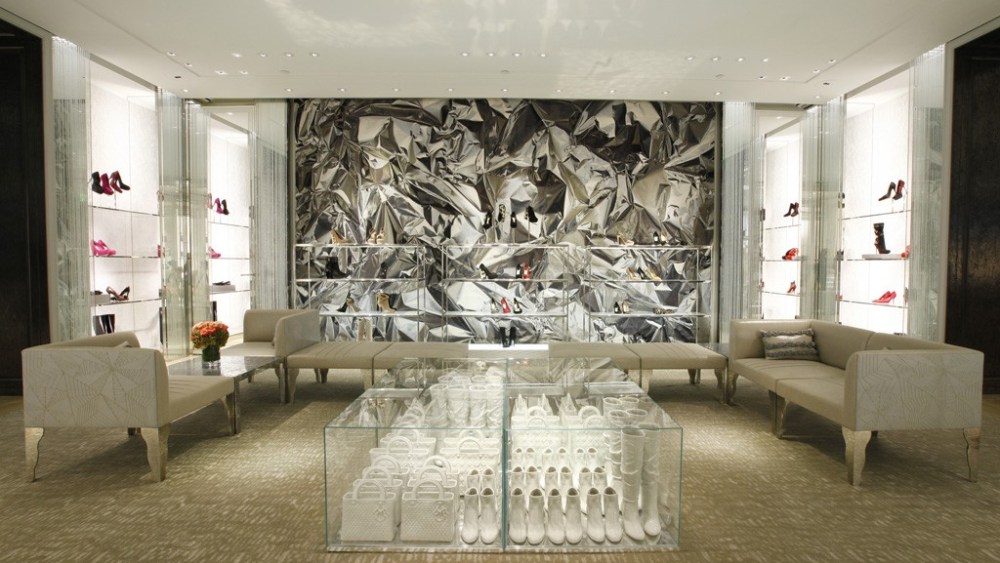 A few weeks after creative director Raf Simons made his ready-to-wear runway debut for the French fashion house and it unveiled a major reboot of the store on Milan’s Via Montenapoleone, Dior raised the curtains — quite literally, because the 24-foot facade of crystal, glass and chains was designed to evoke curtains hanging at a big Hollywood premiere — Thursday on a completely renovated Rodeo Drive flagship.

A sophisticated departure from the previous, simpler iteration of the store, the art-filled space ups the ante on the Beverly Hills shopping thoroughfare, which is having a reinvention of its own at the moment with storefronts blockaded for construction as seemingly every prominent luxury name has a remodel in the works, including Prada, Bulgari and Louis Vuitton.

Dior has a long history on Rodeo Drive, where it has operated the 5,000-square-foot location on the prestigious 300 block since 1990. The company’s chief executive officer Sidney Toledano suggested the store is more important than ever as the profile of Los Angeles rises.

“In L.A., it used to be only the film industry. Now, you have high tech. You have all these artists. A lot is happening in L.A. today, even in contemporary art. I see more people from Europe going to move and live there,” he said, adding that, “From a business point of view, it is a very good location. We see a bright future.”

Architect Peter Marino compared the decor to a private home or apartment with an incredible collection of furniture and art — more than 20 pieces are situated throughout the store. “It’s kind of like how I want to live,” he remarked. Despite being awash in art, Toledano emphasized the store isn’t a museum. “We don’t intend to sell those pieces even though they are very attractive,” he said. “Somebody asked me, why [I] don’t put the names on the pieces of art?’ In your apartment, you don’t put the names of who did the art or the chairs. We want to give the feeling of an apartment.”

The store is divided into five salons. The front one, which has a towering ceiling, houses handbags, small leather goods and watches. “It is really like a long gallery that is mirrored at one end, so it makes it feel like it goes on forever,” said Marino. The room features a film of Dior in various settings, a bench of interlocking ginko leaves made out of aluminum by French artist Claude Lalanne and a rotating chandelier by Lee Bul with crystal, glass, steel, aluminum, acrylic and wire.

The center of the store has a salon dedicated to shoes and another dedicated to a bag bar with exotic and specialty bags, and other novelty accessories. Art in those salons includes a piece on the ceiling by Rob Wynne of hand-poured mirrored glass in a cosmic pattern, a tapestry by Pae White that resembles crushed foil and wall-mounted, hand-blown, dented silver mirrored glass by Jeff Zimmerman.

The salon with rtw currently has the cruise collection, and the fine jewelry salon is at the back of the store. A VIP area is on the second floor. Some of the pieces contained in those rooms are a couch crafted out of nickels by Johnny Swing, a desk lamp and mirror by Veronique Rivemale, a stainless steel sculpture by James Morrison and a fireplace by Juan and Paloma Garrido topped with framed pictures of Christian Dior and Princess Margaret to foster the store’s hominess. “This has more artists than any other store I’ve done,” said Marino. “It just goes on and on.”

Raf Simons didn’t have a hand in the Rodeo Drive store, but Dior’s creative director is not absent from it. For the launch, the windows will contain items from his first couture collection against a backdrop of flowers — one window will have white phalaenopsis orchids and one will have pink celosia, carnations and hydrangeas — to reflect the floral abundance spearheaded by florist Mark Colle during the couture show. The windows will foreshadow Simons’ broader presence in the store that will come when his spring rtw collection is available in February. In Los Angeles, Toledano said, “Raf’s style will be very well accepted. I’m optimistic.”

Next up for Dior in the U.S. will be a redo of the Waikiki location in Honolulu, a Dior Homme store in Miami and a Dior store in Dallas. Although change has been the rule of late at the fashion house, Toledano indicated that, across the board, all the components of the brand are coming together nicely. “What he [Marino] has achieved with architecture is consistent with what the company is expecting from Raf. Things are going in the same direction,” he said. “It is true for many projects we have in the company. There is a moment of convergence. There is a same willingness in the design, in the boutiques and in the communications, [where] people are working with the same values of Dior in mind.”