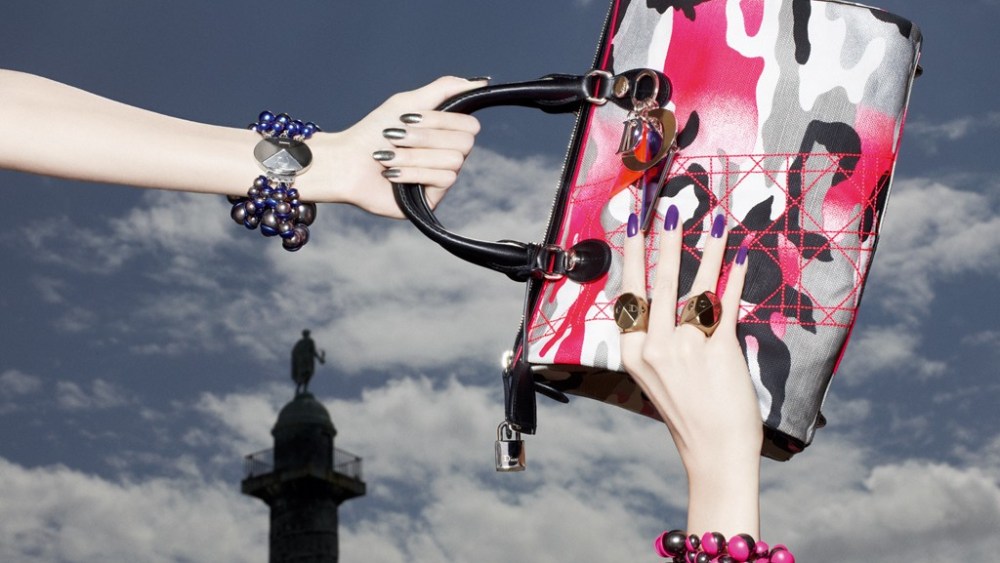 The range — spanning everything from wallets up to metallic leather handbags — is slated to arrive in select Dior boutiques worldwide on Jan. 9.

But they will first make an appearance during the Art Basel Miami Beach fair. A Dior pop-up shop is slated to open Nov. 28 in the Miami Design District for a three-week run.

“It’s young and modern. There’s a lot of energy,” Delphine Arnault, deputy general manager at Dior, said Monday during an exclusive preview of the project at LVMH Moët Hennessy Louis Vuitton’s headquarters on the Avenue Montaigne, where products were installed amidst black lacquer shelving and colored mirrors.

Visitors to today’s presentation in the building’s courtyard will first pass video columns bearing Reyle’s camouflage patterns which, Arnault pointed out, go well with the colorful figures by Japanese artist Takashi Murakami that stand like sentinels in the window.

“Art has always been at the center of Christian Dior’s life. We thought it would be great to continue the story and we chose an artist with a strong vision,” Arnault said, describing Reyle’s work as “joyful” in its use of vivid colors and shiny materials like foil.

“Christian Dior, before becoming a visionary couturier, was a gallerist,” she reminded.

Reyle applied his aesthetic to existing models in the Dior accessories universe, rendering Lady Dior handbags in matte or metallic leathers and canvas totes in vivid prints with a metallic sheen. Throughout, Reyle tilted the house’s famous “cannage” pattern on a 30-degree angle, occasionally stitched in neon thread.

Colorful bangles, chunky necklaces, sunglasses, scarves and a tight selection of footwear — including chunky platforms — complete the line. Retail prices range from about 190 euros, or $268 at current exchange, for a bangle, up to 2,850 euros, or $4,018, for a metallic Lady Dior.

To the famous “C” and “D” charms that dangle from Dior leather goods, Reyle added shards of colorful Perspex, telegraphing his penchant for found objects and industrial materials.

“We left him very free on this project. It’s important to give freedom to artists,” said Arnault, echoing a sentiment often expressed by her father, Bernard, chairman and chief executive officer of the world’s biggest luxury goods group. “[Reyle] was very interested in working on objects that would follow women all day.”

Extending the range to the beauty department, Dior developed five nail polishes and a limited-edition eye shadow palette with a mix of colors painstakingly set in camouflage patterns.

Reyle, who is represented in New York by Larry Gagosian and in Europe by Almine Rech, told WWD it was his first time working with a fashion brand.

“It was a challenge. At first I wasn’t sure about the result, but now I am happy,” he said. “In my work, I deal a lot with found objects, and influences beyond the traditional art context; for example, elements of subculture, architecture and design. That’s why I thought this project could make sense.”

Reyle said he was struck by how a big company like Dior develops its products much like an artist does in his studio.

“I am very curious to see ladies wearing the bags and other things on the street,” the Berlin-based artist mused, adding, “but I guess where I live I won’t see too many of them.”