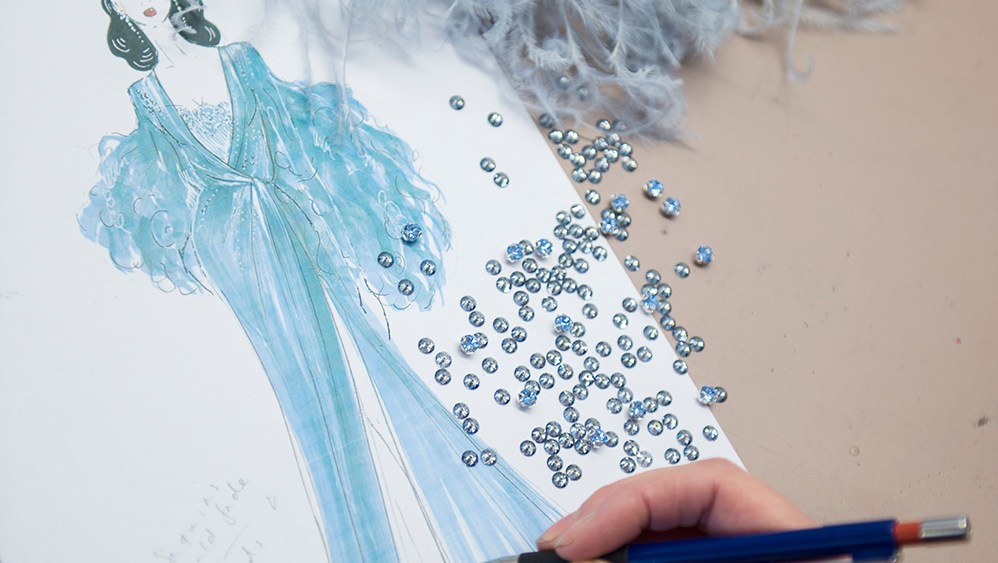 Jenny Packham may be one of the Duchess of Cambridge’s favorites when it comes to dressing for royal galas, but the British designer is also a standby for Dita Von Teese when the burlesque star takes it all off in her glitzy acts.

As Von Teese packs for her new tour, titled “The Art of the Teese,” premiering in Chicago today, she is including a pair of costumes courtesy of Packham. In a revamp of her act called “Lazy,” first performed at the Crazy Horse in Paris, she returns home out of the rain in a lilac blue satin twill trenchcoat and a matching beret dotted with 2,000 Swarovski crystals. Singing “There’s No Business Like Show Business” to choreography by Fatima Robinson, she trades the coat for a silk chiffon robe, slipping her arms into curled ostrich feather sleeves and reflecting light off the thousands of stones shaded crystal blue and light sapphire.

“Just a little beadwork doesn’t cut it,” Von Teese said. “The glitz is very important. Jenny really understands the amount of glitz in putting the costume over the top.”

Inspired by Jean Harlow’s soigné cover-up from “Dinner at Eight,” Von Teese said, “This is even better than that famous dressing gown that I’ve been lusting after since I was a teenager.”

To help Von Teese fulfill her dream, Packham watched a video of her original act and exchanged a series of emails before flying to Los Angeles for the first fitting in the dancer’s home. There, she faced the source of the palette for the new number.

“It’s inspired by my bedroom in a lot of ways,” Von Teese said, noting that she substituted the red that suffused the original act at the Crazy Horse with ethereal silver and icy blue. “In my decor, I don’t have a white wall in my entire house. I do like silvers and steely blues.”

Besides, Packham noted, “Meeting in person and seeing the garments on the body is so important when creating anything bespoke, but especially for Dita, because the movement of the garment is part of the illusion and the performance.” And the designer is pleased with how the dressing gown turned out. “The overall effect is fluid and mesmeric,” she said.

In addition to Packham, Von Teese called on pal Zac Posen to connect her with Brooks Brothers, which provided the tuxedos for her two male backup dancers. Catherine D’Lish, a burlesque dancer who frequently designs costumes for Von Teese, whipped up feather fans and the rest of her wardrobe, including a cowgirl get-up for the finale. Having evolved into a designer of lingerie and hosiery, Von Teese is pulling from her own lines to bedazzle a corselet and garter belt with crystals and to tint the back seams on stockings in silver. Christian Louboutin provided the shoes. “Everything is crystal,” Von Teese said.

The collaboration between designer and burlesque star is a reunion following their first partnership in 2012, when the pair drew inspiration from Betty Grable and Carmen Miranda for a flirty frock festooned with giant sparkly orchids. Since then, Von Teese has opted for Packham’s gowns offstage for appearances at amfAR galas and the British Fashion Awards, among other glamorous get-togethers. Of some 10 gowns by Packham hanging in her closet, her go-to is a black dress with a plunging neck and long sleeves accented by jet beadwork. “It’s femme fatale — like Morticia Addams circa 1940,” she said.

Whether the woman slipping on her dress is Catherine, Duchess of Cambridge, Von Teese or singer-turned-actress Janelle Monáe, Packham said she follows the same approach for their different events and needs.

“I always design with the woman and the occasion in mind,” she said. “The dress has to have just the right amount of drama required; it should complement the personality and the body of the woman wearing it, rather than overpower her.”

Packham walks away from the project with ideas for her bridal and ready-to-wear lines. “The drama of the chiffon gown would make a wonderful bridal runway piece. I’d love to do something with ostrich feathers for my bridal show,” she said.

For those who’d rather play dress up than tie the knot in Packham’s clothes, the designer said she was so enamored with the shape of the Forties-style trench created for Von Teese that she tweaked it for her forthcoming collection inspired by British heritage. “So there will be a version of the coat in the winter collection, which I show at New York Fashion Week in February,” Packham said.

Von Teese isn’t going to let the throes of a 10-city tour prevent her from missing that presentation. “I’m flying in from Toronto,” she said, hinting at her packing secret: “I always roll around with an evening gown.”