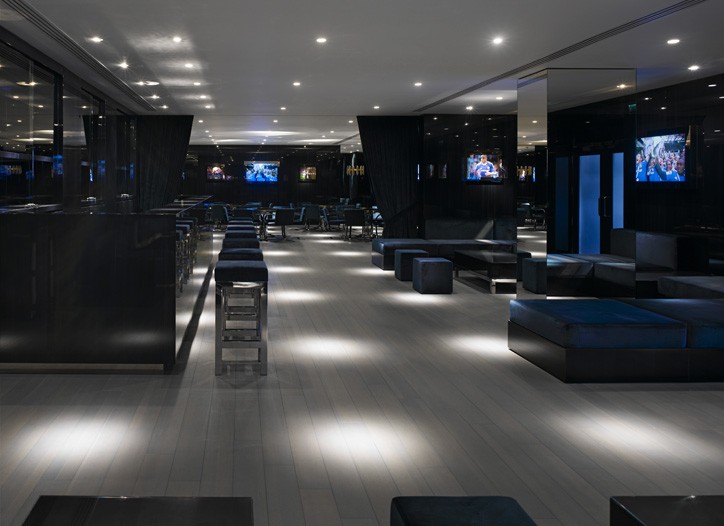 LONDON – The players at London’s Chelsea Football Club will have a whole new – Italian – wardrobe in time for the opening of Britain’s premier league soccer season next month.

Dolce & Gabbana has signed a three-year partnership to design the players’ formal wear and to re-design the directors’ lounge at the Stamford Bridge stadium in West London, the club’s home.

The announcement was made during a cocktail party at Stamford Bridge on Tuesday.

“We are really happy about this partnership and to be able to link our name to such a prestigious club like Chelsea,” said Domenico Dolce and Stefano Gabbana in a statement.

“Football players are style icons both on and off the pitch, and, on top of this, there is our love of England and of London, which has always been a source of inspiration for our work.”

The players’ outfits include a three-piece, two-button suit in dark blue wool twill, a blue poplin shirt, and a blue jacquard tie. The team’s colors are blue and white.

Chelsea’s lion crest will be embroidered on the suit’s pocket. There is also a blue wool and cashmere coat embroidered with the club’s logo. For the players’ free time, the duo has designed a blue poplin shirt worn with dark blue denim jeans and black calfskin sneakers.

There are also Dolce & Gabbana suits created for Carlo Ancelotti, the Chelsea coach, and for the male and female executives, along with accessories such as a blue calfskin suitcase, black leather shoes, and a gunmetal tie pin.

Ron Gourlay, chief executive of Chelsea Football Club, described the designs as “exceptional. We’re excited to be partnering with such a world-renowned and innovative design house,” he said.

The players will wear their more casual clothes when they travel to play a friendly match against Eintracht Frankfurt in Germany on Sunday, and will wear their formal uniform on the day of their first premier league game on August 14.

The directors’ lounge and reception, which will open August 14 when Chelsea’s first home game kicks off against West Bromwich Albion, have been re-designed with oak floors, mirrored fittings, and steel-framed chairs upholstered with blue velvet.

Dolce & Gabbana will also re-design the main reception at Stamford Bridge and its millennium suites corridor.

The collaboration cements Dolce & Gabbana’s affiliation with the world of sports. The duo recently outfitted the Italian national team with formal wear at the 2010 World Cup in South Africa, and have had Italian soccer players pose in their underwear ads.

Chelsea’s partnership with Dolce & Gabbana follows the club’s relationship with Giorgio Armani, who designed the players’ suits and directors’ lounge from 2007 through to 2009.