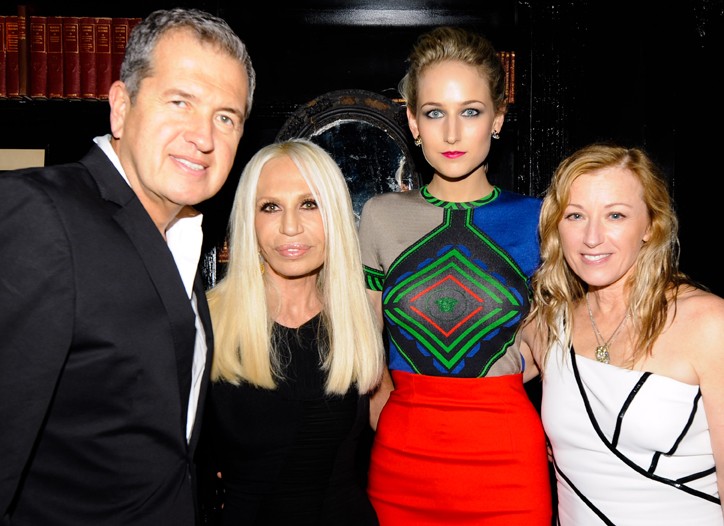 A select crowd of about 40 dinner goers headed to The Lion Wednesday night for an audience with Donatella Versace. Held in the restaurant’s well-hidden private dining room (“A right at the top of the stairs and push on the wall with the Basquiat,” the hostess explained), the dinner had been arranged for the almost quaint purpose of allowing the designer to greet a few people she didn’t know too well or at all.

The room, a very cozy, very dark study decorated in animal skins and a lit fireplace despite the 80-degree May heat outside, quickly filled with guests during cocktail hour. Jen Brill, Harley Viera Newton and Lauren Santo Domingo all stopped in to greet the designer as did Cindy Sherman, Greta Gerwig, Joseph Altuzarra, Adam Kimmel and wife Leelee Sobieski.

“They just said, ‘She’s having a dinner, it’s very small, it’s not that many people and do you want to come?’ and it sounded nice,” Sobieski explained, sitting on a couch during cocktails.

Versace was in town for El Museo del Barrio’s Gala tonight, which will honor Mario Testino, who was also on hand Wednesday. In addition to the newcomers, she chatted up the photographer, an old pal, and her daughter, Allegra.

“In New York that can happen, you can put a good group of people like this together,” Vesace said before heading into dinner. She singled out one dinner guest in particular. “Cindy Sherman, I’ve been a big fan of hers for so many years!”

“I like to befriend all different kind of people, you know?” Versace continued “Because fashion is a very selective group. But we get inspiration from each other. But I love fashion. I love art.”

It can’t all be fashion, WWD surmised.

“I hate fashion,” she said with a hearty laugh.