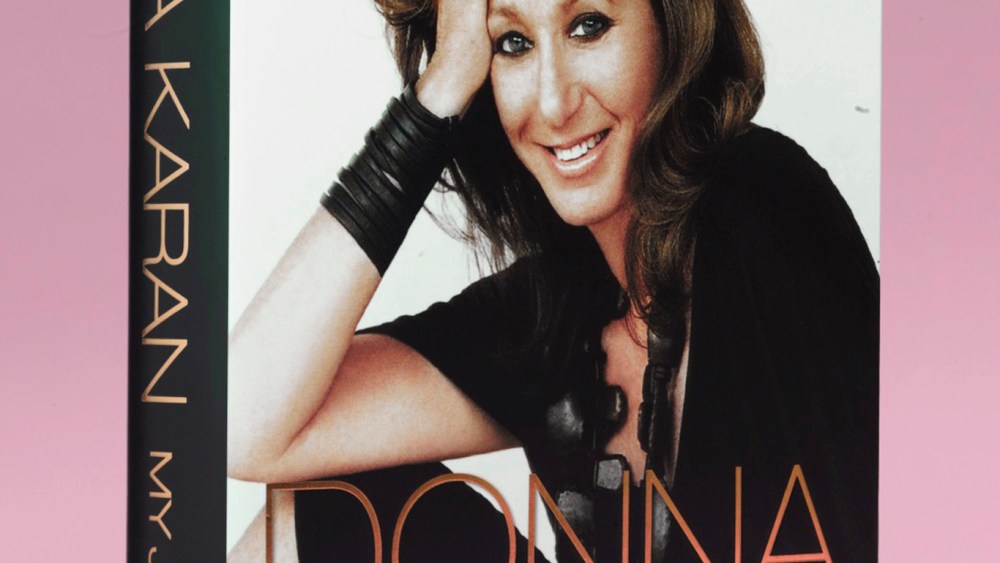 Three months after relinquishing her role as chief designer at Donna Karan International, Karan, 67, is in the spotlight again. She has penned an autobiography, “My Journey,” that will be released Oct. 13 (Ballantine Books, an imprint of Random House, $30) and will be making the book tour rounds.

The final chapter was due immediately after Karan left the company she cofounded in 1984 with her late husband, Stephan Weiss, and Takihyo Inc. Her main collection was put on hiatus, and Karan — one of the most important designers in the history of American fashion — became an adviser. No surprise, then, that the ending of the book, which she’d been working on for a year with Kathleen Boyes, took a dramatic turn.

“I knew I’d be sad, but it was truly heartbreaking,” writes Karan in the final chapter. “I had to say goodbye to the people who have become my family, who have stood beside me through every professional up and down, every good and bad review, and the many CEOs and management teams.”

Not prone to keeping secrets, Karan shares many details about her life — warts and all — in her book. She writes about her difficult childhood in Woodmere, N.Y., losing her father in an automobile accident when she was three years old, living with an emotionally distant and depressed mother, flunking her draping class at Parsons School of Design, becoming engaged to her first husband Mark Karan and suddenly meeting Stephan Weiss and falling head over heels in love.

She reveals that while married to Mark Karan, she became pregnant with what she thought was Weiss’ baby and decided to have an abortion.

Then there’s her propensity to go topless. She discloses it wasn’t unusual for her to be topless in the office (“just about everyone I’ve worked with has seen my breasts,” she writes) because she doesn’t wear a bra and loves to try everything on.

Karan describes how she felt about being fired from Anne Klein, starting up her own namesake label with her “seven easy pieces,” the immediate success and the inherent growing pains; going public in 1996, and renting a fabulous yacht for the party.

“That’s the last good memory I have about going public,” she writes. With her sense of humor, Karan describes the sale of the business to LVMH Moët Hennessy Louis Vuitton for $643 million in 2001. When it came time for her to sign the papers, the designer told the room that she just got off the phone with her psychic, who told her that Mercury was in retrograde, which meant that was a terrible time to enter any kind of contract. The room went silent and finally Eileen Nugent, her powerhouse mergers-and-acquisitions lawyer, asked to speak to her in private. A minute later, Karan signed the contract. “She told me, and I quote, ‘This is the best f–king deal I’ve ever seen in my whole career. Now sit down and sign the papers. Now,’” she writes. Weiss died soon after.

Throughout her career, Karan developed a close friendship with Barbra Streisand (who wrote the foreword to the book), dressed President Bill Clinton, and met the Queen of England (at Bloomingdale’s, no less), as well as the Dalai Lama. (The latter after a woman in her sample room asked her whom would she would most like to meet and, three days later, an introduction was arranged.)

“My personality is do, do, do. Blame it on my ADD or my fear of stopping and being alone — whatever the reason, chaos is my middle name. I create it better than anything else I do. It also brought me an amazing, exciting life,” she writes.

In an interview with Karan last week while she was in Paris showing her Urban Zen collection, she said to write the book, she would sit down and have long conversations with Boyes, reliving her life. Things that she didn’t remember, her friends and family did. “I think all of us have those moments in our lives that we don’t forget, that are embedded in our memories,” she said. While she doesn’t recall her childhood completely, there are moments that she does, such as when Michael Sprinzen kissed her for the first time in first or second grade, going to Camp Alpine, or when she broke a girl’s nose with a baseball bat.

Much of Karan’s journey has been impacted by the deaths of people close to her, and by births. “I see that I’ve dealt with a lot, but so have other people. My father died. When Anne [Klein] died, that was really a shocker. Anne died the week I had [daughter] Gabby, and I had the collection due. You couldn’t make this stuff up, even in a movie script,” said Karan, who had planned to be a stay-at-home mom.

Which brought up the question whether she has sold the movie rights to her story. “Not yet,” said Karan, ruminating on who might play her. “We thought about Susan Sarandon in certain points of my life,” she added.

Even though she was in a seemingly happy marriage with Mark Karan, she left him for Weiss, who she has described as her soul mate. That seemed to be a pretty risky move, considering Weiss also was married with two kids.

Does she consider herself a risk-taker? “Not really. If you think of how many years I’ve been practically working in the same place my whole life. I haven’t moved around from country to country. I was born on Seventh Avenue, I lived on Seventh Avenue. I didn’t want to die on Seventh Avenue.” Coming to terms with the decision to finally let go of DKI was helped by her desire to travel and see the world.

“I kept having all these fantasies of everything I wanted to do, and as the clock was ticking, I was concerned. I think that was always a question for me,” said Karan. When she stepped down from DKI in June, she said it was to focus on her philanthropic activities and Urban Zen. These days, her bucket list is brimming with places she wants to visit.

She can’t foresee where she’ll be in five years, and said a year ago she never would have predicted that she wouldn’t be employed by DKI. One thing she knows is she doesn’t plan to stop working, but also doesn’t want to stop living. “I have a lot of work to do with Urban Zen,” said Karan, who just came from a fabric-buying trip to Milan. She said the Urban Zen collection is clothes that are based on reality. There are things to wear in the city and wear out in the Hamptons. “It’s more of a reality check. It’s almost like my personal closet,” she said.

Karan is financing Urban Zen herself, but said she’s not closed off to partners. But she would want to find partners who were not only into clothing, but the Urban Zen Foundation, as well.

As is well-documented, Karan’s designer collections often went off on tangents after she’d come back from a trip to Bali, for example. Asked whether her customer embraced her arty side, or whether it turned off her loyal customers, she said, “It depends. We were talking prints and novelties way before anybody else was talking about it. I had these cultural ideas and artisanal ideas. That happened about four years ago when I was really doing a lot of traveling all around. It was way before the market was ready for it. Sometimes you are a little bit before your time. Now I think it’s very obvious. The kind of prints are all over, that’s all you see.”

Karan is proud of the work she did with the collection and has no regrets. Her final fall line is selling well at her boutique in London, as well as at other specialty stores, she said. She insists she didn’t take her eye off the ball with all her outside interests, although others might not agree.

Asked to name highlights of her career, she ticks off the Anne Klein show she did with Louis Dell’Olio at the Winter Garden Theatre, going to the Palace of Versailles in 1973 (for Anne Klein) for the runway competition, and her wedding show, which occurred when she was designing for her wedding (to Weiss) and the Anne Klein collection at the same time. “So my wedding and the collection had the same fabrics,” she said. Other highlights were the first Donna Karan collection show and the first DKNY show.

As for the lowest point of her career, she didn’t hesitate: “Probably now. This is the most difficult time. I never expected it to be as difficult. Leaving Anne Klein was impossible. I thought I would die. I never had anything harder in my life than that. I thought I was Anne Klein. I designed Anne Klein longer than Anne Klein.”

The fact that Karan no longer owns her name and that LVMH has suspended the Donna Karan collection obviously irks her.

“That’s difficult. It was Stephan who did it. He was passing away, and he didn’t want to leave me as a public company, and it was really my only choice that I had. If Stephan wasn’t there, and I was just by myself running a public company, not even a maybe…”

The company had gone public in 1996 and had a hard time. Karan said the firm had so many businesses that were just getting started, such as the beauty company and the men’s wear business. “We were not prepared to be a public company in my opinion. I felt that was a very difficult time,” said Karan.

She believes that one doesn’t really know what will happen next until it happens. She didn’t go out and say she wanted LVMH to buy the company; they approached Weiss. “Whatever’s going to happen right now will happen without me planning it. If I look at my life, I didn’t plan anything. It was all written for me.”

When it comes to the future, Karan strikes a spiritual note. “Some people say you just have to be aware and take the right steps at the right time. The light is guiding me. He’s guiding all of us.”