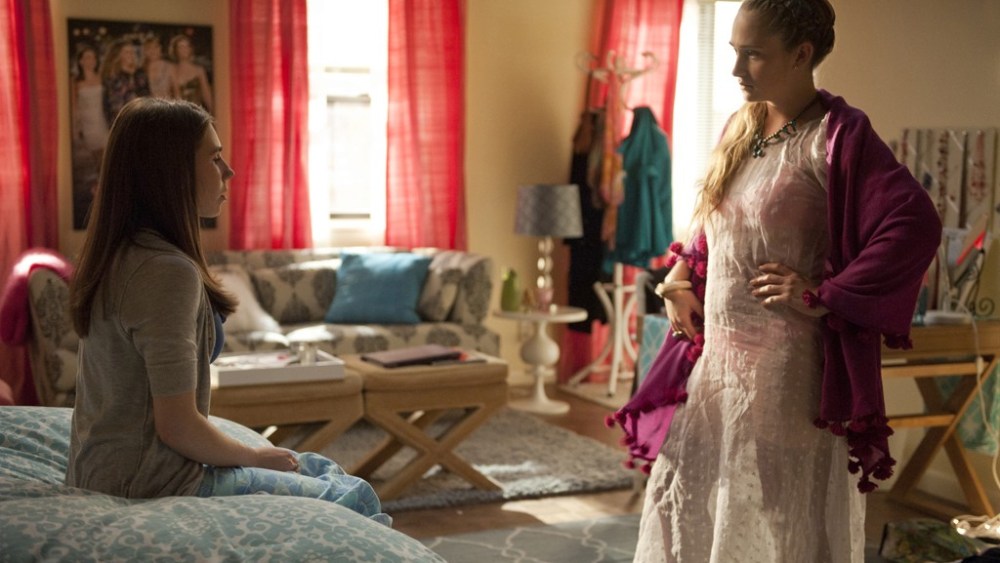 The Emmy-nominated TV drama “Girls” on HBO may focus on the stark reality of cash-starved twentysomethings as they chart their lives in New York City, but the dramedy also is a melting pot of iconic American products, specifically underwear and lingerie, said Jenn Rogien, the show’s costume designer.

Created by and starring 26-year-old Lena Dunham, who plays aspiring writer Hannah Horvath, the show chronicles how she and her close-knit group of friends in Greenpoint, Brooklyn, navigate their lives “one mistake at a time.”

Rogien described the cast’s characters and their underwear preferences this way: “We think of it as character underwear….These are young characters who gravitate towards modern silhouettes and fabrics and fun colors. I like to use modern color contrasts and add a little colorblocking,” explained Rogien. “The girls are budget conscious so we are very much guided by these characters who are young and live in an underpriced world.”

“I would describe Marnie as sleek. She’s into Calvin Klein and DKNY underwear,” Rogien said.

Zosia Mamet plays bubbly and innocent college student Shoshanna Shapiro, a character Rogien thought should be portrayed in colorful undergarments. “She’s not style conscious but she is a New York girl and wears Victoria’s Secret. Her color palette is a little softer in pinks, robin’s-egg blue and teals to keep her girly and feminine,” Rogien said.

She noted that Jemima Kirke is the “eclectic world traveler” of the group as Jessa Johansson, Shoshanna’s British cousin. She wears Cosabella in “great colors and unconstructed shapes because she’s a free spirit. For her, undergarments are her accessories.”

Rogien said strong attention is also given to men’s underwear in the show for Adam Driver, who, as Adam Sackler, is Hannah’s aloof lover and a part-time carpenter, and Alex Karpovsky as Ray Ploshansky, a coffee shop manager and friend who takes Shoshanna’s virginity at the end of the first season finale.

“Adam is very no-nonsense. He likes to wear long underwear — a union suit as pajamas. We even had a scene with Adam and Hannah wearing union suits together. She even goes outside on the street in them….We ended up dyeing and distressing the union suits to look older and worn,” Rogien said.

Assessing the overall look of the characters, their wardrobes and undergarments, Rogien said she tries to not make it “brand apparent.”

“It’s not about it being a brand or a logo. I specifically look for a brand that’s not logo driven because I think it could be distracting on TV,” she noted.

Rogien further noted that, in order to capture the ambience and mood of the characters, she shops stores that “the girls” would shop in the show.

“Hannah would shop at Anthropologie and Madewell, while Marnie would go to Tahari and Diane von Furstenberg. Shoshanna goes to Milly, H&M and Victoria’s Secret, and Jessa does vintage shops as well as Loehmann’s and Zara,” she said.

Rogien, who is represented by Matchbook Co., said she is in discussions for brand collaborations, including intimates.