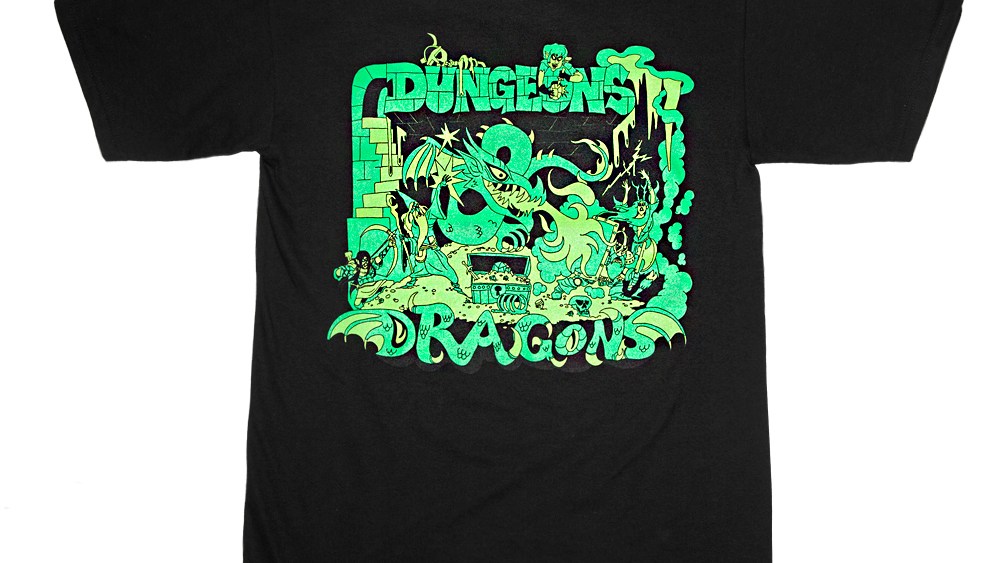 Warner Bros.’ Dungeons & Dragon film is still a few years out, but artist Todd James’ D&D T-shirt collection will be the main attraction Sunday at the Twenty Sided store.

Like many of the fans expected to show up at the launch in Brooklyn, James started playing as a teenager and got back into it a year or two ago, now playing two to four hours at a stretch. As gaming has become more immersed in pop culture, digital special effects have improved and interest in such fantasy story lines like “Game of Thrones” and “Lord of the Rings” has surged, Dungeons & Dragons has shaken off its better-left-unsaid reputation. Released in 1974, there are now six million people playing the game at any given hour, according to a spokesman for Wizards of the Coast, the game’s producer.

In a phone interview, James noted D&D is popular with a clutch of writers, animators and Hollywood-ers like Vin Diesel, “Rick and Morty” co-creator Dan Harmon and Titmouse Inc. founder Chris Prynoski. “It still applies to what they want to do and it still has value. It’s not completely like a fringe thing any more,” James said. “You’re using your imagination and storytelling. I also like it because it’s completely analogue. It’s not a video game. It’s inside of your mind. You can kind of do anything – you’re building worlds and stories. And you’re doing it with other people.”

Born and raised in lower Manhattan, James started out tagging graffiti on subway cars parked in the rail yards overnight. He later designed The Source magazine’s logo, art for The Beastie Boys and projects for Nike, among others, but more recently has focused on his own art. James’ creations were featured in “Bridges of Graffiti” at this year’s Venice Biennale, an event he also attended in 2001 for “Street Market,” which he cofounded at Deitch Projects. Now more focused on his paintings and art exhibitions, the New Yorker had a show at Tokyo’s Nanzuka gallery earlier this year.

Before teaming up with the specialty store Mishka to create his four limited-edition T-shirts, James spent a few days this summer at GenCon’s Dungeons & Dragons convention. “The amount of people there was insane. And I just read that they’re expanding it next year into an arena,” James said.

What he eventually decided on was two T-shirts with “fully-involved scenes with multiple characters” and two with iconographic lettering such as a “D” with a skull with a reaper’s head and an “O” that is the image of a fireball. Attuned to the fact that the typical fan plays for hours, Sunday’s launch will be a nine-hour event complete with games and giveaways.

Earlier this year, James helped Pharrell Williams redesign a pair of Superstars for Adidas. Having collaborated on other projects, they decided on three-dimensional molding for the classic sneakers’ signature crown toe. James said of Williams, “He’s super-easy to work with — agreeable, lets you do your thing and kind of has an idea of what he would like. It wasn’t a whole lot of back-and-forth. He has trust. Maybe since he’s a creative person and is making music all the time, he recognizes that that’s the best way to get results from people.”

The artist, who said he knows Mario Sorrenti from “back in the day,” said he is “not completely unaware of fashion but doesn’t seriously follow it.” James’ ideas are a compilation of factors — “anything on the news, seeing other people’s work in galleries, and stuff that is just completely unrelated but that for whatever reason strikes a chord — like somebody on the street in a hat or an idea or illustration in a book.”

In talks to develop Dungeon & Dragons-inspired rides in existing theme parks, Wizards of the Coast is also looking to do more collaborations like the one with James. Fun as this month’s Art Basel was (his work was featured along with KAWS, Swoon, Dustin Yellin and Shepard Fairey in the Swizz Beatz-curated, Bacardi-presented “No Commission Art Fair”), James said he was eager to get back to New York for the Mishka D&D project. “This particular thing is interesting to me and the Pharrell thing was cool,” he said. “Every once in a while, if something comes along and I like it, I’ll do it. It’s best like that — little things here and there.”