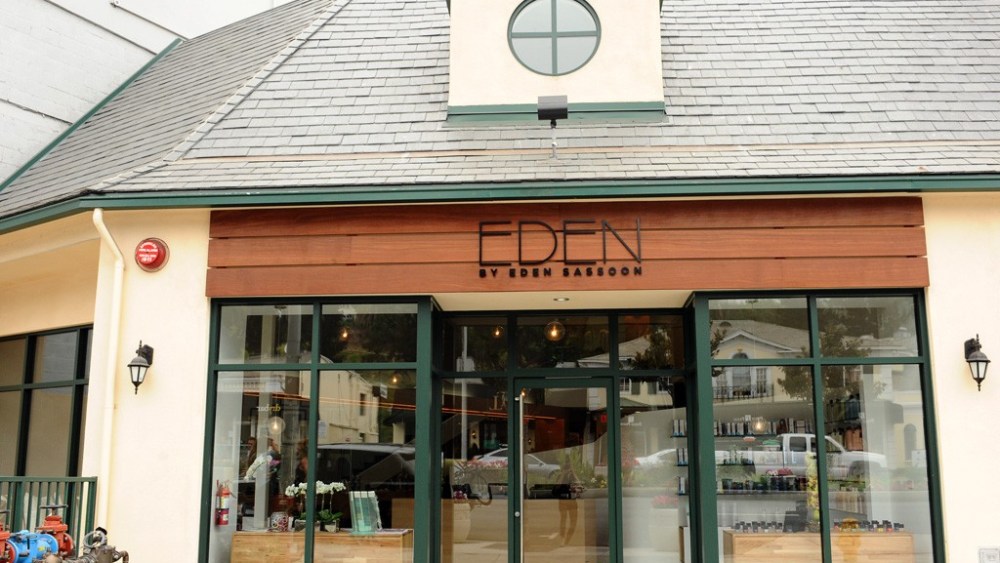 A year and a half ago, Vidal Sassoon’s daughter Eden was getting her hair blown out at a blow-dry bar and had an epiphany: the convenient, affordable concept was great, but she could make it better.

“I want to take it to the next level,” said Eden Sassoon. “Women need something more, where they can go get their hair blown out, get makeup done, get their nails done [and] look great. They can go to one place for value and have it be done by my standards because I’ve grown up in the business, and I know what it’s like to have the best of the best working on me.”

With the help of Fred Segal Beauty founder Michael Baruch and the approval of her father, who died in May, Sassoon has opened Eden by Eden Sassoon on Sunset Boulevard in West Hollywood. Described by Sassoon and Baruch as a finishing studio, the 1,500-square-foot location designed to evoke a casual, Malibu beach house vibe offers blow-dries, makeup application and manicures, and pledges that a woman can walk out in 65 minutes with their hair, nails and brows done for $65. “We’re trying to create a new category in this space, and it’s really about your finishing,” said Baruch.

Sassoon and Baruch felt like they were hitting on something viable when 80 percent of women in focus groups they conducted reported dissatisfaction with how their hair was currently being finished at upscale salons and blow-dry places — and often redid it when they got home. “The key is going to be the quality of the work. If we can provide the value, convenience together with quality, we’re going to win,” said Baruch.

Baruch, familiar with staffing from his days at Fred Segal Beauty, knew the challenge would be drawing talented hairdressers to Eden by Eden Sassoon. Sixteen stylists were vetted during a rigorous audition process in which Segal Beauty alumni Kristoff Ball and David John, and Kaz Amor, owner of Warren Tricomi in West Hollywood, judged their skills. An additional around eight stylists are rising stars actually employed at Ball’s namesake salon, Serge Normant for John Frieda and Warren Tricomi who work at Eden by Eden Sassoon one to two days a week.

In his pitch to the salons where the hairdressers are regularly employed, Baruch said, “While they’re not working at your shop, they will come here and they will do the work that we need on our clients, and they will have permission to take those clients to your shop to do cut, color and services we don’t provide.”

In his pitch to stylists, Baruch asserted it’s possible to make more money at Eden by Eden Sassoon than at a high-end salon. He estimated an average service at Fred Segal Beauty, which closed in 2008, cost $125, and the average person patronized the salon once every eight weeks. At Eden by Eden Sassoon, where success will be determined by volume, a customer may come in once a week and pay a total of $280 during an eight-week period if they just get $35 blow-dry services each time.

Eden by Eden Sassoon’s goal is to handle 70 services a day or nearly 500 a week. Baruch projected half of the services will be makeup and nails, and the other half will be hair. Eden by Eden Sassoon features Phyto; VoCe’, created by Amor, and Eden’s brother Elan Sassoon’s brand Sojourn for hair. For makeup and nail polish, it uses Smashbox Cosmetics and Butter London, respectively.

Baruch and Sassoon are planning to put a second location in the Los Angeles area by next year, and Sassoon has ambitions to expand to major cities across the globe. Baruch figures it costs $250,000 to $400,000 to build an Eden by Eden Sassoon location, and units will pull in between $300,000 to $800,000 in profits on revenues of $1.5 to $3 million. “My goal is international. I’m following the Sassoon name around the world,” said Sassoon. “Dad always said, ‘Think big.’”

Before he passed away, Eden Sassoon discussed Eden by Eden Sassoon with her father when it was in its formative stages. Although she said she was confident it was “her turn to take the Sassoon name and brand it, and affect women in my own way,” she still wanted to hear what he thought. She recounted he told her, “‘Don’t have fear. Make it happen. Put everything into it, and do it.’ And that was it.”