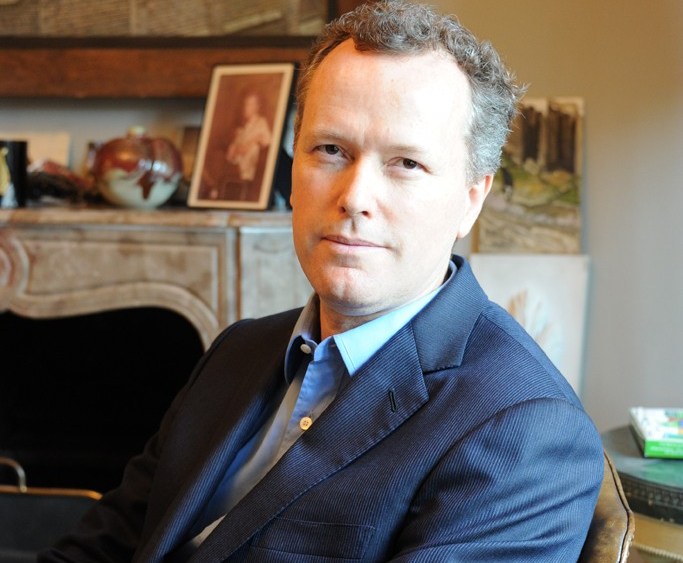 If anyone was set to have a head start in life it was the English novelist Edward St. Aubyn, whose latest, highly acclaimed novel, “At Last” (Farrar, Straus and Giroux) has just been published in the U.S. Born into an aristocratic family whose ancestral seat is St. Michael’s Mount, an island with a castle off the coast of Cornwall, St. Aubyn has gilded connections on both sides of the Atlantic. His mother, Lorna, was descended from rich American industrialists, who the 51-year-old St. Aubyn describes in his quiet, thoughtful way as, “a kind of Jamesian family. Henry James was always writing about American money intermingling with European aristocracy, innocence, and sophistication — that was lived by my American ancestors.”

But from the outset the glittering, carefree life of a good-looking and wealthy aristo was not to be. St. Aubyn’s father Roger was a monster, an angry, violent man who sexually abused Edward from age 5 until the boy mustered the courage to confront him at age 8. His mother was weak, damaged, and utterly neglectful of her son. By the time St. Aubyn was a teenager, and studying at the prestigious Westminster School in London, he was hooked on heroin, a habit that lasted through his days at Oxford — he famously snorted it through the plastic husk of a Bic pen during his final exams — and into his twenties.

After cleaning himself up and undergoing psychoanalysis, St. Aubyn finally faced the fact that he had a story to tell — and that it was not pretty. In the early Nineties, he published his first novel, “Never Mind,” which depicted the abuse he suffered as a child, and then wrote two sequels, “Bad News,” and “Some Hope,” following the same character, Patrick Melrose, as he grew into a drug-addicted, emotional wreck. The trilogy — whose heavy themes are regularly leavened by St. Aubyn’s dark, dry sense of humor — are known as “The Patrick Melrose Novels.” He later wrote about Patrick’s midlife crisis in “Mother’s Milk,” which was short-listed for the Man Booker Prize in 2006. St. Aubyn admits he spent much of his youth trying to write a novel, but he never made it past page 40. “I think psychoanalysis helped me indirectly. I had always been trying to write, so I think becoming relatively sane made it easier to finish the novel. Also, to own up to my true selfhood because the [past] novels, which only got to page 40, were attempts at being clever — and cleverness is irrelevant,” he says.

It is a cold and dusky winter afternoon, and St. Aubyn is sitting in the living room of a friend’s flat in Holland Park, a wealthy west London neighborhood. Dressed in dark trousers and jacket, and blue suede loafers, he’s the picture of the polished urban aristocrat who may have just returned from lunch at the members-only Harry’s Bar or Mark’s Club in Mayfair and now was whiling away the afternoon reading Country Life before getting dressed to go out to a dinner party. But there’s nothing

smug or patronizing about him, and his self-deprecating humor — and neurotic edge reminiscent of a young Woody Allen — are evident from the get-go. He wrote his first book, he says, with a towel around his waist because he was sweating so much, and has always considered writing to be arduous.

And don’t get him started on public speaking — he never did any publicity for his first five novels because he couldn’t bear the thought of addressing his public. “I just had this paranoid conviction that I would be attacked and humiliated, and so I didn’t talk at all until after the publication of ‘Mother’s Milk,’ which was my sixth novel.” (His other, non-Melrose novels include “A Clue to the Exit,” and “On the Edge”).

St. Aubyn still doesn’t love public speaking, but he’s getting better at it. He’s currently in the U.S. to promote the book, which has won rave reviews on both sides of the Atlantic.

“At Last,” the final Patrick Melrose book, where the main character finds a kind of peace, takes place during the funeral and after-party of Patrick’s mother Eleanor, a nutty philanthropist and New Age acolyte who spent a lifetime opening her arms to everyone but her son. Like “Mother’s Milk,” much of it is stream-of-consciousness narrative — the reader gets to live inside Patrick’s complicated head and in the minds of characters including the family’s snipey old friend Nicholas Pratt, and uppity Aunt Nancy, a woman “looking exhausted by her own haughtiness, as if her raised eyebrows might not be able to stand the strain much longer.”

St. Aubyn’s abiding themes — of addiction, recovery, loss, crushing emotional pain and the desire for release and, ultimately, freedom — all come to the fore. Shortly after hearing of his mother’s death, Patrick thinks to himself, “In a sense he had been missing her all his life. It was not the end of closeness but the end of the longing for closeness that he had to mourn.” Even though he penned “At Last” two decades after bringing the young Patrick Melrose to life, it was no easier than the others to get down on paper.

“The Melrose novels have all been very hard to write,” he says. “Sometimes more emotional reasons, sometimes more practical reasons but always very, very hard. I think that is because of the nature

of the material — in an obvious way — but also because I am trying to get access to something that is hidden, hidden from me and that is bound to be hard.”

But St. Aubyn is open to change. He’s already at work on a new novel, and he’s vowed to break a few old habits: “My novels have always been very slow, very painful texts and I wanted to write a fast, improvised novel. I have this absurd idea that maybe I could enjoy writing something that people can enjoy reading, rather than absolutely loathe writing something over the course of five years which then some people like,” he says with a quiet laugh.

“For me, the idea of enjoying writing is so ludicrous that I have given myself that challenge. I have never enjoyed writing; I have always found it an agonizing obligation. But this time I am determined to enjoy it — obviously the dread is this reversal. At last! The novel I enjoyed writing, but that no one can be bothered to read. But I am hoping it is not a reversal of the existing equation, but in fact a new formula.” And another sort of freedom, at last.