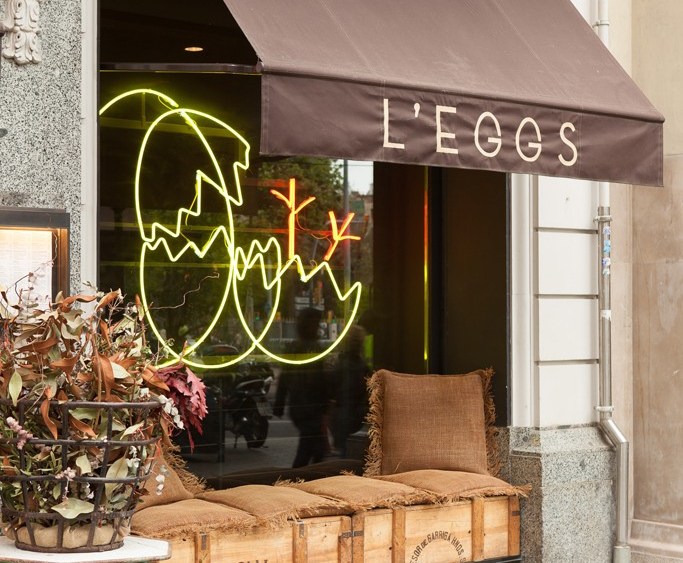 BARCELONA — Catalan chef Paco Pérez has taken the egg, organic or farm-fresh and humble as it is, to new gastronomic highs.

Open less then a year on the Passeig de Gràcia — a block north of Stella McCartney and Louis Vuitton — this city’s hot new eatery L’Eggs turns out award-winning egg dishes, such as fried and scrambled eggs with sea cucumbers or Andalusian-style baby squid and tartar sauce. Such updated and traditional dishes as duck eggs in a chile crab sauce or Eggs Benedict with gutsy Ibérico bellota ham are available, as are puffy, oversized omelets with regional black butifarra sausage and goat cheese. “They’re not as big as they look,” said Carola Rucabado, communications and events manager. “The secret is in the whisking.”

Everything is made on the spot and the most complicated dish is a trio of quail eggs on grilled bone marrow flecked with chilli peppers, she said.

Pérez honed his skills alongside Spanish icons Ferran Adrià and Joan Roca. Currently he helms La Enóteca in Barcelona’s oceanfront Hotel Arts, which has two Michelin stars; Miramar on the Costa Brava, which also has two stars, and, since 2012, restaurant 5-Cinco in Berlin’s boutique hotel Das Stue, which has one Michelin star.

At his Barcelona eatery, even cocktails come with eggs, such as Watermelon Temptation, a gin and fresh watermelon concoction with mint, a pinch of sugar, black pepper, Perrier water — and the white of an egg.

Designed by Catalan interior decorator Toni Espuch, L’Eggs has a cozy farmhouse feel with banquettes and cushions in woven kilim patterns and upholstery fabrics, knotty antique wooden tables, distressed metal and recycled materials, papier-mâché chicken-head wall hangings, ostrich eggs and a long marble-pinewood bar with industrial lighting. There is a view through colored glass of the cooks in action, a small outdoor terrace and, downstairs, a late-night bar with live music will soon debut.