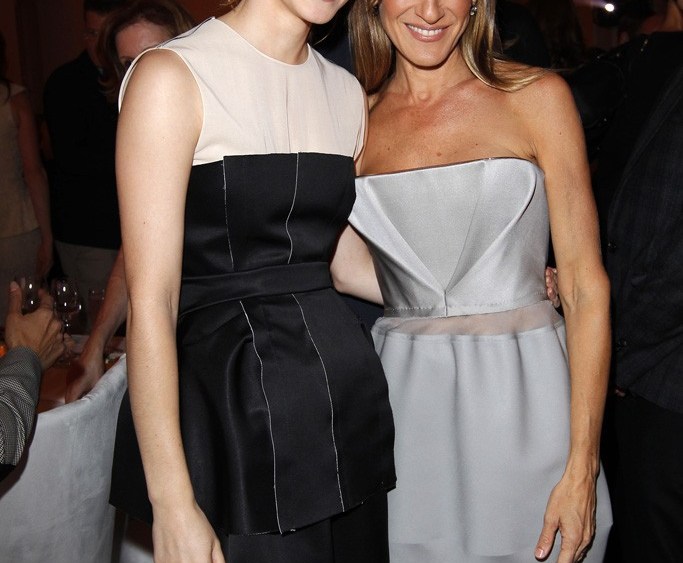 Host Joel McHale, who was game to meet the comedic standard set by past host Alec Baldwin, got the evening rolling with jokes about the all-white decor in the Four Seasons Beverly Hills ballroom. “With all the red wine already spilled, you have no idea how much club soda it takes to keep this place clean,” he said, referring perhaps to the giant red splotch that was quickly removed between his table and the one seating Spencer, Emma Stone, Allison Janney, Viola Davis and Ahna O’Reilly. Testing the audience’s limits, he added, “These chairs are so white some of them have already voted for Mitt Romney.”

It drew laughs, as did most of his one-liners except for a crack about Lindsay Lohan and Amanda Bynes working the valet.

The real draw at the yearly event is typically the presenter and honoree speeches, usually the most dreaded part of a Hollywood gala, but here eagerly anticipated for their emotional sincerity or comic relief. Francisco Costa, there to represent presenting cosponsor Calvin Klein Collection (L’Oréal Paris also sponsored), said it was one of his favorite events to attend. “It’s fun and honest and great to see all the women in our clothes,” he said, as Rashida Jones, Zoe Kazan, Teresa Palmer, Jamie King and Julianne Hough took their seats at his table.

Susan Sarandon admitted she resorted to going on the Internet to find appropriate quotes. “I found one by Virginia Woolf; I thought she’d be good,” she began. She ended with Mark Twain “who’s not a girl, but still a pretty great guy.” Fanning charmed the crowd with her youth, Watson with her poise and Thurman with her moxie. Thurman also had the benefit of being introduced by her “Bel Ami” costar Robert Pattinson, who quipped, “I’ve been learning to read just for this. It’s terrifying.”

There were also tears from Spencer and nervous laughs from Wiig, who had the crowd roaring when she admitted she was having digestive issues because of her nerves.

When MacLaine finally got up on stage to accept the last honor at 11 p.m., she said, “I have so many people to thank, but they’re all dead. Don’t worry, I’ll catch up with them later.”

Speaking from years of experience, MacLaine described the benefits of approaching life like a movie production, and ended with a graceful acceptance of aging in Hollywood: “I’m ready to give up my key light and my filters because I like the idea of entering the Jessica Tandy phase of my future.”