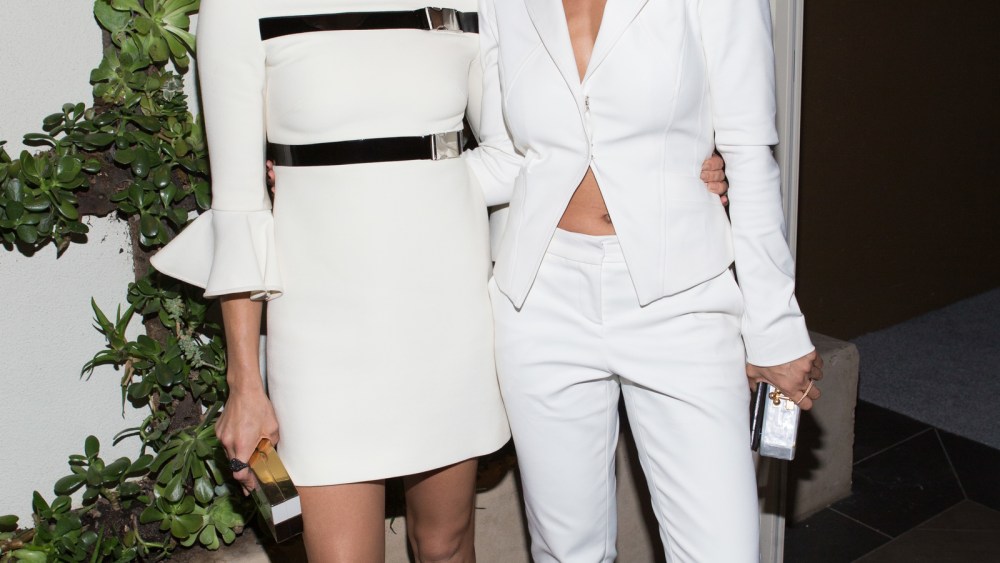 “Oh! It’s raining,” exclaimed Kate Winslet, as she arrived on Monday night to the Four Seasons Hotel in Beverly Hills for Elle’s 22nd annual Women in Hollywood gala. The actress’ handler attempted to shield the honoree as she made her way inside.

The light drizzle didn’t dampen the spirits of fellow guests like Dakota Johnson, Salma Hayek, Amy Schumer, Ava DuVernay, Carey Mulligan and Alicia Vikander, who each appeared on this month’s magazine cover in addition to being honored with awards at the dinner hosted by Elle’s Robbie Myers and Kevin C. O’Malley.

What did the recognition mean to Schumer? “It means that I had to get hair and makeup,” she deadpanned, “and that I get to see some of my friends. I’m going to try not to drink too much.” Still, the “Trainwreck” writer and headliner got serious as she discussed finding her voice: “When you start out, you’re like, ‘I just want to get a job,’ and then you start to feel more powerful and, like, you really do have something to say.”

Zoë Kravitz, for one, couldn’t wait to hang on her every word. “Amy Schumer is one person I’ve never met who I’m a huge fan of. I’m excited to hopefully say hi to her,” she said, before reflecting on the current state of Hollywood affairs. “I think there’s a big movement going on right now within the film industry and the entertainment industry with women.”

Calvin Klein’s Francisco Costa was happy to throw his support as a sponsor behind the group, many of whom metamorphosed with help from fellow sponsors David Yurman and L’Oréal. “I love the talent,” he said, flanked by tablemates Kiernan Shipka and Miranda Kerr. “I find the night very wholesome, very inspiring, very cool.” He could very well be describing Johnson, who received the Calvin Klein Spotlight Award. “She’s truly special, right? She’s breaking all the rules, which is very much Calvin. It’s very much what we love and what we stand for.”

The presence of other daring actresses such as Shailene Woodley and Meryl Streep overwhelmed Vikander. “It’s quite surreal,” she said. “I can’t wrap my head around the fact that I’m in this group.”

Even Mary J. Blige had to pull herself together. “I’m a little nervous,” Blige admitted, as she introduced DuVernay, who recently directed her in an Apple Music commercial. Ever the cheerleader, DuVernay told the crowd, “I wanted her to do this because I want [her] to get out more in these kinds of rooms. She’s a great actress, everyone! Look at this woman!”

Leslie Mann, who came to honor her “How to Be Single” costar Johnson, couldn’t escape a bout of butterflies either. “Oh God, You’re still here,” Mann said, attempting to look away from Streep. “Not that I don’t want you to be here, but Meryl Streep is looking right at me. I’ll just look this way. I just thought you might go because you have other things to do.”

Later, Johnson told the audience, “Leslie and I were sitting over there earlier and we both spotted Meryl across the room and I just went, ‘F–k,’” she sighed, looking out at the Oscar winner. “I can see you sitting there. Always in the front. Right there. So beautiful.”

Streep definitely earned their respect as one of the unshakeable matriarchs in Hollywood, and she couldn’t resist reflecting on the entertainment industry. “You really have to admit that if they had this great big meeting once a year and they called it ‘Men in Hollywood’ and they had, like, 17 percent women there who felt besieged and awkward and they gave a lot of awards to the men of Hollywood, we would be pissed,” she said. “Oh, wait. They have those meetings. Every day. In every city. In every country of the world. So never mind,” she said, as the crowd roared.

“I need to acknowledge this as a massive pinch-me moment,” said Mulligan, who gave birth a month ago to daughter Evelyn with husband Marcus Mumford. “The last couple of weeks have been, um, pretty stressful. Doing press [for “Suffragette”] and doing it with a tiny baby. Timing has been very important and babies do what they want, which is a challenge, but it’s really helpful when you have Meryl Streep backstage at events shouting at people on your behalf, telling them to ‘hurry the hell up because we’ve got a nursing mother here.’”

Zoe Saldana could feel her pain. “I’ve been so inspired with all of your long speeches,” she said. “Not to diss you. It’s just that it’s way past my bedtime. I am raising twins and they’re teething and beating the crap out of each other. I need help. I need advice.” She paused. “Anyway, it’s not about me,” she sighed, before presenting the final honoree of the night.

“It really sucks to be the last,” Hayek said. “Everybody is tired. Everybody drank too much. They want to go to the bathroom. Please drink some coffee. I’ve been waiting all night to get up here,” she pleaded, proceeding to tell the crowd about her personal experience with overcoming adversity in Hollywood. Those who made it through her inspiring, 20-minute speech were in luck as Hayek had a surprise in store for the entire audience. She’d taken the liberty of commissioning 251 signed limited-edition “butterfly” prints created by artist Paris Reid.

“Don’t toss it away. She’s getting more and more expensive by the minute,” warned Hayek. “I wanted to do a butterfly to remind everyone that when adversity and trouble and chaos knocks on your door and you feel like you are being diminished as a worm to not worry. It only means that you’re just about to fly.”

This brought Streep to her feet. Before the crowd flew to valet.