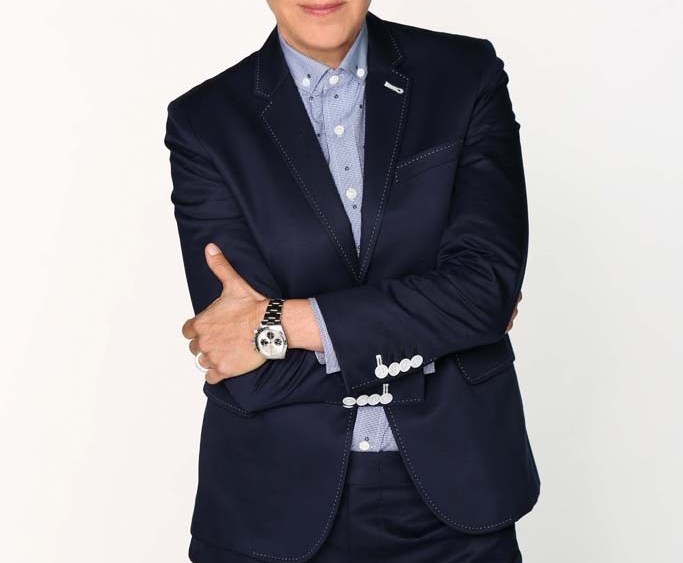 “I wouldn’t be doing this if I didn’t want it to be the biggest brand name that you can imagine.”

“This” is E.D., DeGeneres’ nascent lifestyle brand launching with a gift-oriented capsule collection for holiday. Despite the obvious invocation of DeGeneres’ initials, the brand’s name is Ed (like Koch, Sullivan and Wilbur’s chatty horse from the long-ago sitcom), a nickname bestowed on DeGeneres by her wife, Portia de Rossi. As for the dots, they’re more design elements than punctuation.

Fully realized, E.D. will encompass categories from home to fashion to chic wares for some of DeGeneres’ favorite friends — dogs and cats. And she’s thinking big. “I’m not trying to launch a little boutique situation,” DeGeneres told WWD over lunch on New York’s Upper East Side. To that end, she calls the project her “next phase,” one she expects to flourish and occupy her professional attentions full-time, long after her talk-show days are done.

She’s not in it alone. DeGeneres is partnering with J. Christopher Burch of Burch Creative Capital, the flamboyant, idiosyncratic private equity group through which Burch has launched and-or invested in a range of endeavors, from tiny to huge, in various disciplines — fashion, technology, resorts. Marisa Gardini, most recently longtime president and chief executive officer of Isaac Mizrahi, has signed on as managing partner (that’s code for president with an equity stake). In addition, an experience-rich board has been assembled, with Michael Francis, chief global brand officer of DreamWorks Animation and former global chief marketing officer of Target Corp., and Janet Grove, former chief executive officer of Macy’s Merchandising Group, as members with equity stakes. Francis was instrumental in bringing the sides together. “I feel like it’s the most amazing team, an all-star team,” DeGeneres said.

On the front end for Burch, the people mattered more than the project specifics. “My strategy in everything I do is to work with incredible people,” he said in a separate interview. “I want to work with the most talented, extraordinary, unusual and creative people in the world.”

Burch maintains he wasn’t looking for another project of any kind — “I’m exhausted” — let alone one fashion-oriented. “For some reason, everyone in our industry thinks I’m [just in fashion]. I’m really not. I have 50 other things I do on a daily basis. Yes, I’ve invested in a lot of entrepreneurs in our industry. [But] I’m in technology in every category. My resorts, I really enjoy. So for me I really wasn’t looking for anything.”

Still, the man hasn’t gotten rich by brushing off the likes of DeGeneres, especially when the contact came through Gardini, a trusted, industry-savvy friend. She introduced Burch to Francis who knew DeGeneres — and knew her to be a longtime student of aesthetic disciplines and a skilled, if technically amateur, design practitioner, particularly on the home front. With an impressive track record of renovation-decoration-flipping for profit (albeit unintentionally), DeGeneres had long mulled a design-centric business. Her most recent flipping success made news this week. On Monday, TMZ reported that DeGeneres on Thursday closed on her sale of the famed Brody House in Los Angeles — which she bought in December for $40 million and spruced up — to Napster cofounder Sean Parker for $55 million.

When they met, Burch was impressed by DeGeneres’ passion and vision. He sensed immediately that they could develop an important collaborative business. “This is not a ‘we give Ellen a percentage of sales,’” he said. “We are aligned at every level, her team and my team.

“I knew Ellen was loved by everybody, but I didn’t understand the depth of [her public perception],” Burch continued. “People see who she is, what a wonderful person she is and how much she gives back. Everyone responds to her — you’re a man, you’re a woman, you’re a mom, you’re a working mom — she brings a happiness and a light and a true authenticity.”

The “A” word. Both Burch and DeGeneres voiced it numerous times. Everything around Ellen the celebrity — the dancing, do-gooding, suit-wearing, audience-connecting, underdog-loving, bigotry-hating, pet-loving, quip-delivering, comfortable-with-tears, first-name-sufficient celebrity — feels authentic, an aura essential to her public persona. After two hours of conversation, one senses that the authenticity runs far deeper than celebrity shtick, that it’s, well, authentic. “I just do what I do,” DeGeneres said, probably oblivious that she’d invoked the mantra of one of fashion’s greatest (and interestingly, given her ambitious aspirations, most successful) individualists, Ralph Lauren.

E.D. will launch in late October/early November with a capsule home decor product range that takes the name of the holiday-selling season to heart. Designs and gift-worthy packaging are still being tweaked for the lineup of tabletop (sets of mugs, dessert plates, coasters, a bar set with ornamented stirrers), unusually shaped candles and top-of-bed (decorative pillows, throws) as well as gift wrap and ornaments. The only apparel offering: a pj’s-and-slippers set. Distribution will be online through a major retail partner. At press time, that deal had not been finalized.

The full launch, inclusive of a broader home-and-garden range, women’s and men’s clothes and accessories and pet niceties, will take place for the spring. (DeGeneres was intentionally cryptic about the latter: “I don’t want to be specific because I don’t want people stealing my ideas.”) Decisions are being made about which categories to produce directly, and which through licensees. On the table: sunglasses, footwear and watches. As for handbags — expect Ellen-esque totes rather than a traditional shopper-hobo-clutch approach.

Though exact pricing is in the works, the point of the project is accessibility. The home portion would be competitive with Martha Stewart. “My goal is that people can have a beautiful house, a really comfortable house, without only being able to afford [very expensive] things,” DeGeneres said. Regarding the clothes, “price point will be midlevel. As far as who it’s for, I think it’s for anyone. I hope that what I wear is [versatile].”

Distribution will be online and brick-and-mortar through partners. In addition, E.D. is investing heavily in developing its own e-commerce site, which will have cross-device mobile capability, to go live sometime in the spring. This will carry the entire range of products, including pricier halo items exclusive to the site. While the 2015 marketing plan includes a pop-up or two, there are no current plans for permanent vertical brick-and-mortar stores, though that could change.

“We’re taking an omnichannel approach,” Burch said. “We’ll work with great partners all around the world. We’ll launch initially with one, and we’ll move from there to other categories, other things.” Distribution will remain domestic through 2015, after which expansion could move swiftly. DeGeneres’ show has given her a strong profile in some attractive markets, including China and Dubai.

The capsule launch isn’t a far leap for a woman obsessed with matters of home and decorating who has, accidentally, become something of a real estate guru — making a lot of money along the way. DeGeneres’ interest in architecture and design has been well covered. Several of her homes have been featured in shelter magazines, and, in April, the New York Times chronicled her impressive real estate acquisitions, renovations and sales, including her purchase of the celebrated Brody House, built in 1949. “We feel like custodians to an important piece of architecture,” she told the Times. (And she no doubt meant it, until Mr. Napster came knocking.)

It’s an interest long-held. Growing up, DeGeneres moved frequently — always from one rental apartment to another, never to a house — and each time set out to decorate the bedroom of her adolescent dreams with almost no budget and access to a single design reference: Pier 1 Imports. Hence her focus on accessibility. “You’re only able to put your house together within a certain budget if you have access to certain things and if you’re educated about them,” she said.

DeGeneres knows. She is well-versed in the design currents of both fashion and the home, an affinity not lost on Burch. “Ellen will drive the design and merchandise process,” he said. “I’m fortunate to be creative and have a little bit of business sense, but in this case, it’s Ellen’s vision. We’re here as collaborating partners to make sure we accomplish her vision through sourcing, through all of the different things needed [to develop a brand].”

DeGeneres is game, whatever it takes. “It’s going to be interesting over the next three or four years, to really establish the business in addition to doing my show,” she said. “It’s a whole new chapter. My life has gone to places…it’s pretty amazing.”

In terms of her standards of success, nothing short of amazing will do. “They say we’re going to be on another planet soon, right?” DeGeneres mused. “I’m going to be the first brand on that planet.”