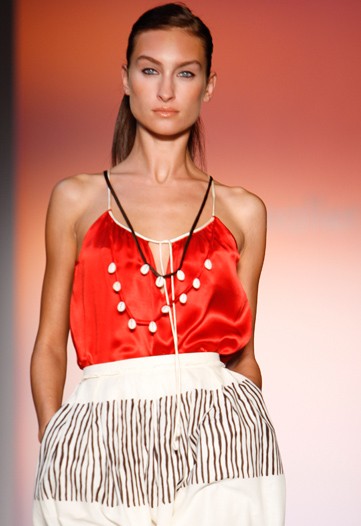 Tried-and-true designers like Oscar de la Renta and Diane von Furstenberg have their loyal followings, but a wave of lesser-known names will be cementing their presences in the months ahead.

Sophie Theallet, this year’s winner of the CFDA/Vogue Fashion Fund Award, should draw some attention as she tries to make the most of her $200,000 cash prize and yearlong mentorship. The Brooklyn, N.Y.-based designer is adding knitwear to her boho-luxe label and may collaborate with Manolo Blahnik for footwear to be sold in stores. In February, he will once again provide the shoes for her runway show at the Altman Building.

Also count on CFDA/Vogue Fashion Fund finalists like Alabama Chanin’s Natalie Chanin, Wayne’s Wayne Lee and Ohne Titel’s Flora Gill and Alexa Adams to try to parlay their recognition into stronger sales. After being nominated, Ohne Titel received some last-minute spring orders from stores and inquiries for fall, according to partner Stephen Courter. As is the case with some other up-and-comers, the designers are getting their names out there in nontraditional ways. The designers will unveil a photography-related project this spring, but he declined to reveal details.

Industry observers will be keeping tabs on ready-to-wear designer Jeffrey Monteiro, who is said to be in the running to take the lead design job at Bill Blass to relaunch a women’s collection there. This spring, Monteiro will introduce footwear inspired by his clothing collection.

Prabal Gurung, who honed his chic and sophisticated design skills at Bill Blass and Cynthia Rowley, has quickly attracted his share of fans, including celebrities such as Demi Moore, Leighton Meester and Oprah Winfrey. Gurung is expected to wrap up plans for a new collaboration or two in the next few months.

With a burgeoning dress business at stores such as Bergdorf Goodman, Harrods, Joyce and Corso Como Milan, Victoria Beckham will be drawing upon that momentum by relaunching her denim and sunglasses businesses. Her brand name should get a further lift in January when she appears twice as a guest judge on “American Idol.” Like Ashley and Mary-Kate Olsen, who design The Row and Elizabeth & James clothing labels, Beckham is among the few celebrity designers holding their own on the fashion front as opposed to just trading off their stardom.

Though considerably lower-profile, there is a tier of up-and-coming designers who are less inclined to promote themselves, such as Jean Yu, Koi Suwannagate and Costello Tagliapietra’s Jeffrey Costello and Robert Tagliapietra. The latter pair work side-by-side in their Carroll Gardens apartment, sewing such intricacies as bias-cut organza seams in dresses for Barneys New York and private clients. They are hopeful the recession will make shoppers more inclined to appreciate their handwork and invest in their pieces, which they say can be worn for years, as opposed to the highly stylized options that others create. “At some point, you have to ask, ‘Do you really want to look like a science experiment?’” Costello said.

Yu plans to start posting online images of the interior of her dresses as well as the exteriors. “By showing the inside of the garments they can be seen as [art] objects. That is wholly missed by using a picture of a pretty girl wearing your clothes.”