The tech industry might be upping its fashion game, but that doesn’t mean the sector’s hoodies, jeans and sneakers are going anywhere.

While hardly rating on the style Richter scale, the ultra-casual hoodie and jeans combo is the iconic Bay Area look for the digital age. And there is good reason for that. Within those loose, baggy outlines lie familiarity and casual comfort that don’t distract from the work at hand and perhaps a rejection of the notion of growing up (or what growing up used to mean and how it was signified to previous generations).

The hoodie acts as both uniform and blankie.

“The T-shirts, hoodies, jeans — you still see a lot of that, especially with coders and engineers,” said one tech contractor who works in Silicon Valley. “They’re really proud of where they work, so there’s a lot of company logos.”

And whatever cat fights and rivalries heat up among the giants, he doesn’t see it extend to staffers’ closets. “There are a lot of Ts from other companies,” he said. “There’s no hesitation to wear those at all.”

The style choices might well be an extension of the sector’s broader psyche. In the youth-driven culture of Silicon Valley, a suit and tie just doesn’t say “disruptor,” but screams dusty corporate establishment. So, naturally, some tech workers have an aversion to buttoned-up garb.

“It’s irreverence,” said James Krohn, a personal shopper at Neiman Marcus who has tracked trends and dressed clients for 30 years across the Bay Area and New York. “I find that high-tech clients love collaboration. Having a brand that is a solo voice [points to a] more traditional fashion system. So collaboration is important. It creates newness all the time.”

He pointed to examples like Gucci Ghost, an homage to the luxury brand that led creator and graffiti artist Trevor Andrew to work with the company. Today, Krohn looks to joint footwear ventures, such as Raf Simons’ work with Adidas.

If collaborations are hot right now, then sneaker collabs are absolutely smoking. Footwear is often the one weakness for the hoodie-clad set.

According to tech workers polled by WWD, usual suspects such as Adidas and Nike make the grade, but they aren’t alone. Santa Ana, Calif.-based Vans sneakers remain popular, as are woolen comfort kicks from San Francisco’s Allbirds. Honorable mention also goes to Brooklyn, N.Y.-based Greats, while Atom, a Y Combinator-born shoe start-up, has been attracting some interest. The latter makes no-logo shoes in quarter sizes that stand somewhere between dress shoes and sneakers.

In addition to footwear mash-ups, Krohn said cross-body bags, relaxed fits and elastic waists are all popular. It’s all about comfort.

That casual looks rule should surprise no one. It flows from the top down, with the c-suite setting the example. Facebook’s Mark Zuckerberg usually opens the F8 and Oculus developer conferences in a T-shirt and jeans; Google’s Sundar Pichai frequently wears track jackets paired with sneakers for fireside chats and keynotes.

It might not seem like it, but these are calculated acts of fashion. Zuckerberg’s Ts reportedly come from Brunello Cucinelli, and Pichai wears Lanvin sneakers. They — and all the other current tech titans — learned from the master of image, the late Steve Jobs, who turned the black turtleneck and Levi’s into an iconic uniform. The thing was, those turtlenecks were designed by Issey Miyake.

This is how high-powered leaders dress to impress the technorati — broadcasting casual “geek” cred, but with a premium twist.

Apparently, Cucinelli has plenty exposure to other top tech names and is nudging them forward.

The luxury brand’s chief executive officer, Brunello Cucinelli, said he met for two hours with Amazon founder Jeff Bezos as part of the Dreamforce Conference in San Francisco in September. Bezos was wearing a jacket without a tie.

“He asked me for [wardrobe] advice,” Cucinelli said on a conference call with analysts after the Italian luxury brand reported another quarter of stellar growth.

Cucinelli pointed to Bezos and said there is still plenty of opportunity for the brand’s men’s wear and said he attended a dinner during the trip with 19 wealthy young men, who all wore jackets. (Bezos, who is technically not in Silicon Valley but Seattle, has drawn attention for not just going casual, but for going to the gym with a buffer profile than when he founded the tech giant in his garage). 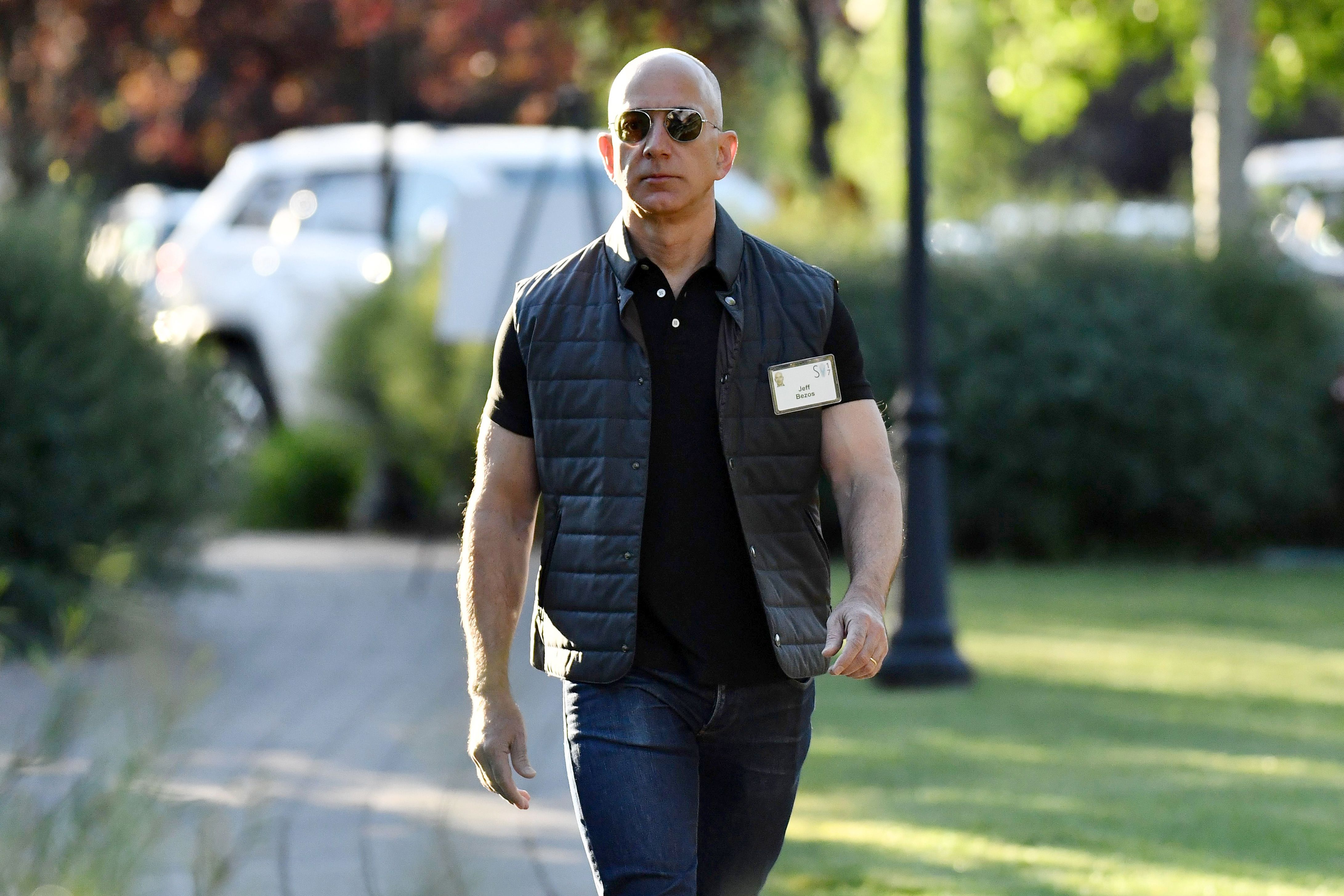 “There is a need for a fresher product,” said Cucinelli, adding that businessmen still need suits, but with modern details. “And they need someone to advise them. You don’t know how many wives of rich men ask us to help their husbands to wear clothes that look fresher.”

But clearly the top tier in Silicon Valley have a dressed-up mode — if for nothing else than to appear on Capitol Hill and justify their business practices. When Facebook’s Zuckerberg and Google’s Pichai appeared before Congress this year, they both suited up and wore ties.

It’s tempting to paint tech companies and their employees with a broad brush, but they’re not all the same.

Plenty of examples defy the stereotype: Jack Dorsey of Twitter and his preference for Dior Homme dress shirts, for instance, or ex-Yahoo ceo Marissa Mayer’s fondness for Alexander McQueen. And there’s a distinction between popular looks in San Francisco and the Valley, said stylist Victoria Hitchcock of Victoria Hitchcock Style, a fashion and lifestyle consultancy in San Francisco and Silicon Valley. (“They take more risks,” she said of the city, particularly when it comes to color.)

For Hitchcock, who has been dressing everyone from venture capitalists to tech employees at places like Apple, Facebook and Google for some 20 years, polish matters. It’s especially crucial for certain types of professionals, like those who meet with external clients, regularly travel beyond the Bay Area or harbor executive ambitions.

For one client, it was a literal matter of form meeting function. “She said, ‘I’m going to three different speaking engagements. I’ll be photographed, I’ll be in social media. I’m meeting with brilliant people,’” Hitchcock said. “We figured out what we wanted. The goal was to have her look as sharp from the outside as she was on the inside.” For others, the idea is merely to take the tech costume or streetwear looks up a few notches — like a more premium version of itself that still manages to look effortless.

There’s one caveat: Hitchcock tries to get her clients out of the Vans and Allbirds whenever she can. As young consumers riding high on opportunity and high salaries, they can afford designer fare.

The effort might be better received now than ever, thanks to a fashion awakening that has increasingly allowed for hoodies and heels. The region has come to host its own fashion week, a growing array of premium stores like Jeffrey, and a wave of creative fashion start-ups and new brands. Those facts aren’t lost on the well-salaried tech workers here, some of whom drive the tools responsible for much of that momentum.

“It’s common for someone to say, ‘I want to stand out. I don’t want to look like everyone else,'” Hitchcock said. “’I don’t want to just be under the radar because I was afraid of standing out or it clashed with priorities, in regards to education, focus or social issues.’ Now that’s out the door.”

It also helps to have company policies that encourage self-expression.

Facebook, for instance, has a dress code with one fundamental rule: Be yourself. “What we tell people the day they arrive is, we want you to be who you are,” said Janelle Gale, vice president of human resources for the social media giant.

Workers inside the company confirm that the sentiment isn’t just lip service. That can lead to some rather sloppy looks, they say, but others make up for it.

Some employees have even formed Fashion@, a social club where people can share tips, favorite looks and connect based on their common interest, Gale said.

“When you come to Facebook, you’re not some sort of professional version of yourself or made-up version,” she said. “It’s very much based on real identity, which is consistent with our products and that’s everything — from how you operate, how you communicate, how you show up, how you dress.”