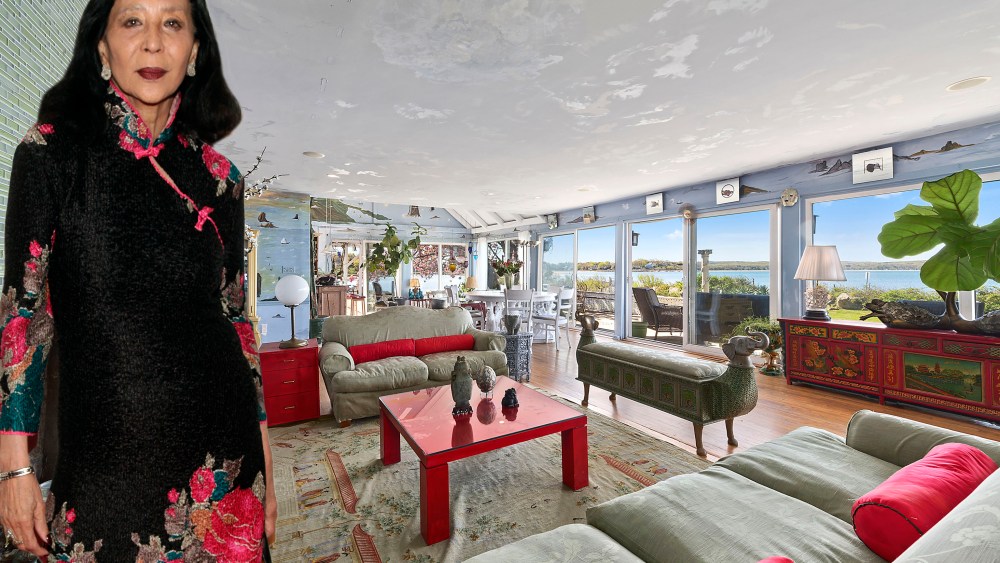 Machado bought the North Haven house in the mid-Nineties and hosted her annual “Party for the Roses” there, where her 100 guests gathered each June to view the gardens full of lush pink roses in full bloom. They no doubt also enjoyed the views over the bay and sunsets thanks to the property’s location on what her daughter, handbag designer Emmanuelle LaSalle, said “feels like its own private peninsula.”

The house was clearly designed to enjoy the ocean views as floor-to-ceiling glass French doors in the conservatory make it feel as if you’re in the middle of the water, while a sprawling wooden deck looks out to the bay.

The interiors of the 3,300-square-foot, four-bedroom contemporary, meanwhile, reflect Machado’s creativity, with Chinese lanterns and a zebra-palm tree taking center stage in the conservatory, while her paintings and photographs adorn the walls in a blue-painted den and her murals fill several rooms.

Other features of the arty home that she shared with her second husband, Riccardo Rosa, include a bocce court, a state-of-the-art kitchen, as well as a plush upstairs master suite with its own balcony and a private living room.

Another downstairs master suite opens up into a secret garden framed by a pink rose wall to the beach, inspired by Machado’s global travels.

One of the first non-Caucasian models to appear on the cover of a major American glossy magazine, the Chinese-born, Portuguese-American model was the longtime muse of photographer Richard Avedon and later became a fashion editor, television producer and painter.

In high demand until her death in 2016 age 86, Machado worked with the likes of Givenchy, Dior, Balenciaga and Oleg Cassini, among many others.