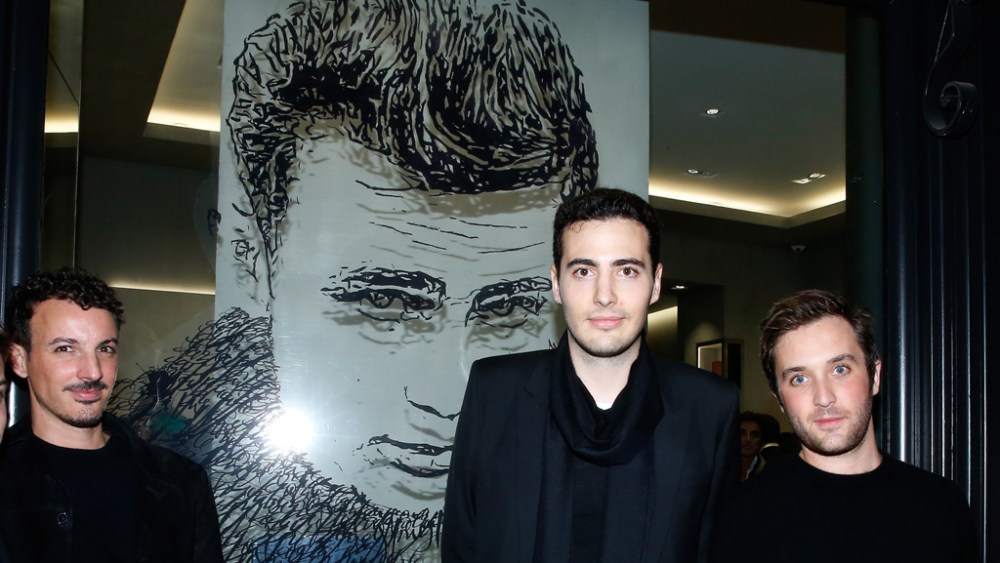 REBEL WITH A CAUSE: “I like James Dean’s attitude: rebellious and classic at the same time,” said Exemplaire cofounder Jean-Victor Meyers. The 29-year-old L’Oréal scion praised the late actor’s penchant for timeless pieces such as reefer coats and black scarves.

Jean-Paul Agon, Betty Catroux, Marie-Agnès Gillot, Alexis Mabille and Amanda Lear were among guests who turned out on Thursday night to the men’s wear label’s Paris flagship at 334 Rue Saint-Honoré to celebrate its first collaboration — with calligrapher of the moment Nicolas Ouchenir.

The limited-edition series of 12 small leather-goods items and a T-shirt is hand-painted by the artist with quotes attributed to Dean, including “Dream as you’ll live forever. Live as if you’ll die today.”

“I found an ink that lasts on leather; it’s very hard to find,” enthused Ouchenir.

“Calligraphy is a major art,” said Agon, who liked Dean’s saying : “Never regret anything that makes you smile.”

Agon said he has known Meyers for 20 years. “He was already tall then,” he smiled.

“James Dean is all that I like: tortured, romantic, moving,” said Catroux, whose favorite quote is “Dance as if no one is watching.”

Mabille favors Paul Newman instead. “He had something raw,” he said.

“We wanted to offer [our clients] the possibility to customize [their leather goods] with something more inspirational than their initials,” explained Meyers.

“We are happy to see the fruit of his work,” said Meyers’ mother Françoise Bettencourt-Meyers, who finds inspiration in Johann Sebastian Bach. “I play the piano; only Bach. I love his writing and polyphony,” she related. “I play every morning; it’s like a breath of oxygen.”

Meyers cofounded Exemplaire with his friend Louis Leboiteux in 2011, focusing the brand on knitwear matching his taste — high-end with a contemporary twist. The duo opened the standalone unit last year.